Encyclopedia
Olkhon is the third-largest lake-bound island in the world. It is by far the largest island in Lake Baikal
Lake Baikal
Lake Baikal is the world's oldest at 30 million years old and deepest lake with an average depth of 744.4 metres.Located in the south of the Russian region of Siberia, between Irkutsk Oblast to the northwest and the Buryat Republic to the southeast, it is the most voluminous freshwater lake in the...
in eastern Siberia
Siberia
Siberia is an extensive region constituting almost all of Northern Asia. Comprising the central and eastern portion of the Russian Federation, it was part of the Soviet Union from its beginning, as its predecessor states, the Tsardom of Russia and the Russian Empire, conquered it during the 16th...
, with an area of 730 square kilometres (281.9 sq mi). Structurally, it acts as the southwestern margin of Academician Ridge
Academician Ridge
Academician Ridge is an underwater, structural high separating two of Lake Baikal's three basins, the Central and North basins. Situated in the central part of the Baikal Rift, it serves as an "accommodation zone", transferring "motion between faults of similar displacement but different orientation"...
.

Olkhon has a dramatic combination of terrain
Terrain
Terrain, or land relief, is the vertical and horizontal dimension of land surface. When relief is described underwater, the term bathymetry is used...
and is rich in archeological landmarks. Steep mountains line its eastern shore, and at 1276 metres (4,186.4 ft) above sea level, Mount Zhima is the highest point on the island, peaking at 818 metres (2,683.7 ft) above the water level of Lake Baikal. The island is large enough to have its own lakes, and features a combination of taiga
Taiga
Taiga , also known as the boreal forest, is a biome characterized by coniferous forests.Taiga is the world's largest terrestrial biome. In North America it covers most of inland Canada and Alaska as well as parts of the extreme northern continental United States and is known as the Northwoods...
, steppe
Steppe
In physical geography, steppe is an ecoregion, in the montane grasslands and shrublands and temperate grasslands, savannas, and shrublands biomes, characterized by grassland plains without trees apart from those near rivers and lakes...
and even a small desert
Desert
A desert is a landscape or region that receives an extremely low amount of precipitation, less than enough to support growth of most plants. Most deserts have an average annual precipitation of less than...
. A deep strait separates the island from the land.

The island's appearance is a result of millions of years of tectonic movement resulting in the hollowing of the channel between the land (Small Sea Strait
Small Sea Strait
The Small Sea Strait is a strait of Lake Baikal, Russia. It separates the Olkhon Island from the Western shore of Baikal. Its length is about 8 km, width is about 1.7 km and maximal depth is 200m.The Small Sea is known to be rich in fish...
) and the block of stone forming the island. The steep slopes of the mountains show the vertical heave of the earth. 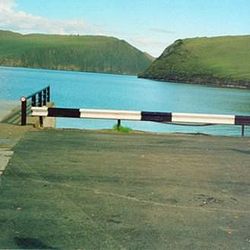 The population of the island is less than 1,500 and consists mostly of Buryats
Buryats
The Buryats or Buriyads , numbering approximately 436,000, are the largest ethnic minority group in Siberia and are mainly concentrated in their homeland, the Buryat Republic, a federal subject of Russia...
, the island's aboriginal people.

There are several settlements and five villages on the island: Yalga, Malomorets, Khuzhir, Kharantsi, and Ulan-Khushin. The village of Khuzhir is the administrative capital of Olkhon, designated as such in April 1987, when the Soviet government issued a comprehensive decree protecting Lake Baikal. Khuzhir is home to about 1,200 residents and boasts a museum of local nature and history.

Most residents are fishermen, farmers, or cattle-ranchers. Due to an increasing number of tourists from all over the world, many residents work in this sector as well, and tourism has become an important part of the economy in Olkhon.

The indigenous Buryats believe the island to be a spiritual place, and on the western coast, close to Khuzhir, is Baikal's most famous landmark, the Shamanka, or Shaman's Rock. Natives believe that Burkhan
Burkhanism
Burkhanism or Ak Jang is a new religious movement that flourished among the indigenous people of Russia's Gorno Altai region between 1904 and the 1930s. Czarist Russia was suspicious of the movement's potential to stir up native unrest and perhaps involve outside powers...
, a modern religious cult figure of the Altai peoples, lives in the cave in this rock. The rock is one of nine Asian Most Sacred Places. The museum at Olkhon, named after Revyakin, exposits on the nature and ethnography of the island, including pipe-smoking and a samovar
Samovar
A samovar is a heated metal container traditionally used to heat and boil water in and around Russia, as well as in other Central, South-Eastern, Eastern European countries,Kashmir and in the Middle-East...
collection.

Olkhon is a sacred shamanist centre and also considered a centre of Kurumchinskay culture of 6th-10th centuries. 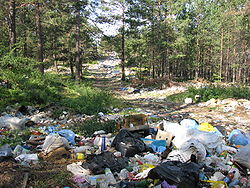 The island has a long history of human habitation. The original indigenous people were the Kurykans
Khanty people
Khanty / Hanti are an indigenous people calling themselves Khanti, Khande, Kantek , living in Khanty-Mansi Autonomous Okrug, a region historically known as "Yugra" in Russia, together with the Mansi. In the autonomous okrug, the Khanty and Mansi languages are given co-official status with Russian...
, forefathers of two ethnic groups: the Buryats
Buryats
The Buryats or Buriyads , numbering approximately 436,000, are the largest ethnic minority group in Siberia and are mainly concentrated in their homeland, the Buryat Republic, a federal subject of Russia...
and Yakuts
Yakuts
Yakuts , are a Turkic people associated with the Sakha Republic.The Yakut or Sakha language belongs to the Northern branch of the Turkic family of languages....
.

One of the most important ecological problems of Olkhon Island is the disposal of household waste
Waste
Waste is unwanted or useless materials. In biology, waste is any of the many unwanted substances or toxins that are expelled from living organisms, metabolic waste; such as urea, sweat or feces. Litter is waste which has been disposed of improperly...
. At present, the waste is disposed of in large piles in forestry near the village of Khuzhir
Khuzhir, Irkutsk Oblast
Khuzhir is a settlement in Irkutsk Oblast, Russia . It is the largest settlement on the island of Olkhon, the largest island in Lake Baikal, Siberia. It has a few thousand inhabitants, and is on the west side of the island....
. The dump is unenclosed, and the tipping
Fly-tipping
Fly-tipping is a British term for dumping waste illegally instead of in an authorised rubbish dump. It is the illegal deposit of any waste onto land, i.e...
process is uncontrolled. Moreover, with recent increases in tourism on the island, new sources of hard rubbish have begun to appear. 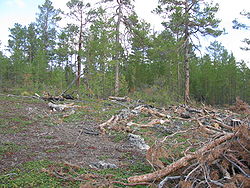 Another ecological concern affecting the island is the illegal felling of timber
Timber
Timber may refer to:* Timber, a term common in the United Kingdom and Australia for wood materials * Timber, Oregon, an unincorporated community in the U.S...
by local inhabitants. A complicated net of forestry roads in the areas adjacent to Khuzhir lead to woodland areas on the mountain slopes. Timber is brought out of the forest at night time, and the deforestation
Deforestation
Deforestation is the removal of a forest or stand of trees where the land is thereafter converted to a nonforest use. Examples of deforestation include conversion of forestland to farms, ranches, or urban use....
is taking its toll on the area.