Khanty appear most likely in Russian records under the name Yugra
Yugra
Yugra was the name of the lands between the Pechora River and Northern Urals in the Russian annals of the 12th–17th centuries, as well as the name of the Khanty and partly Mansi tribes inhabiting these territories, later known as VogulsThe Khanty-Mansi Autonomous Okrug of Russia is also...
(ca. 11th century), when they had contact with Russian hunters and merchants. The name comes from Komi-Zyrian language
Komi-Zyrian language
Komi-Zyrian language, or simply Komi, Zyrian or Zyryan, is one of the two regional varieties of the pluricentrical Komi language, the other regional variety being Komi-Permyak....
jögra (Khanty). It is also possible that they were first recorded by the English King Alfred the Great
Alfred the Great
Alfred the Great was King of Wessex from 871 to 899.Alfred is noted for his defence of the Anglo-Saxon kingdoms of southern England against the Vikings, becoming the only English monarch still to be accorded the epithet "the Great". Alfred was the first King of the West Saxons to style himself...
(ca. 9th century), who located Fenland (wetland
Wetland
A wetland is an area of land whose soil is saturated with water either permanently or seasonally. Wetlands are categorised by their characteristic vegetation, which is adapted to these unique soil conditions....
) to the east of the White Sea in Western Siberia.

The Khanty duchies were partially included in the Siberia Khanate
Siberia Khanate
The Khanate of Sibir were the patrilineal descendants of Shayban , the fifth son of Jochi and grandson of Genghis Khan. The Khanate had an ethnically diverse population of Siberian Tatars, Khanty, Mansi, Nenets and Selkup people. Along with the Khanate of Kazan it was the northernmost Muslim state....
from the 1440s–1570s.

In the 11th century, Yugra
Yugra
Yugra was the name of the lands between the Pechora River and Northern Urals in the Russian annals of the 12th–17th centuries, as well as the name of the Khanty and partly Mansi tribes inhabiting these territories, later known as VogulsThe Khanty-Mansi Autonomous Okrug of Russia is also...
was actually a term for numerous tribes, each having its own centre and its own chief. Every tribe had two exogamic
Exogamy
Exogamy is a social arrangement where marriage is allowed only outside of a social group. The social groups define the scope and extent of exogamy, and the rules and enforcement mechanisms that ensure its continuity. In social studies, exogamy is viewed as a combination of two related aspects:...
phratries
Phratry
In ancient Greece, a phratry ατρία, "brotherhood", "kinfolk", derived from φρατήρ meaning "brother") was a social division of the Greek tribe...
, termed mon't and por, and all members were considered to be blood relatives. This structure was later replaced with clan
Clan
A clan is a group of people united by actual or perceived kinship and descent. Even if lineage details are unknown, clan members may be organized around a founding member or apical ancestor. The kinship-based bonds may be symbolical, whereby the clan shares a "stipulated" common ancestor that is a...
s, where each clan leader (knyazets) negotiated with the Russian realm. They also participated in Russian campaigns, and received the right to collect yasaq (tribute) from two Khanty volosts (districts) respectively. When this structure was no longer needed, Russia deprived them of their privileges.

Between the 17th and 19th centuries, there were attempts to introduce Christianity
Christianity
Christianity is a monotheistic religion based on the life and teachings of Jesus as presented in canonical gospels and other New Testament writings...
, but the Khanty lifestyle did not undergo any real changes. In the second half of 19th century, they gradually accepted state law.

During the Soviet period the Khanty were one of the few indigenous minorities of Siberia to be granted an autonomy in the form of an okrug
Okrug
Okrug is an administrative division of some Slavic states. The word "okrug" is a loanword in English, but it is nevertheless often translated as "area", "district", or "region"....
(autonomous district). The establishment of autonomy has played a considerable role in consolidation of the ethnos (the Western Khants called their eastern neighbours Kantõk [the Other People]). However, in the 1930s concerted efforts were made by the Soviet state to collectivise them. The initial stages of this meant the execution of tribal chiefs who were labelled "kulak
Kulak
Kulaks were a category of relatively affluent peasants in the later Russian Empire, Soviet Russia, and early Soviet Union...
s" followed by the execution of shamans. The abduction by the state of the children who were sent to Russian speaking boarding schools provoked a national revolt in 1933 called the Kazym rebellion
Kazym rebellion
The Kazym rebellion is a revolt by the Khanty people of western Siberia against the collectivisation policies of the Soviet government in 1933. The revolt is named after the small town of Kazym in the Khanty-Mansi Autonomous Okrug...
. 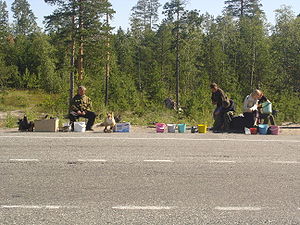 After the end of the Joseph Stalin
Joseph Stalin
Joseph Vissarionovich Stalin was the Premier of the Soviet Union from 6 May 1941 to 5 March 1953. He was among the Bolshevik revolutionaries who brought about the October Revolution and had held the position of first General Secretary of the Communist Party of the Soviet Union's Central Committee...
period this process was relaxed and efforts were intensified in the 1980s and '90s to protect their common territory from industrial expansion of various ministries and agencies. The autonomy has also played a major role in preserving the traditional culture and language.

The Khanty's traditional occupations were fishery, taiga hunting and reindeer herding. They lived as trappers, thus gathering was of major importance.

The Khanty are one of the indigenous minorities in Siberia with an autonomy in the form of an okrug
Okrug
Okrug is an administrative division of some Slavic states. The word "okrug" is a loanword in English, but it is nevertheless often translated as "area", "district", or "region"....
(autonomous area).

Their historical shaman wore no special clothes except a cap.

The Bear Celebration is being celebrated occasionally after a successful hunting of a bear. The bear celebration continues 5 or 6 days (the duration depends on the sex of the animal). Over 300 songs and performances occur during a Bear Celebration.
The most important parts of the cult are:

- Ily Vukhalty Ar (The Coming Down From The Sky Song) - The story about the son of Torum (the sky god). The son was sent by Torum to rule the Earth. He has forgotten father's advices, lost his immortality, turned into a beast and has been killed by the hunters.

- Il Veltatty Ar (The Lullaby)
The Crow cult - the Spring celebration is being celebrated in April, nowadays it is April 7th, the same day as the Annunciation day.