Encyclopedia
Warsaw's Old Town Market Place is the center and oldest part of the Old Town
Warsaw Old Town
Warsaw's Old Town is the oldest historic district of the city. It is bounded by Wybrzeże Gdańskie, along the bank of the Vistula, and by Grodzka, Mostowa and Podwale Streets. It is one of Warsaw's most prominent tourist attractions....
of Warsaw
Warsaw
Warsaw is the capital and largest city of Poland. It is located on the Vistula River, roughly from the Baltic Sea and from the Carpathian Mountains. Its population in 2010 was estimated at 1,716,855 residents with a greater metropolitan area of 2,631,902 residents, making Warsaw the 10th most...
, capital of Poland
Poland
Poland , officially the Republic of Poland , is a country in Central Europe bordered by Germany to the west; the Czech Republic and Slovakia to the south; Ukraine, Belarus and Lithuania to the east; and the Baltic Sea and Kaliningrad Oblast, a Russian exclave, to the north...
. Immediately after the Warsaw Uprising
Warsaw Uprising
The Warsaw Uprising was a major World War II operation by the Polish resistance Home Army , to liberate Warsaw from Nazi Germany. The rebellion was timed to coincide with the Soviet Union's Red Army approaching the eastern suburbs of the city and the retreat of German forces...
, it was systematically blown up by the German Army
Wehrmacht
The Wehrmacht – from , to defend and , the might/power) were the unified armed forces of Nazi Germany from 1935 to 1945. It consisted of the Heer , the Kriegsmarine and the Luftwaffe .-Origin and use of the term:...
. After World War II
World War II
World War II, or the Second World War , was a global conflict lasting from 1939 to 1945, involving most of the world's nations—including all of the great powers—eventually forming two opposing military alliances: the Allies and the Axis...
, the Old Town Market Place was restored to its prewar appearance. 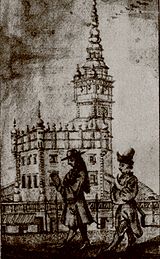 The Old Town Market Place is the true heart of the Old Town, and until the end of the 18th century it was the heart of all of Warsaw. It originated in the late 13th century, at the same time the city was founded. Here the representatives of guilds and merchants met in the Town Hall (built before 1429, pulled down in 1817), and fairs and the occasional execution were held. The houses around it represented the Gothic style
Gothic architecture
Gothic architecture is a style of architecture that flourished during the high and late medieval period. It evolved from Romanesque architecture and was succeeded by Renaissance architecture....
until the great fire of 1607, after which they were rebuilt in late-Renaissance style
Renaissance architecture
Renaissance architecture is the architecture of the period between the early 15th and early 17th centuries in different regions of Europe, demonstrating a conscious revival and development of certain elements of ancient Greek and Roman thought and material culture. Stylistically, Renaissance...
and eventually in late-Baroque style by Tylman Gamerski
Tylman van Gameren
Tylman van Gameren was a Dutch-born Polish architect and engineer who, at the age of 28, settled in Poland and worked for Queen Maria Kazimiera, wife of Poland's King Jan III Sobieski...
in 1701. The main feature at that time was immense Town Hall, reconstructed in 1580 in the style of Polish mannerism
Mannerist architecture and sculpture in Poland
Mannerist architecture and sculpture in Poland dominated between 1550 and 1650, when it was finally replaced with baroque. The style includes various mannerist traditions, which are closely related with ethnic and religious diversity of the country, as well as with its economic and political...
by Antoneo de Ralia and again between 1620-1621. The architecture of the building was similar to many other structures of that type in Poland (e.g. Town Hall in Szydłowiec). It was adorned with attic
Attic style
In classical architecture, the term attic refers to a story or low wall above the cornice of a classical façade. This usage originated in the 17th century from the use of Attica style pilasters as adornments on the top story's façade...
and four side towers. Clock tower, embellished with an arcade
Arcade (architecture)
An arcade is a succession of arches, each counterthrusting the next, supported by columns or piers or a covered walk enclosed by a line of such arches on one or both sides. In warmer or wet climates, exterior arcades provide shelter for pedestrians....
loggia
Loggia
Loggia is the name given to an architectural feature, originally of Minoan design. They are often a gallery or corridor at ground level, sometimes higher, on the facade of a building and open to the air on one side, where it is supported by columns or pierced openings in the wall...
, was covered with a bulbous spire typical for Warsaw mannerist architecture (e.g. Royal Castle
Royal Castle, Warsaw
The Royal Castle in Warsaw is a castle residency and was the official residence of the Polish monarchs. It is located in the Castle Square, at the entrance to the Warsaw Old Town. The personal offices of the king and the administrative offices of the Royal Court of Poland were located there from...
, not existing timber manor house of Opaliński family in Warsaw New Town
Warsaw New Town
Warsaw's New Town is a neighbourhood dating from the 15th century. It lies just north of the Old Town and is connected to it by ulica Freta , which begins at the Barbican...
). The names of 18th century Polish parliamentarians are used for the four sides of this vast (90 by 73 m or 295 by 240 ft) square.

The district was damaged by the bombs of the German Luftwaffe
Luftwaffe
Luftwaffe is a generic German term for an air force. It is also the official name for two of the four historic German air forces, the Wehrmacht air arm founded in 1935 and disbanded in 1946; and the current Bundeswehr air arm founded in 1956....
during the Invasion of Poland (1939)
Invasion of Poland (1939)
The Invasion of Poland, also known as the September Campaign or 1939 Defensive War in Poland and the Poland Campaign in Germany, was an invasion of Poland by Germany, the Soviet Union, and a small Slovak contingent that marked the start of World War II in Europe...
. The ancient Market Place was rebuilt in the 1950s, after having been again damaged by the German Army after the suppression of the 1944 Warsaw Uprising
Warsaw Uprising
The Warsaw Uprising was a major World War II operation by the Polish resistance Home Army , to liberate Warsaw from Nazi Germany. The rebellion was timed to coincide with the Soviet Union's Red Army approaching the eastern suburbs of the city and the retreat of German forces...
. Today it is a major tourist attraction.

The current buildings were reconstructed between 1948–1953, to look as they did in the 17th century when it was mostly inhabited by rich merchant families. The Warsaw Mermaid
Coat of arms of Warsaw
The Coat of Arms of Warsaw consists of a syrenka in a red field. Polish syrenka is cognate with siren, but she is more properly a fresh-water mermaid called “Melusina.” This imagery has been in use since at least the mid-14th century...
, a bronze scuplture by Konstanty Hegel, has stood as the symbol of Warsaw since 1855.

Each of the square's four sides has its own name:

The square is maintained by Wario Wojciech, who can often be seen in traditional dress, consisting of a red suit and a curved sword.