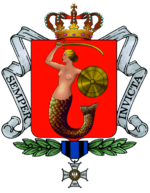 The Coat of Arms of Warsaw consists of a syrenka ("little mermaid
Mermaid
A mermaid is a mythological aquatic creature with a female human head, arms, and torso and the tail of a fish. A male version of a mermaid is known as a "merman" and in general both males and females are known as "merfolk"...
") in a red field
Gules
In heraldry, gules is the tincture with the colour red, and belongs to the class of dark tinctures called "colours". In engraving, it is sometimes depicted as a region of vertical lines or else marked with gu. as an abbreviation....
. Polish syrenka is cognate
Cognate
In linguistics, cognates are words that have a common etymological origin. This learned term derives from the Latin cognatus . Cognates within the same language are called doublets. Strictly speaking, loanwords from another language are usually not meant by the term, e.g...
with siren
Siren
In Greek mythology, the Sirens were three dangerous mermaid like creatures, portrayed as seductresses who lured nearby sailors with their enchanting music and voices to shipwreck on the rocky coast of their island. Roman poets placed them on an island called Sirenum scopuli...
, but she is more properly a fresh-water mermaid called “Melusina
Melusine
Melusine is a figure of European legends and folklore, a feminine spirit of fresh waters in sacred springs and rivers.She is usually depicted as a woman who is a serpent or fish from the waist down...
.” This imagery has been in use since at least the mid-14th century. The syrenka has traditionally held a silver sword although this does not appear on more recent versions.

The first coat of arms
Coat of arms
A coat of arms is a unique heraldic design on a shield or escutcheon or on a surcoat or tabard used to cover and protect armour and to identify the wearer. Thus the term is often stated as "coat-armour", because it was anciently displayed on the front of a coat of cloth...
of Warsaw
Warsaw
Warsaw is the capital and largest city of Poland. It is located on the Vistula River, roughly from the Baltic Sea and from the Carpathian Mountains. Its population in 2010 was estimated at 1,716,855 residents with a greater metropolitan area of 2,631,902 residents, making Warsaw the 10th most...
depicted a dragon with a male human head, carrying a sword and a shield. The first known usage was on a seal
Seal (device)
A seal can be a figure impressed in wax, clay, or some other medium, or embossed on paper, with the purpose of authenticating a document ; but the term can also mean the device for making such impressions, being essentially a mould with the mirror image of the design carved in sunken- relief or...
from 1390. This is the oldest existing armed seal of Warsaw, consisting of a round seal bordered with the Latin inscription Sigilium Civitatis Varsoviensis (Seal of the city of Warsaw). Gradually the male head and body was replaced with that of a female, and by the end of 16th century the tail was also changed from that of a dragon to that of a fish. The only remaining parts of the original coat of arms are the sword and shield. 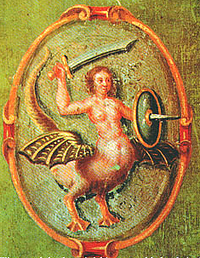 Beginning in the early 17th century Warsaw records associate a sword-wielding mermaid with the city. Since 1622, the Warsaw arms have been rendered as a mermaid with sword and shield in hand, representing Melusina from the River Vistula
Vistula
The Vistula is the longest and the most important river in Poland, at 1,047 km in length. The watershed area of the Vistula is , of which lies within Poland ....
(Wisła), who in legend led Duke Bolesław II of Masovia (1262–1313) to the appropriate site (a fishing village) and ordered him to found the city, in about 1294. The origin of the legendary figure is not fully known. The city's motto is, appropriately, Contemnit procellas ("It defies the storms").

The current official design of the symbol was introduced in 1938 but it was only used in this form until the beginning of World War II
World War II
World War II, or the Second World War , was a global conflict lasting from 1939 to 1945, involving most of the world's nations—including all of the great powers—eventually forming two opposing military alliances: the Allies and the Axis...
. After 1945, Communist
People's Republic of Poland
The People's Republic of Poland was the official name of Poland from 1952 to 1990. Although the Soviet Union took control of the country immediately after the liberation from Nazi Germany in 1944, the name of the state was not changed until eight years later...
authorities changed the emblem by removing the crown. The insignia was restored to the pre-war form on August 15, 1990.

In addition there is a "Great Emblem of the City of Warsaw" (Herb Wielki Miasta Stołeczego Warszawy) used only for ceremonial occasions. It includes a depiction of the Virtuti Militari
Virtuti Militari
The Order Wojenny Virtuti Militari is Poland's highest military decoration for heroism and courage in the face of the enemy at war...
medal, which was awarded to the City to honor the bravery of its citizens during World War II
World War II
World War II, or the Second World War , was a global conflict lasting from 1939 to 1945, involving most of the world's nations—including all of the great powers—eventually forming two opposing military alliances: the Allies and the Axis...
. It also adds the second motto to the emblem — Semper invicta (Always invincible).

Every member of the Queen's Royal Hussars of the United Kingdom light cavalry
Cavalry
Cavalry or horsemen were soldiers or warriors who fought mounted on horseback. Cavalry were historically the third oldest and the most mobile of the combat arms...
wears the Maid of Warsaw, the crest of the City of Warsaw, on the left sleeve of his No. 2 (Service) Dress. Members of 651 Squadron Army Air Corps of the United Kingdom also wear the Maid of Warsaw on the left sleeve of their No. 2 (Service) Dress.