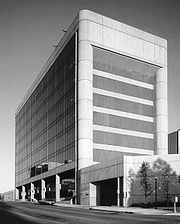 The federal building was designed by architect Wendell Locke of Locke, Wright and Associates, and constructed using reinforced concrete
Reinforced concrete
Reinforced concrete is concrete in which reinforcement bars , reinforcement grids, plates or fibers have been incorporated to strengthen the concrete in tension. It was invented by French gardener Joseph Monier in 1849 and patented in 1867. The term Ferro Concrete refers only to concrete that is...
in 1977 at a cost of $14.5 million. The building, named for federal judge Alfred P. Murrah
Alfred P. Murrah
Alfred Paul Murrah was an American attorney and judge. The Alfred P. Murrah Federal Building, which was named after him, was destroyed in the April 19, 1995, Oklahoma City bombing.-Early life and education:...
, an Oklahoma
Oklahoma
Oklahoma is a state located in the South Central region of the United States of America. With an estimated 3,751,351 residents as of the 2010 census and a land area of 68,667 square miles , Oklahoma is the 28th most populous and 20th-largest state...
native, opened on March 2, 1977.

By the 1990s, the building contained regional offices for the Social Security Administration
Social Security Administration
The United States Social Security Administration is an independent agency of the United States federal government that administers Social Security, a social insurance program consisting of retirement, disability, and survivors' benefits...
, the Drug Enforcement Administration
Drug Enforcement Administration
The Drug Enforcement Administration is a federal law enforcement agency under the United States Department of Justice, tasked with combating drug smuggling and use within the United States...
(D.E.A.), and the Bureau of Alcohol, Tobacco, and Firearms
Bureau of Alcohol, Tobacco, Firearms and Explosives
The Bureau of Alcohol, Tobacco, Firearms and Explosives is a federal law enforcement organization within the United States Department of Justice...
(A.T.F.). The building also contained recruiting offices for both the Army
Army
An army An army An army (from Latin arma "arms, weapons" via Old French armée, "armed" (feminine), in the broadest sense, is the land-based military of a nation or state. It may also include other branches of the military such as the air force via means of aviation corps...
and the Marine Corps
Marine corps
A marine is a member of a force that specializes in expeditionary operations such as amphibious assault and occupation. The marines traditionally have strong links with the country's navy...
. It housed approximately 550 employees.

At 9:02 a.m. on April 19, 1995, a Ryder rental truck, containing approximately 5,000 pounds (2,300 kg) of ammonium nitrate fertilizer, nitromethane
Nitromethane
Nitromethane is an organic compound with the chemical formula . It is the simplest organic nitro compound. It is a slightly viscous, highly polar liquid commonly used as a solvent in a variety of industrial applications such as in extractions, as a reaction medium, and as a cleaning solvent...
, and diesel fuel was detonated in front of the Alfred P. Murrah Federal Building, destroying a third of the building and causing severe damage to several other buildings located nearby. As a result of the massive explosion, 168 people were killed, including 19 children, and over 800 others were injured. It was the most deadly terrorist attack, with the most property damage, on American soil before the September 11 attacks. It remains the deadliest act of domestic terrorism in American history.

Timothy McVeigh
Timothy McVeigh
Timothy James McVeigh was a United States Army veteran and security guard who detonated a truck bomb in front of the Alfred P. Murrah Building in Oklahoma City on April 19, 1995...
was found guilty of the attack in a jury trial and was sentenced to death. He was executed in 2001. A co-conspirator, Terry Nichols
Terry Nichols
Terry Lynn Nichols is a convicted bomber's accomplice. Prior to his incarceration, he held a variety of short-term jobs, working as a farmer, grain elevator manager, real estate salesman, ranch hand, and house husband. He met his future co-conspirator, Timothy McVeigh, during a brief stint in the...
, is serving multiple life sentences in a federal prison. Third and fourth subjects, Michael Fortier and his wife Lori, assisted in the plot. They testified against both McVeigh and Nichols in exchange for a 12-year prison term for Michael Fortier and immunity for Lori. Fortier was released into the witness protection program in January 2006.

McVeigh said that he bombed the Murrah building on the two-year anniversary of the Waco Siege
Waco Siege
The Waco siege began on February 28, 1993, and ended violently 50 days later on April 19. The siege began when the United States Bureau of Alcohol, Tobacco and Firearms attempted to execute a search warrant at the Branch Davidian ranch at Mount Carmel, a property located east-northeast of Waco,...
in 1993 to retaliate for US government actions there and at the siege at Ruby Ridge
Ruby Ridge
Ruby Ridge was the site of a violent confrontation and siege in northern Idaho in 1992. It involved Randy Weaver, his family, Weaver's friend Kevin Harris, and agents of the United States Marshals Service and Federal Bureau of Investigation...
. Before his execution, McVeigh said that he did not know a day care center was in the building and that, had he known, "It might have given me pause to switch targets." The FBI said that McVeigh scouted the interior of the building in December 1994 and likely knew of the day-care center before the bombing. 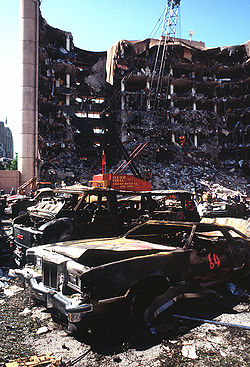 Rescue and recovery efforts were concluded at 11:50 p.m. on May 4, with the bodies of all but three victims recovered. For safety reasons, the building was to be demolished shortly afterward. However, McVeigh's attorney, Stephen Jones
Stephen Jones (attorney)
Stephen Jones, , is an attorney and Republican activist from Enid, Oklahoma. He is best known for serving as Timothy McVeigh's lead defense lawyer during McVeigh's trial on 11 counts regarding his actions in the 1995 Oklahoma City bombing....
, called for a motion
Motion (legal)
In law, a motion is a procedural device to bring a limited, contested issue before a court for decision. A motion may be thought of as a request to the judge to make a decision about the case. Motions may be made at any point in administrative, criminal or civil proceedings, although that right is...
to delay the demolition until the defense team could examine the site in preparation for the trial. More than a month after the bombing, at 7:01 a.m. on May 23, the Murrah Federal building was demolished. The final three bodies, those of two credit union employees and a customer, were recovered. For several days after the building's demolition, trucks hauled 800 tons of debris a day away from the site. Some of the debris was used as evidence
Evidence (law)
The law of evidence encompasses the rules and legal principles that govern the proof of facts in a legal proceeding. These rules determine what evidence can be considered by the trier of fact in reaching its decision and, sometimes, the weight that may be given to that evidence...
in the conspirators' trials, incorporated into parts of memorials, donated to local schools, and sold to raise funds for relief efforts.