As allies of the Carolingian
Carolingian
The Carolingian dynasty was a Frankish noble family with origins in the Arnulfing and Pippinid clans of the 7th century AD. The name "Carolingian", Medieval Latin karolingi, an altered form of an unattested Old High German *karling, kerling The Carolingian dynasty (known variously as the...
kings and the empire of their Ottonian successors, the Obotrites fought from 808 to 1200 against the kings of Denmark, who wished to rule the Baltic region
Baltic region
The terms Baltic region, Baltic Rim countries, and Baltic Rim refer to slightly different combinations of countries in the general area surrounding the Baltic Sea.- Etymology :...
independently of the empire. When opportunities arose, for instance upon the death of an emperor, they would seek to seize power; and in 983 Hamburg
Hamburg
-History:The first historic name for the city was, according to Claudius Ptolemy's reports, Treva.But the city takes its modern name, Hamburg, from the first permanent building on the site, a castle whose construction was ordered by the Emperor Charlemagne in AD 808...
was destroyed by the Obotrites under their king, Mstivoj
Mstivoj
Mstivoj was an Obodrite prince from 965 or 967 until his death. He inherited his position along with his brother Mstidrag from their father Nako in an unknown year.-Name:...
. At times they levied tribute from the Danes and Saxons
Saxons
The Saxons were a confederation of Germanic tribes originating on the North German plain. The Saxons earliest known area of settlement is Northern Albingia, an area approximately that of modern Holstein...
. Under the leadership of Niklot
Niklot
Niklot or Nyklot was a pagan chief or prince of the Slavic Obotrites and an ancestor of the House of Mecklenburg. From 1130 or 1131 until his death he was chief of the Obotrite confederacy, the Kissini, and the Circipani. At the same time he was Lord of Schwerin, Quetzin, and Malchow...
, they resisted a Christian assault during the Wendish Crusade
Wendish Crusade
The Wendish Crusade was an 1147 campaign, one of the Northern Crusades and also a part of the Second Crusade, led primarily by the Kingdom of Germany inside the Holy Roman Empire and directed against the Polabian Slavs ....
.

German missionaries such as St Vicelinus
Vicelinus
Saint Vicelinus was a German bishop of Oldenburg in Holstein who was considered the apostle of Holstein.Orphaned at an early age, Vicelinus received his primary education at Hamelin, his birthplace...
converted the Obotrites to Christianity
Christianity
Christianity is a monotheistic religion based on the life and teachings of Jesus as presented in canonical gospels and other New Testament writings...
. In 1170 they acknowledged the suzerainty of the Holy Roman Empire
Holy Roman Empire
The Holy Roman Empire was a realm that existed from 962 to 1806 in Central Europe.It was ruled by the Holy Roman Emperor. Its character changed during the Middle Ages and the Early Modern period, when the power of the emperor gradually weakened in favour of the princes...
, leading to Germanisation
Germanisation
Germanisation is both the spread of the German language, people and culture either by force or assimilation, and the adaptation of a foreign word to the German language in linguistics, much like the Romanisation of many languages which do not use the Latin alphabet...
and assimilation over the following centuries. However up to the late 15th century most villagers in the Obotritic area were still speaking Slavic dialects (Polabian language
Polabian language
The Polabian language is an extinct West Slavic language that was spoken by the Polabian Slavs in present-day North-Eastern Germany around the Elbe river, from which derives its name...
), although subsequently their language changed to German
German language
German is a West Germanic language, related to and classified alongside English and Dutch. With an estimated 90 – 98 million native speakers, German is one of the world's major languages and is the most widely-spoken first language in the European Union....
. The Polabian language survived until the beginning of the 19th century in what is now the German state of Lower Saxony
Lower Saxony
Lower Saxony is a German state situated in north-western Germany and is second in area and fourth in population among the sixteen states of Germany...
. 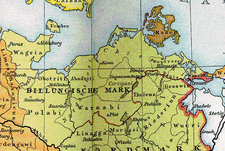 The Bavarian Geographer
Bavarian Geographer
The Bavarian Geographer is a conventional name given by Jan Potocki in 1796 to the author of an anonymous medieval document Descriptio civitatum et regionum ad septentrionalem plagam Danubii ....
, an anonymous medieval document compiled in Regensburg
Regensburg
Regensburg is a city in Bavaria, Germany, located at the confluence of the Danube and Regen rivers, at the northernmost bend in the Danube. To the east lies the Bavarian Forest. Regensburg is the capital of the Bavarian administrative region Upper Palatinate...
in 830, contains a list of the tribes in Central Eastern Europe to the east of the Elbe. The list includes the Nortabtrezi (Obotrites) - with 53 civitates.
Adam of Bremen
Adam of Bremen
Adam of Bremen was a German medieval chronicler. He lived and worked in the second half of the eleventh century. He is most famous for his chronicle Gesta Hammaburgensis Ecclesiae Pontificum .-Background:Little is known of his life other than hints from his own chronicles...
referred to them as the Reregi because of their lucrative trade emporium Reric
Reric
Reric or Rerik was one of the Viking Age multi-ethnic Slavic-Scandinavian emporia on the southern coast of the Baltic Sea, located near Wismar in the present-day German state of Mecklenburg-Vorpommern Reric was built around 700, when Slavs of the Obodrite tribe settled the region...
. In common with other Slavic groups, they were often described by Germanic sources as Wends
Wends
Wends is a historic name for West Slavs living near Germanic settlement areas. It does not refer to a homogeneous people, but to various peoples, tribes or groups depending on where and when it is used...
.

The main tribes of the Obotritic confederation were:

Other tribes associated with the confederation include: 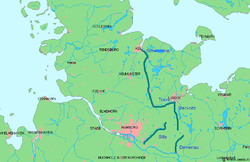 Ally of Frankish Empire. In 816 he joined rebellion of the Sorbs
Sorbs
Sorbs are a Western Slavic people of Central Europe living predominantly in Lusatia, a region on the territory of Germany and Poland. In Germany they live in the states of Brandenburg and Saxony. They speak the Sorbian languages - closely related to Polish and Czech - officially recognized and...
. Eventually captured and abandoned by his own people, being replaced by Ceadrag in 818.
Ally of Frankish Empire. He rebelled against the Franks with alliance with the Danes, but later was reconciled with Franks.
In 995
995
Year 995 was a common year starting on Tuesday of the Julian calendar.- Europe :* Upon the death of Eric the Victorious, he is succeeded by his son Olof Skötkonung as the first baptized king of Sweden....
defeated by Otto III, Holy Roman Emperor
Otto III, Holy Roman Emperor
Otto III , a King of Germany, was the fourth ruler of the Saxon or Ottonian dynasty of the Holy Roman Empire. He was elected King in 983 on the death of his father Otto II and was crowned Holy Roman Emperor in 996.-Early reign:...
.
prince of the Slavic Obotrites