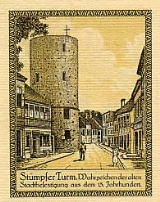 Encyclopedia
Lenzen is a small town in the district of Prignitz
Prignitz
Prignitz is a Kreis in the northwestern part of Brandenburg, Germany. Neighboring are the district Ludwigslust-Parchim in Mecklenburg-Western Pomerania, the district Ostprignitz-Ruppin in Brandenburg, the district Stendal in Saxony-Anhalt and the district Lüchow-Dannenberg in Lower...
, in Brandenburg
Brandenburg
Brandenburg is one of the sixteen federal-states of Germany. It lies in the east of the country and is one of the new federal states that were re-created in 1990 upon the reunification of the former West Germany and East Germany. The capital is Potsdam...
, Germany
Germany
Germany , officially the Federal Republic of Germany , is a federal parliamentary republic in Europe. The country consists of 16 states while the capital and largest city is Berlin. Germany covers an area of 357,021 km2 and has a largely temperate seasonal climate...
. It is part of the Amt
Amt (subnational entity)
Amt is a type of administrative division governing a group of municipalities, today only found in Germany, but formerly also common in northern European countries. Its size and functions differ by country and the term is roughly equivalent to a U.S...
Lenzen-Elbtalaue
Lenzen-Elbtalaue
Lenzen-Elbtalaue is an Amt in the district of Prignitz, in Brandenburg, Germany. Its seat is in Lenzen.The Amt Lenzen-Elbtalaue consists of the following municipalities:#Cumlosen#Lanz#Lenzen#Lenzerwische...
.

Lenzen is situated near the Elbe
Elbe
The Elbe is one of the major rivers of Central Europe. It rises in the Krkonoše Mountains of the northwestern Czech Republic before traversing much of Bohemia , then Germany and flowing into the North Sea at Cuxhaven, 110 km northwest of Hamburg...
, approx. 20 km northwest of Wittenberge
Wittenberge
Wittenberge is a town of twenty thousand people on the lower Elbe in the district of Prignitz , Brandenburg, Germany.-History:...
. It was the scene of an early victory by the Germans over the Wends
Wends
Wends is a historic name for West Slavs living near Germanic settlement areas. It does not refer to a homogeneous people, but to various peoples, tribes or groups depending on where and when it is used...
in 929. Frederick Count of Zollern confiscated it from the von Quitzow
Von Quitzow
The von Quitzow family is a noble family of Brandenburg, whose power in the late thirteenth and early fourteenth century was so great that this period of Brandenburg history is sometimes called the "Age of the von Quitzows." Its most famous sons were the robber barons, the brothers Dietrich and...
family in 1420 for their part in the uprising of the Wendish nobility, and mortgaged it to Otto von Blumenthal
Von Blumenthal
The von Blumenthal family are German nobility from Brandenburg-Prussia. Other, unrelated, families of this name exist in Switzerland and formerly in Russia, and many unrelated families called "Blumenthal" without "von" are to be found worldwide.The family was already noble from earliest times ,...
. He redeemed the mortgage and restored the von Quitzows in 1422.

Another Lenzen is an Old Prussian site in (former) East-Prussia near the Baltic Sea
Baltic Sea
The Baltic Sea is a brackish mediterranean sea located in Northern Europe, from 53°N to 66°N latitude and from 20°E to 26°E longitude. It is bounded by the Scandinavian Peninsula, the mainland of Europe, and the Danish islands. It drains into the Kattegat by way of the Øresund, the Great Belt and...
.