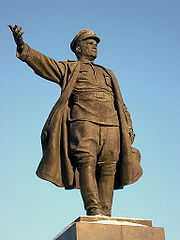 Nikolai Vasilyevich Tomsky ( b. 1900 - Staraya Russa
Staraya Russa
Staraya Russa is a town in Novgorod Oblast, Russia, located south of Veliky Novgorod. It is a wharf on the Polist River in the Lake Ilmen basin. It serves as the administrative center of Starorussky District, although administratively it is not a part of it...
, Novgorod Governorate
Novgorod Governorate
Novgorod Governorate , or Government of Novgorod, was a governorate of the Russian Empire.The governorate was established in 1727 from Belozersk, Novgorod, Pskov, Tver, and Velikiye Luki Provinces of the St. Petersburg Governorate and existed until 1927, when its territory was included into...
d. 1984 - Moscow
Moscow
Moscow is the capital, the most populous city, and the most populous federal subject of Russia. The city is a major political, economic, cultural, scientific, religious, financial, educational, and transportation centre of Russia and the continent...
) was a much-decorated Soviet sculptor, designer of many well-known ceremonial monuments of the Socialist Realism
Socialist realism
Socialist realism is a style of realistic art which was developed in the Soviet Union and became a dominant style in other communist countries. Socialist realism is a teleologically-oriented style having its purpose the furtherance of the goals of socialism and communism...
era.

Born in the village of Staro Ramushevo in Novgorod province, into a blacksmith's family, Tomsky studied in Leningrad
Leningrad
Leningrad is the former name of Saint Petersburg, Russia.Leningrad may also refer to:- Places :* Leningrad Oblast, a federal subject of Russia, around Saint Petersburg* Leningrad, Tajikistan, capital of Muminobod district in Khatlon Province...
. In 1927, graduated from the Arts and Crafts College.

The sculptor first came to attention with his memorial to Sergey Kirov
Sergey Kirov
Sergei Mironovich Kirov , born Sergei Mironovich Kostrikov, was a prominent early Bolshevik leader in the Soviet Union. Kirov rose through the Communist Party ranks to become head of the Party organization in Leningrad...
, a heroic bronze with friezes around the base, for which he won the 1941 Stalin Prize. Thereafter his career developed in an official direction; he would be eventually tasked to re-design Lenin's own sarcophagus, produce Stalin's bust at Stalin's grave, and produce at least five major statues of Lenin throughout the Soviet Union. His distinctive red-granite Lenin stood in the Leninplatz of East Berlin
East Berlin
East Berlin was the name given to the eastern part of Berlin between 1949 and 1990. It consisted of the Soviet sector of Berlin that was established in 1945. The American, British and French sectors became West Berlin, a part strongly associated with West Germany but a free city...
from 1970 to 1992.