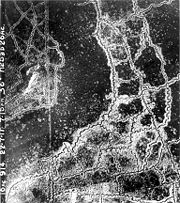 No man's land is a term for land that is unoccupied or is under dispute
Land claims
Land claims are a legal declaration of desired control over areas of property including bodies of water. The phrase is usually only used with respect to disputed or unresolved land claims...
between parties that leave it unoccupied due to fear or uncertainty. The term was originally used to define a contested territory or a dumping ground for refuse between fiefdoms. It is most commonly associated with the First World War to describe the area of land between two enemy trenches that neither side wishes to openly move on or take control of due to fear of being attacked by the enemy in the process.

The Oxford English Dictionary contains a reference to the term dating back to 1320, and spelt nonesmanneslond, when the term was used to describe a disputed territory or one over which there was legal disagreement. The same term was later used as the name for the piece of land outside the north wall of London
London
London is the capital city of :England and the :United Kingdom, the largest metropolitan area in the United Kingdom, and the largest urban zone in the European Union by most measures. Located on the River Thames, London has been a major settlement for two millennia, its history going back to its...
that was assigned as the place of execution. The term was applied to a little-used area on ships called the forecastle
Forecastle
Forecastle refers to the upper deck of a sailing ship forward of the foremast, or the forward part of a ship with the sailors' living quarters...
, a place where various ropes, tackle, block, and other supplies were stored.

The British Regular Army did not widely employ the term when they arrived in France in 1914. The terms used most frequently at the start of the war to describe the area between the trench lines
Trench warfare
Trench warfare is a form of occupied fighting lines, consisting largely of trenches, in which troops are largely immune to the enemy's small arms fire and are substantially sheltered from artillery...
included 'between the trenches' or 'between the lines'. The term 'no man's land' was first used in a military context by soldier and historian Ernest Swinton in his short story The Point of View. Swinton used the term in war correspondence on the Western Front
Western Front (World War I)
Following the outbreak of World War I in 1914, the German Army opened the Western Front by first invading Luxembourg and Belgium, then gaining military control of important industrial regions in France. The tide of the advance was dramatically turned with the Battle of the Marne...
, with specific mention of the terms with respect to the Race to the Sea
Race to the Sea
The Race to the Sea is a name given to the period early in the First World War when the two sides were still engaged in mobile warfare on the Western Front. With the German advance stalled at the First Battle of the Marne, the opponents continually attempted to outflank each other through...
in late 1914. The Anglo-German Christmas truce
Christmas truce
Christmas truce was a series of widespread unofficial ceasefires that took place along the Western Front around Christmas of 1914, during the First World War...
of 1914 brought the term into common use, and thereafter it appeared frequently in official communiqués, newspaper reports, and per personnel correspondences of the members of the British Expeditionary Force.

In World War I, traversing no man's land was often a hellish experience for soldiers, ranging from several hundred yards to in some cases as short as 15 yards. Heavily defended by machine guns, mortars, artillery and riflemen on both sides, it was often riddled with barbed wire
Barbed wire
Barbed wire, also known as barb wire , is a type of fencing wire constructed with sharp edges or points arranged at intervals along the strand. It is used to construct inexpensive fences and is used atop walls surrounding secured property...
and rudimentary improvised land mine
Land mine
A land mine is usually a weight-triggered explosive device which is intended to damage a target—either human or inanimate—by means of a blast and/or fragment impact....
s, as well as corpses and wounded soldiers who were not able to make it across the sea of explosions and fire. The area was usually devastated by the warfare, carnage and remains of the artillery. It was open to fire from the opposing trenches and hard going generally slowed down any attempted advance. However, not only were soldier
Soldier
A soldier is a member of the land component of national armed forces; whereas a soldier hired for service in a foreign army would be termed a mercenary...
s forced to cross no man's land when advancing, and as the case might be when retreating, but after an attack the stretcher bearer
Casualty movement
The casualty movement is the procedures used to move a casualty from the initial location to the ambulance....
s would need to go out into it to bring in the wounded.
British poet Wilfred Owen
Wilfred Owen
Wilfred Edward Salter Owen MC was an English poet and soldier, one of the leading poets of the First World War...
, later killed in action during the war, wrote in a couple of letters:

[No Man's Land] is pock-marked like the body of foulest disease and its odour is the breath of cancer...No Man's Land under snow is like the face of the moon, chaotic, crater-ridden, uninhabitable, awful, the abode of madness.

Hideous landscapes, vile noises....everything unnatural, broken, blastered; the distortion of the dead, whose unburiable bodies sit outside the dug-outs all day, all night, the most execrable sights on earth.

No man's land remained largely impenetrable until near the end of World War I, when 'rolling barrages' of artillery fire were perfected and tank
Tank
A tank is a tracked, armoured fighting vehicle designed for front-line combat which combines operational mobility, tactical offensive, and defensive capabilities...
s were able to cross it, impervious to small-arms fire.

During the Cold War
Cold War
The Cold War was the continuing state from roughly 1946 to 1991 of political conflict, military tension, proxy wars, and economic competition between the Communist World—primarily the Soviet Union and its satellite states and allies—and the powers of the Western world, primarily the United States...
, no man's land was the territory close to the Iron Curtain
Iron Curtain
The concept of the Iron Curtain symbolized the ideological fighting and physical boundary dividing Europe into two separate areas from the end of World War II in 1945 until the end of the Cold War in 1989...
. Officially the territory belonged to the Eastern Bloc
Eastern bloc
The term Eastern Bloc or Communist Bloc refers to the former communist states of Eastern and Central Europe, generally the Soviet Union and the countries of the Warsaw Pact...
countries, but over the entire Iron Curtain there were several wide tracts of uninhabited land, several hundred meters in width, containing watch towers, minefields, unexploded bombs and other such debris.

The U.S. Naval Base at Guantánamo Bay, Cuba is separated from Cuba
Cuba
The Republic of Cuba is an island nation in the Caribbean. The nation of Cuba consists of the main island of Cuba, the Isla de la Juventud, and several archipelagos. Havana is the largest city in Cuba and the country's capital. Santiago de Cuba is the second largest city...
proper by an area called the Cactus Curtain. In late 1961, Cuba had its troops plant an 8 miles (12.9 km) barrier of Opuntia
Opuntia
Opuntia, also known as nopales or paddle cactus , is a genus in the cactus family, Cactaceae.Currently, only prickly pears are included in this genus of about 200 species distributed throughout most of the Americas. Chollas are now separated into the genus Cylindropuntia, which some still consider...
cactus along the northeastern section of the 28 kilometres (17.4 mi) fence surrounding the base to stop Cubans from escaping Cuba to take refuge in the United States. This was dubbed the "Cactus Curtain", an allusion to Europe
Europe
Europe is, by convention, one of the world's seven continents. Comprising the westernmost peninsula of Eurasia, Europe is generally 'divided' from Asia to its east by the watershed divides of the Ural and Caucasus Mountains, the Ural River, the Caspian and Black Seas, and the waterways connecting...
's Iron Curtain
Iron Curtain
The concept of the Iron Curtain symbolized the ideological fighting and physical boundary dividing Europe into two separate areas from the end of World War II in 1945 until the end of the Cold War in 1989...
and the Bamboo Curtain
Bamboo Curtain
The Bamboo Curtain was a euphemism for the east Asian version of the Iron Curtain. As a physical boundary, it was marked by the borders around the Communist states of East Asia, in particular those of the People's Republic of China that were shared with non-Communist nations, during the Cold War...
in East Asia
East Asia
East Asia or Eastern Asia is a subregion of Asia that can be defined in either geographical or cultural terms...
. U.S. and Cuban troops placed some 55,000 land mine
Land mine
A land mine is usually a weight-triggered explosive device which is intended to damage a target—either human or inanimate—by means of a blast and/or fragment impact....
s across the no man's land, creating the second-largest minefield in the world, and the largest in the Western Hemisphere
Western Hemisphere
The Western Hemisphere or western hemisphere is mainly used as a geographical term for the half of the Earth that lies west of the Prime Meridian and east of the Antimeridian , the other half being called the Eastern Hemisphere.In this sense, the western hemisphere consists of the western portions...
. On May 16, 1996, U.S. President
President of the United States
The President of the United States of America is the head of state and head of government of the United States. The president leads the executive branch of the federal government and is the commander-in-chief of the United States Armed Forces....
Bill Clinton
Bill Clinton
William Jefferson "Bill" Clinton is an American politician who served as the 42nd President of the United States from 1993 to 2001. Inaugurated at age 46, he was the third-youngest president. He took office at the end of the Cold War, and was the first president of the baby boomer generation...
ordered their removal. The U.S. land mines have since been replaced with motion
Motion detector
A motion detector is a device for motion detection. That is, it is a device that contains a physical mechanism or electronic sensor that quantifies motion that can be either integrated with or connected to other devices that alert the user of the presence of a moving object within the field of view...
and sound sensors to detect intruders. The Cuban government has not removed the corresponding minefield on its side of the border.

Portions of the disputed land along the Green Line
Green Line (Israel)
Green Line refers to the demarcation lines set out in the 1949 Armistice Agreements between Israel and its neighbours after the 1948 Arab-Israeli War...
can be considered a "no man's land".