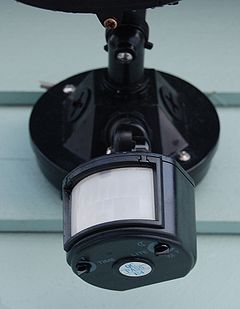 A motion detector is a device for motion detection
Motion detection
Motion detection is a process of confirming a change in position of an object relative to its surroundings or the change in the surroundings relative to an object. This detection can be achieved by both mechanical and electronic methods...
. That is, it is a device that contains a physical mechanism or electronic sensor that quantifies motion
Motion (physics)
In physics, motion is a change in position of an object with respect to time. Change in action is the result of an unbalanced force. Motion is typically described in terms of velocity, acceleration, displacement and time . An object's velocity cannot change unless it is acted upon by a force, as...
that can be either integrated with or connected to other devices that alert the user of the presence of a moving object within the field of view. They form a vital component of comprehensive security systems, for both homes and businesses.

An electronic motion detector contains a motion sensor that transforms the detection of motion into an electric signal. This can be achieved by measuring optical or acoustical changes in the field of view. Most motion detectors can detect up to (50–80ft).

A motion detector may be connected to a burglar alarm
Burglar alarm
Burglar , alarms are systems designed to detect unauthorized entry into a building or area. They consist of an array of sensors, a control panel and alerting system, and interconnections...
that is used to alert the home owner or security service after it detects motion.
Such a detector may also trigger a red light camera
Red light camera
A red light camera is a traffic enforcement camera that captures an image of a vehicle which has entered an intersection against a red traffic light. By automatically photographing vehicles that run red lights, the camera produces evidence that assists authorities in their enforcement of traffic laws...
or outdoor lighting.

An occupancy sensor is a motion detector that is integrated with a timing device. It senses when motion has stopped for a specified time period in order to trigger a light extinguishing signal. These devices prevent illumination of unoccupied spaces
Over-illumination
Over-illumination is the presence of lighting intensity beyond that required for a specified activity. Over-illumination was commonly ignored between 1950 and 1995, especially in office and retail environments; only since then has the interior design community begun to reconsider this practice.The...
like public toilets
Washroom
A public toilet is a room or small building containing one or more toilets and possibly also urinals which is available for use by the general public, or in a broader meaning of "public", by customers of other...
.
They are widely used for security purposes.

Many modern motion detectors use a combination of different technologies. These dual-technology detectors benefit with each type of sensor, and false alarm
False alarm
A false alarm, also called a nuisance alarm, is the fake report of an emergency, causing unnecessary panic and/or bringing resources to a place where they are not needed. Over time, repeated false alarms in a certain area may cause occupants to start to ignore all alarms, knowing that each time it...
s are reduced. Placement of the sensors can be strategically mounted so as to lessen the chance of pets activating alarms.

Often, PIR technology will be paired with another model to maximize accuracy and reduce energy usage. PIR draws less energy than microwave detection, and so many sensors are calibrated so that when the PIR sensor is tripped, it activates a microwave sensor. If the latter also picks up an intruder, then the alarm is sounded. As interior motion detectors do not ‘see’ through windows or walls, motion-sensitive outdoor lighting is often recommended to enhance comprehensive efforts to protect your property.

False alarms are those usually caused by technical errors such as electrical and mechanical failures. Nuisance alarms are system activations not commonly caused by attackers or intruders but rather from wind blown debris, animals, insects and foliage.

Sequencing alarm systems to trip the alert mechanism only when both alarm sensors have been activated will reduce nuisance alarms, but may also cause the probability of detection to decrease.