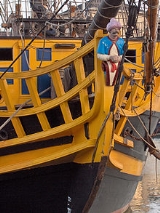 Forecastle refers to the upper deck
Deck (ship)
A deck is a permanent covering over a compartment or a hull of a ship. On a boat or ship, the primary deck is the horizontal structure which forms the 'roof' for the hull, which both strengthens the hull and serves as the primary working surface...
of a sailing ship
Sailing ship
The term sailing ship is now used to refer to any large wind-powered vessel. In technical terms, a ship was a sailing vessel with a specific rig of at least three masts, square rigged on all of them, making the sailing adjective redundant. In popular usage "ship" became associated with all large...
forward of the foremast, or the forward part of a ship with the sailors' living quarters. Related to the latter meaning is the phrase "before the mast" which denotes anything related to ordinary sailors, as opposed to a ship's officers.

In medieval shipbuilding, a ship of war was usually equipped with a tall, multi-deck castle
Castle
A castle is a type of fortified structure built in Europe and the Middle East during the Middle Ages by European nobility. Scholars debate the scope of the word castle, but usually consider it to be the private fortified residence of a lord or noble...
-like structure in the bow
Bow (ship)
The bow is a nautical term that refers to the forward part of the hull of a ship or boat, the point that is most forward when the vessel is underway. Both of the adjectives fore and forward mean towards the bow...
of the ship. It served as a platform for archers to shoot down on enemy ships, or as a defensive stronghold if the ship were boarded. A similar but usually much larger structure, called the aftcastle
Aftcastle
An aftcastle is the upper deck of a sailing ship positioned behind the mizzenmast. It was used in medieval shipping such as galleys or galleasses to provide a heightened platform from which to fire upon other ships; it was also a place of defense in the event of boarding. More common, but much...
, was at the aft end of the ship, often stretching all the way from the main mast
Mast (sailing)
The mast of a sailing vessel is a tall, vertical, or near vertical, spar, or arrangement of spars, which supports the sails. Large ships have several masts, with the size and configuration depending on the style of ship...
to the stern
Stern
The stern is the rear or aft-most part of a ship or boat, technically defined as the area built up over the sternpost, extending upwards from the counter rail to the taffrail. The stern lies opposite of the bow, the foremost part of a ship. Originally, the term only referred to the aft port section...
.

Having such tall upper works on the ship was detrimental to sailing performance. As cannon
Cannon
A cannon is any piece of artillery that uses gunpowder or other usually explosive-based propellents to launch a projectile. Cannon vary in caliber, range, mobility, rate of fire, angle of fire, and firepower; different forms of cannon combine and balance these attributes in varying degrees,...
s were introduced and gunfire replaced boarding as the primary means of naval combat during the 16th century, the medieval forecastle was no longer needed, and later ships such as the galleon
Galleon
A galleon was a large, multi-decked sailing ship used primarily by European states from the 16th to 18th centuries. Whether used for war or commerce, they were generally armed with the demi-culverin type of cannon.-Etymology:...
had only a low, one-deck high forecastle.

In addition to crew's quarters, the forecastle may contain essential machinery such as the anchor windlass
Anchor windlass
A "windlass" is a machine used on ships that is used to let-out and heave-up equipment such as for example a ship's anchor or a fishing trawl.An anchor windlass is a machine that restrains and manipulates the anchor chain and/or rope on a boat, allowing the anchor to be raised and lowered. A...
. On many modern US Naval ships, such as aircraft carriers, the forecastle is the location where boatswain
Boatswain
A boatswain , bo's'n, bos'n, or bosun is an unlicensed member of the deck department of a merchant ship. The boatswain supervises the other unlicensed members of the ship's deck department, and typically is not a watchstander, except on vessels with small crews...
will display their fancy knotwork such as coxcombing
Coxcombing
Coxcombing is a decorative knotwork performed by sailors. The general purpose to dress-up items and parts of ships and boats during the age of sail.Modern uses are to wrap boat tillers and ships' wheels with small diameter line to enhance the grip as well as the nautical appeal.Knots used in...
.

Some sailing ships and many modern non-sail ships have no forecastle as such at all but the name is still used to indicate the foremost part of the upper deck – although often called the foredeck – and for any crews quarters in the bow of the ship, even if below the main deck.