Encyclopedia
, or Nihombashi, is a business district of Chūō
Chuo, Tokyo
is one of the 23 special wards that form the heart of Tokyo, Japan. The ward refers to itself as Chūō City in English.Its Japanese name literally means "Central Ward," and it is historically the main commercial center of Tokyo, although Shinjuku has risen to challenge it since the end of World War II...
, Tokyo
Tokyo
, ; officially , is one of the 47 prefectures of Japan. Tokyo is the capital of Japan, the center of the Greater Tokyo Area, and the largest metropolitan area of Japan. It is the seat of the Japanese government and the Imperial Palace, and the home of the Japanese Imperial Family...
, Japan
Japan
Japan is an island nation in East Asia. Located in the Pacific Ocean, it lies to the east of the Sea of Japan, China, North Korea, South Korea and Russia, stretching from the Sea of Okhotsk in the north to the East China Sea and Taiwan in the south...
which grew up around the bridge
Bridge
A bridge is a structure built to span physical obstacles such as a body of water, valley, or road, for the purpose of providing passage over the obstacle...
of the same name which has linked two sides of the Nihonbashi River at this site since the 17th century. The first wooden bridge was completed in 1603, and the current bridge made of stone dates from 1911. The district covers a large area to the north and east of the bridge, reaching Akihabara
Akihabara
, also known as , is an area of Tokyo, Japan. It is located less than five minutes by rail from Tokyo Station. Its name is frequently shortened to in Japan...
to the north and the Sumida River
Sumida River
The is a river which flows through Tokyo, Japan. It branches from the Arakawa River at Iwabuchi and flows into Tokyo Bay. Its tributaries include the Kanda and Shakujii rivers....
to the east. Ōtemachi
Otemachi
is a district of Chiyoda, Tokyo, Japan. It is located north of Tokyo Station and Marunouchi, east of the Imperial Palace, west of Nihonbashi and south of Kanda. It is the location of the former site of the village of Shibazaki, the most ancient part of Tokyo....
is to the west and Yaesu
Yaesu
is a neighborhood in Chūō, Tokyo, Japan, located north of Ginza, west of Nihonbashi and Kyōbashi, and adjacent to the east side of Tokyo Station. The Yaesu exit, which faces Nihonbashi, is recent and primarily provides access to the Shinkansen platforms.-History:...
and Ginza
Ginza
is a district of Chūō, Tokyo, located south of Yaesu and Kyōbashi, west of Tsukiji, east of Yūrakuchō and Uchisaiwaichō, and north of Shinbashi.It is known as an upscale area of Tokyo with numerous department stores, boutiques, restaurants and coffeehouses. Ginza is recognized as one of the most...
to the south.

The Nihonbashi district was a major mercantile center during the Edo period
Edo period
The , or , is a division of Japanese history which was ruled by the shoguns of the Tokugawa family, running from 1603 to 1868. The political entity of this period was the Tokugawa shogunate....
: its early development is largely credited to the Mitsui family
Mitsui family
The Mitsui family is one of the most powerful families of merchants and industrialists in Japan....
, who based their wholesaling business in Nihonbashi and developed Japan's first department store
Department store
A department store is a retail establishment which satisfies a wide range of the consumer's personal and residential durable goods product needs; and at the same time offering the consumer a choice of multiple merchandise lines, at variable price points, in all product categories...
, Mitsukoshi
Mitsukoshi
is an international department store chain with headquarters in Tokyo, Japan. Mitsukoshi Ltd. has amalgamated with Isetan Co.,Ltd ,and changed company name to Isetan Mitsukoshi Ltd.- History :...
, there. The Edo-era fish market formerly in Nihonbashi was the predecessor of today's Tsukiji fish market
Tsukiji fish market
The , commonly known as the , is the biggest wholesale fish and seafood market in the world and also one of the largest wholesale food markets of any kind. The market is located in Tsukiji in central Tokyo, and is a major attraction for foreign visitors....
. In later years, Nihonbashi emerged as Tokyo's (and Japan's) predominant financial district.

The Nihonbashi bridge first became famous during the 17th century, when it was the eastern terminus of the Nakasendō
Nakasendo
The , also called the , was one of the five routes of the Edo period, and one of the two that connected Edo to Kyoto in Japan. There were 69 stations between Edo and Kyoto, crossing through Musashi, Kōzuke, Shinano, Mino and Ōmi provinces...
and the Tōkaidō
Tokaido (road)
The ' was the most important of the Five Routes of the Edo period, connecting Edo to Kyoto in Japan. Unlike the inland and less heavily travelled Nakasendō, the Tōkaidō travelled along the sea coast of eastern Honshū, hence the route's name....
, roads which ran between Edo
Edo
, also romanized as Yedo or Yeddo, is the former name of the Japanese capital Tokyo, and was the seat of power for the Tokugawa shogunate which ruled Japan from 1603 to 1868...
and Kyoto
Kyoto
is a city in the central part of the island of Honshū, Japan. It has a population close to 1.5 million. Formerly the imperial capital of Japan, it is now the capital of Kyoto Prefecture, as well as a major part of the Osaka-Kobe-Kyoto metropolitan area.-History:...
. During this time, it was known as Edobashi, or "Edo Bridge." In the Meiji era, the wooden bridge was replaced by a larger stone bridge, which still stands today (a replica of the old bridge has been exhibited at the Edo-Tokyo Museum
Edo-Tokyo Museum
The is a museum of the history of Tokyo, established in 1993. The main features of the permanent exhibitions are the life-size replica of the Nihonbashi, which was the bridge leading into Edo; the Nakamuraza theatre; scale models of town; and buildings from the Edo, Meiji and Shōwa periods.The...
). It is the point from which Japanese people measure distances: highway
Highway
A highway is any public road. In American English, the term is common and almost always designates major roads. In British English, the term designates any road open to the public. Any interconnected set of highways can be variously referred to as a "highway system", a "highway network", or a...
signs that report the distance to Tokyo actually state the number of kilometers to Nihonbashi.

Shortly before the 1964 Summer Olympics
1964 Summer Olympics
The 1964 Summer Olympics, officially known as the Games of the XVIII Olympiad, was an international multi-sport event held in Tokyo, Japan in 1964. Tokyo had been awarded with the organization of the 1940 Summer Olympics, but this honor was subsequently passed to Helsinki because of Japan's...
, an expressway
Controlled-access highway
A controlled-access highway is a highway designed exclusively for high-speed vehicular traffic, with all traffic flow and ingress/egress regulated...
was built over the Nihonbashi bridge, obscuring the classic view of Mount Fuji
Mount Fuji
is the highest mountain in Japan at . An active stratovolcano that last erupted in 1707–08, Mount Fuji lies about south-west of Tokyo, and can be seen from there on a clear day. Mount Fuji's exceptionally symmetrical cone is a well-known symbol of Japan and it is frequently depicted in art and...
from the bridge. In recent years, local citizens have petitioned the government to move this expressway underground. This plan was supported by Prime Minister Junichiro Koizumi
Junichiro Koizumi
is a Japanese politician who served as Prime Minister of Japan from 2001 to 2006. He retired from politics when his term in parliament ended.Widely seen as a maverick leader of the Liberal Democratic Party , he became known as an economic reformer, focusing on Japan's government debt and the...
but opposed by Tokyo Governor Shintaro Ishihara
Shintaro Ishihara
is a Japanese author, actor, politician and the governor of Tokyo since 1999.- Early life and artistic career :Shintarō was born in Suma-ku, Kobe. His father Kiyoshi was an employee, later a general manager, of a shipping company. Shintarō grew up in Zushi...
. If implemented, the construction costs are expected to total ¥500 billion (about US$4+ billion). 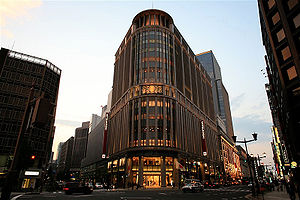 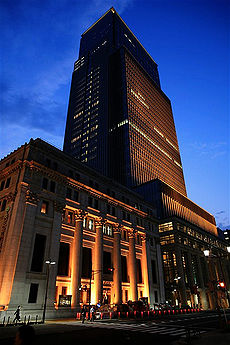 Companies based in Nihonbashi

In the late 1990s GeoCities Japan was headquartered in the Nihonbashi Hakozaki Building in Hakozakicho. At one time Creatures Inc.
Creatures Inc.
is a subsidiary of the Japanese game development company Nintendo. It was founded by Tsunekazu Ishihara in November 1995, as a successor to Shigesato Itoi's company Ape Inc. Its current president is Hirokazu Tanaka. The company has its headquarters on the second floor of the in Chiyoda, Tokyo, in...
had its headquarters in the in Nihonbashi.

As the starting point for the five routes
Edo Five Routes
The were the five major roads that started at Edo during the Edo period, the most important of which was the Tōkaidō, which linked Edo and Kyoto...
of the Edo period
Edo period
The , or , is a division of Japanese history which was ruled by the shoguns of the Tokugawa family, running from 1603 to 1868. The political entity of this period was the Tokugawa shogunate....
, Nihonbashi provided easy access to many parts throughout ancient Japan.