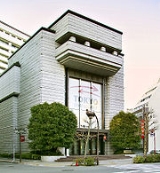 Overview
The , called or TSE for short, is located in Tokyo
Tokyo
, ; officially , is one of the 47 prefectures of Japan. Tokyo is the capital of Japan, the center of the Greater Tokyo Area, and the largest metropolitan area of Japan. It is the seat of the Japanese government and the Imperial Palace, and the home of the Japanese Imperial Family...
, Japan
Japan
Japan is an island nation in East Asia. Located in the Pacific Ocean, it lies to the east of the Sea of Japan, China, North Korea, South Korea and Russia, stretching from the Sea of Okhotsk in the north to the East China Sea and Taiwan in the south...
and is the third largest stock exchange
Stock exchange
A stock exchange is an entity that provides services for stock brokers and traders to trade stocks, bonds, and other securities. Stock exchanges also provide facilities for issue and redemption of securities and other financial instruments, and capital events including the payment of income and...
in the world by aggregate market capitalization
Market capitalization
Market capitalization is a measurement of the value of the ownership interest that shareholders hold in a business enterprise. It is equal to the share price times the number of shares outstanding of a publicly traded company...
of its listed companies. The Tokyo Stock Exchange had 2,292 listed companies with a combined market capitalization of US$3.8 trillion as of Dec 2010.
The TSE is incorporated as a kabushiki kaisha
Kabushiki kaisha
is a type of business defined under Japanese law.-Usage in language:Both kabushiki kaisha and the rendaku form kabushiki gaisha are used. The "K" spelling is much more common in the names of companies and in English-language legal literature, whereas the "G" pronunciation is dominant in...
with nine directors, four auditors and eight executive officers. Its headquarters are located at 2-1 Nihonbashi
Nihonbashi
, or Nihombashi, is a business district of Chūō, Tokyo, Japan which grew up around the bridge of the same name which has linked two sides of the Nihonbashi River at this site since the 17th century. The first wooden bridge was completed in 1603, and the current bridge made of stone dates from 1911...
-kabutocho, Chūō, Tokyo
Chuo, Tokyo
is one of the 23 special wards that form the heart of Tokyo, Japan. The ward refers to itself as Chūō City in English.Its Japanese name literally means "Central Ward," and it is historically the main commercial center of Tokyo, although Shinjuku has risen to challenge it since the end of World War II...
.