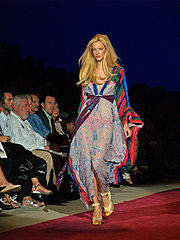 The semi-annual New York Fashion Week, branded
Brand
The American Marketing Association defines a brand as a "Name, term, design, symbol, or any other feature that identifies one seller's good or service as distinct from those of other sellers."...
Mercedes-Benz FashionWeek in 2009, is held in February and September of each year in New York City
New York City
New York is the most populous city in the United States and the center of the New York Metropolitan Area, one of the most populous metropolitan areas in the world. New York exerts a significant impact upon global commerce, finance, media, art, fashion, research, technology, education, and...
. It is one of four major fashion week
Fashion Week
A fashion week is a fashion industry event, lasting approximately one week, which allows fashion designers, brands or "houses" to display their latest collections in runway shows and buyers and the media to take a look at the latest trends. Most importantly, these events let the industry know...
s held around the world (along with those in Paris
Paris
Paris is the capital and largest city in France, situated on the river Seine, in northern France, at the heart of the Île-de-France region...
, London
London
London is the capital city of :England and the :United Kingdom, the largest metropolitan area in the United Kingdom, and the largest urban zone in the European Union by most measures. Located on the River Thames, London has been a major settlement for two millennia, its history going back to its...
, and Milan
Milan
Milan is the second-largest city in Italy and the capital city of the region of Lombardy and of the province of Milan. The city proper has a population of about 1.3 million, while its urban area, roughly coinciding with its administrative province and the bordering Province of Monza and Brianza ,...
).

The first New York Fashion Week, then called Press Week, was the world's first organized fashion week. Held in 1943, the event was designed to attract attention away from French fashion during World War II
World War II
World War II, or the Second World War , was a global conflict lasting from 1939 to 1945, involving most of the world's nations—including all of the great powers—eventually forming two opposing military alliances: the Allies and the Axis...
, when fashion industry insiders were unable to travel to Paris to see French fashion shows. Fashion publicist Eleanor Lambert
Eleanor Lambert
Eleanor Lambert Berkson -Background:Born in Crawfordsville Indiana. She attended the John Herron School of Art and the Chicago Art Institute to study Fashion. She started at an advertising agency in Manhattan New York, dealing mostly with artists and art galleries...
organized an event she called "Press Week" to showcase American designers for fashion journalists
Fashion journalism
Fashion journalism is an umbrella term used to describe all aspects of published fashion media. It includes fashion writers, fashion critics or fashion reporters...
, who had previously neglected their innovations. (Buyers were not admitted to the shows and instead had to visit designers' showrooms.) Press Week was a success, and fashion magazines like Vogue
Vogue (magazine)
Vogue is a fashion and lifestyle magazine that is published monthly in 18 national and one regional edition by Condé Nast.-History:In 1892 Arthur Turnure founded Vogue as a weekly publication in the United States. When he died in 1909, Condé Montrose Nast picked up the magazine and slowly began...
, which were normally filled with French designs, increasingly featured American fashion.

In 1994, the event was moved to its former site in Bryant Park
Bryant Park
Bryant Park is a 9.603 acre privately managed public park located in the New York City borough of Manhattan. It is located between Fifth and Sixth Avenues and between 40th and 42nd Streets in Midtown Manhattan...
by Fern Mallis
Fern Mallis
Fern Mallis in Brooklyn, New York, was the Executive Director of 7th on Sixth productions, the Vice President of marketing for International Management Group models, as well as the Vice President of IMG fashion...
, where it was held inside a series of large white tents in the almost-block-long park. Admission is by invitation only, to the fashion industry, fashion press, assorted celebrities, and internet based Fashion press (e.g. District L, Fashionista, FWD). Beginning in February 2009 (showing Fall 2009), many designers opted out of their usual Bryant Park tent fashion shows because of the poor economy and held smaller presentations.

At the Fall 2009 Fashion Week the public got a taste of technology as it is shaping the future of fashion. It is not only making it cheaper and easier for designers to create their collections, it is also saving them travel time as many broadcast their lines over the Internet. Many designers opted to not only market online but also sell exclusively online. Designer Norma Kamali
Norma Kamali
Norma Kamali is a New York-based fashion designer born in 1945. She is best known for the "sleeping bag" coat, "parachute pants" made from silk parachutes, and versatile multi-use pieces. She designed the red one-piece bathing suit worn by Farah Fawcett in the iconic 1976 Charlie's Angels poster....
and the Polo Ralph Lauren Rugby brand both have an application for the Apple iPhone. In the Vivienne Tam
Vivienne Tam
Vivienne Tam is a fashion designer based in New York City. She was born in Guangzhou, China and moved to Hong Kong at the age of three. She attended Hong Kong Polytechnic University....
show, models walked the runway carrying Hewlett Packard mini notebook computers instead of the expected handbag.

Because of the recession affecting most of the world, designers were stepping outside of the box for fall 2009. In previous years, fashion houses would be expecting costs up to $750,000 to produce a quality runway show. The idea of using mannequins to display clothing was used by established designers Betsey Johnson
Betsey Johnson
Betsey Johnson is an American fashion designer best known for her feminine and whimsical designs. Many of her designs are considered "over the top" and embellished...
and Vera Wang
Vera Wang
Vera Ellen Wang is a Chinese American fashion designer based in New York City and former figure skater. She is known for her wide clientele of couture bridesmaid gowns and wedding gown collections.-Personal life:...
as a way to cut model and runway costs. Mara Hoffman, Sergio Davila and Nicholas K saved 40 percent of their costs by combining their separate lines into one show. Another trend seen during fall 2009 Fashion Week was recession friendly fashion. A number of pieces displayed were items that could be worn in the fall and carry over to the spring. A popular staple was bold color dressed that could be worn over a turtleneck in colder weather and stand alone in the spring; convertible blazers were introduced by Vera Wang and Karen Walker as a way to get double the wear out of one piece.

In addition to the new location, Mercedes-Benz Fashion Week partnered with Fashion GPS
Fashion GPS
Fashion GPS is a customized software system for sample, events and public relations management solutions. Fashion GPS uses a global, web-based technology, allowing for better designer, editorial and stylist communication...
, a new technology that offered quick seating and check-in for guests at the shows.
Mercedes-Benz Fashion Week is perhaps the most well-known event held during New York Fashion Week, but not the only one. Many top-name designers show their collections at other venues, including Ralph Lauren
Ralph Lauren
Ralph Lauren is an American fashion designer and business executive; best known for his Polo Ralph Lauren clothing brand.-Early life:...
, Donna Karan
Donna Karan
Donna Karan is an American fashion designer and the creator of the Donna Karan New York and DKNY clothing labels.-Early life:...
, Calvin Klein
Calvin Klein
Calvin Richard Klein is an American fashion designer who launched the company that would later become Calvin Klein Inc. in 1968. In addition to clothing, Klein has also given his name to a range of perfumes, watches, and jewelry....
and Marc Jacobs
Marc Jacobs
Marc Jacobs is an American fashion designer. He is the head designer for Marc Jacobs, as well as Marc by Marc Jacobs, a diffusion line, with more than 200 retail stores in 60 countries. He has been the creative director of the French design house Louis Vuitton since 1997...
. Dozens of other fashion shows and related events are held around the city during New York Fashion Week, including Couture Fashion Week NY at the Waldorf-Astoria and iFashion Week by iFashion Network and iConcept Media Group focusing on emerging and independent designers.

There initially appeared to be a trend toward darker and more sombre designs.