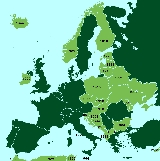 Encyclopedia
New Europe is a rhetorical term used by conservative
American conservatism
Conservatism in the United States has played an important role in American politics since the 1950s. Historian Gregory Schneider identifies several constants in American conservatism: respect for tradition, support of republicanism, preservation of "the rule of law and the Christian religion", and...
political analysts in the United States
United States
The United States of America is a federal constitutional republic comprising fifty states and a federal district...
to describe Europe
Europe
Europe is, by convention, one of the world's seven continents. Comprising the westernmost peninsula of Eurasia, Europe is generally 'divided' from Asia to its east by the watershed divides of the Ural and Caucasus Mountains, the Ural River, the Caspian and Black Seas, and the waterways connecting...
an post-Communist era
Post-Communism
Post-communism is a name sometimes given to the period of political and economic transformation or "transition" in former Communist states located in parts of Europe and Asia, in which new governments aimed to create free market-oriented capitalist economies with some form of parliamentary...
countries. The "newness" of these countries refers not to the length of time they have been independent, but to the fact that they have only recently re-acquired the status of capitalist democracies.

"New European" countries were originally distinguished by their governments' support of the 2003 war in Iraq
2003 invasion of Iraq
The 2003 invasion of Iraq , was the start of the conflict known as the Iraq War, or Operation Iraqi Freedom, in which a combined force of troops from the United States, the United Kingdom, Australia and Poland invaded Iraq and toppled the regime of Saddam Hussein in 21 days of major combat operations...
, as opposed to an "Old Europe
Old Europe
Old Europe is a term that was first used by then-U.S. Secretary of Defense Donald Rumsfeld in January 2003 to refer to European countries that did not support the 2003 invasion of Iraq, specifically France and Germany...
" noted as unsupportive of that war. Even initially, however, the term was not based solely on this fact. The governments of several other countries, such as the UK
United Kingdom
The United Kingdom of Great Britain and Northern IrelandIn the United Kingdom and Dependencies, other languages have been officially recognised as legitimate autochthonous languages under the European Charter for Regional or Minority Languages...
, Denmark
Denmark
Denmark is a Scandinavian country in Northern Europe. The countries of Denmark and Greenland, as well as the Faroe Islands, constitute the Kingdom of Denmark . It is the southernmost of the Nordic countries, southwest of Sweden and south of Norway, and bordered to the south by Germany. Denmark...
, the Netherlands
Netherlands
The Netherlands is a constituent country of the Kingdom of the Netherlands, located mainly in North-West Europe and with several islands in the Caribbean. Mainland Netherlands borders the North Sea to the north and west, Belgium to the south, and Germany to the east, and shares maritime borders...
, Italy
Italy
Italy , officially the Italian Republic languages]] under the European Charter for Regional or Minority Languages. In each of these, Italy's official name is as follows:;;;;;;;;), is a unitary parliamentary republic in South-Central Europe. To the north it borders France, Switzerland, Austria and...
, Portugal
Portugal
Portugal , officially the Portuguese Republic is a country situated in southwestern Europe on the Iberian Peninsula. Portugal is the westernmost country of Europe, and is bordered by the Atlantic Ocean to the West and South and by Spain to the North and East. The Atlantic archipelagos of the...
and Spain
Spain
Spain , officially the Kingdom of Spain languages]] under the European Charter for Regional or Minority Languages. In each of these, Spain's official name is as follows:;;;;;;), is a country and member state of the European Union located in southwestern Europe on the Iberian Peninsula...
also supported the war, but are not commonly conceived as belonging to a New Europe. It is also worthy to note that while New Europe countries did not experience protests on the scale seen in Old Europe, neither was the support for operation in Iraq a major issue in their internal politics.