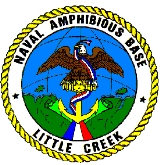 The mission of the Naval Amphibious Base is to provide required support services to over 15,000 personnel of the 27 homeported ships and 78 resident and/or supported activities. The base's combination of operational, support, and training facilities are geared predominantly to amphibious operations, making the base unique among bases of the United States and Allied Navies.

The Naval Amphibious Base, Little Creek is the largest base of its kind in the world.

Near an inlet called "Little Creek" the truck stopped in a waterlogged bean field of the Whitehurst family's farm. For days thereafter, trucks loaded with lumber and equipment rolled into the area in almost continuous succession. The reason for this mass assault in a bean field 12 miles (19.3 km) northeast of Norfolk was that, early in World War II
World War II
World War II, or the Second World War , was a global conflict lasting from 1939 to 1945, involving most of the world's nations—including all of the great powers—eventually forming two opposing military alliances: the Allies and the Axis...
, Navy planners saw a necessity for landing large numbers of American troops on foreign shores in the face of enemy gunfire. That such operations would be difficult was also evident. New methods and techniques in landing troops would have to be developed. Training would be needed before sufficient men were proficient in the complicated art of the amphibious
Amphibious warfare
Amphibious warfare is the use of naval firepower, logistics and strategy to project military power ashore. In previous eras it stood as the primary method of delivering troops to non-contiguous enemy-held terrain...
assault, which would enable U.S. troops to drive to the heart of the enemy.

The base was initially established in the farmland of Princess Anne County
Princess Anne County, Virginia
Princess Anne County is a former county which was created in the British Colony of Virginia and the Commonwealth of Virginia in the United States in 1691. The county was merged into the city of Virginia Beach...
. During the early phases of World War II the base was literally a combination of farmland and swamp
Swamp
A swamp is a wetland with some flooding of large areas of land by shallow bodies of water. A swamp generally has a large number of hammocks, or dry-land protrusions, covered by aquatic vegetation, or vegetation that tolerates periodical inundation. The two main types of swamp are "true" or swamp...
s. Four bases were constructed on this area: Camp Bradford, Camp Shelton, U.S. Naval Frontier Base, and Amphibious Training Base.
Camps Bradford and Shelton were named for the former owners of the land.

At the new bases, the techniques of training had to be developed from scratch. Facilities for the upkeep of equipment as well as living facilities for personnel were primitive. The newcomers found few buildings and practically no roads or utilities. Just bean vines. After various improvisations along came temporary buildings that were later to give the site some resemblance to a naval base.

In a few months the trained men who were to land fighting forces from Africa
Africa
Africa is the world's second largest and second most populous continent, after Asia. At about 30.2 million km² including adjacent islands, it covers 6% of the Earth's total surface area and 20.4% of the total land area...
to Normandy
Normandy
Normandy is a geographical region corresponding to the former Duchy of Normandy. It is in France.The continental territory covers 30,627 km² and forms the preponderant part of Normandy and roughly 5% of the territory of France. It is divided for administrative purposes into two régions:...
were ready for sea. During World War II over 200,000 Naval personnel and 160,000 Army
United States Army
The United States Army is the main branch of the United States Armed Forces responsible for land-based military operations. It is the largest and oldest established branch of the U.S. military, and is one of seven U.S. uniformed services...
and Marine Corps personnel trained at Little Creek.

The four bases were partially inactivated at the end of hostilities of World War II. Shortly thereafter, however, the bases at Little Creek, because of their central location on the Atlantic coast, excellent and varied beach conditions, proximity to the naval facilities of Norfolk
Naval Station Norfolk
Naval Station Norfolk, in Norfolk, Virginia, is a base of the United States Navy, supporting naval forces in the United States Fleet Forces Command, those operating in the Atlantic Ocean, Mediterranean Sea, and Indian Ocean...
, berthing facilities for amphibious ships through the size of LSTs, and other advantages, were consolidated into the present installation and renamed the Naval Amphibious Base, Little Creek with a commissioning date of August 10, 1945. It was designated a permanent base in 1946.

In 1963, the growing county was consolidated with its tiny resort city neighbor, forming the "new" City of Virginia Beach
Virginia Beach, Virginia
Virginia Beach is an independent city located in the Hampton Roads metropolitan area of Virginia, on the Atlantic Ocean at the mouth of the Chesapeake Bay...
, one of Virginia's largest.

Growing over the years to meet the needs of the Amphibious Force, the base has developed into one of the most modern in the Navy. Thousands of men and women from all branches of the Armed Forces, as well as military students from foreign nations, now pass through the gates of the Naval Amphibious Base yearly for training in amphibious warfare.

Amphibious warfare adds a crucial measure of leverage to conducting a maritime campaign successfully. National maritime strategy seeks to deter war if at all possible, but if deterrence fails, to destroy enemy maritime forces, protect allied sea lines of communication, support the land campaign, and secure favorable leverage for termination of hostilities. It is a truly global strategy, requiring the ability to dominate the world's oceans and the flexibility of force employment that only naval forces can provide. Naval forces are viewed as central elements of American military strategy. The Navy/Marine Corps team provides an effective amphibious striking arm in support of the national military strategy. Today nearly 13,000 Sailors, Marines, and civilian employees are assigned to the various stations or attend schools at the Naval Amphibious Base, Little Creek in support of the Navy/Marine Corps team.