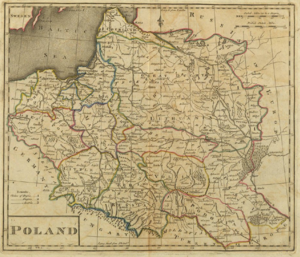 The Polish
Polish language
Polish is a language of the Lechitic subgroup of West Slavic languages, used throughout Poland and by Polish minorities in other countries...
words for a Pole are Polak (masculine) and Polka (feminine), Polki being the plural form for two or more women and Polacy being the plural form for the rest. The adjective "Polish" translates to Polish as polski (masculine), polska (feminine) and polskie (neuter). The common Polish name for Poland
Poland
Poland , officially the Republic of Poland , is a country in Central Europe bordered by Germany to the west; the Czech Republic and Slovakia to the south; Ukraine, Belarus and Lithuania to the east; and the Baltic Sea and Kaliningrad Oblast, a Russian exclave, to the north...
is Polska. The latter Polish word is an adjectival form which has developed into a substantive noun
Noun
In linguistics, a noun is a member of a large, open lexical category whose members can occur as the main word in the subject of a clause, the object of a verb, or the object of a preposition .Lexical categories are defined in terms of how their members combine with other kinds of...
, most probably originating in the phrase polska ziemia, meaning "Polish land".

Polska was initially a name used by the Polans to describe their own tribal territory in the Warta River
Warta River
The Warta is a river in western-central Poland, a tributary of the Oder river. With a length of approximately it is the country's third longest river. The Warta has a basin area of 54,529 square kilometers...
basin. During the 10th century, the Polans managed to subdue and unite the Slavic tribes between the rivers Oder
Oder
The Oder is a river in Central Europe. It rises in the Czech Republic and flows through western Poland, later forming of the border between Poland and Germany, part of the Oder-Neisse line...
and Bug River
Bug River
The Bug River is a left tributary of the Narew river flows from central Ukraine to the west, passing along the Ukraine-Polish and Polish-Belarusian border and into Poland, where it empties into the Narew river near Serock. The part between the lake and the Vistula River is sometimes referred to as...
into a single feudal state and in the early 11th century, the name Polska was extended to the entire ethnically Polish territory. The lands originally inhabited by the Polans became known as Staropolska, or "Old Poland", and later as Wielkopolska, or "Greater Poland
Greater Poland
Greater Poland or Great Poland, often known by its Polish name Wielkopolska is a historical region of west-central Poland. Its chief city is Poznań.The boundaries of Greater Poland have varied somewhat throughout history...
", while the lands conquered towards the end of the 10th century, home of the Vistulans
Vistulans
Vistulans were an early medieval West Slavic tribe inhabiting the land of modern Lesser Poland.From the 1st century and possibly earlier, the Vistulans , were part of the Carpian Tribe, which got its name from the area that they lived in, which was beside the Carpathian Mountain Range...
(Wiślanie) and the Lendians
Lendians
The Lendians were a Lechitic eastern Wends tribe recorded to have inhabited the ill-defined area in East Lesser Poland and Cherven Towns between the 7th and 11th centuries....
, became known as Małopolska, or "Lesser Poland
Lesser Poland
Lesser Poland is one of the historical regions of Poland, with its capital in the city of Kraków. It forms the southeastern corner of the country, and should not be confused with the modern Lesser Poland Voivodeship, which covers only a small, southern part of Lesser Poland...
".

In Polish literature, Poland is sometimes referred to as Lechia
Lechia
Lechia is the historical and/or alternative name of Poland., stemming from the word Lech . It is still present in several European languages and some languages of Central Asia and the Middle East:...
, derived from Lech, the legendary founder of Poland
Lech, Czech and Rus
Lech, Čech, and Rus is a legend of three brothers – Lech, Čech, and Rus – who founded three Slavic nations: Poland , Bohemia, and Ruthenia...
.

In the 17th-18th centuries, Sarmaci ("Sarmatians") was a popular name by which Polish nobles referred to themselves (see Sarmatism
Sarmatism
"Sarmatism" is a term designating the dominant lifestyle, culture and ideology of the szlachta of the Polish-Lithuanian Commonwealth from the 16th to the 19th centuries. Together with "Golden Liberty," it formed a central aspect of the Commonwealth's culture...
).

Exonyms for Poland in other Slavic languages
Slavic languages
The Slavic languages , a group of closely related languages of the Slavic peoples and a subgroup of Indo-European languages, have speakers in most of Eastern Europe, in much of the Balkans, in parts of Central Europe, and in the northern part of Asia.-Branches:Scholars traditionally divide Slavic...
bear particular resemblance to the Polish endonym:

In Latin
Latin
Latin is an Italic language originally spoken in Latium and Ancient Rome. It, along with most European languages, is a descendant of the ancient Proto-Indo-European language. Although it is considered a dead language, a number of scholars and members of the Christian clergy speak it fluently, and...
, which was the principal written language of the Middle Ages
Middle Ages
The Middle Ages is a periodization of European history from the 5th century to the 15th century. The Middle Ages follows the fall of the Western Roman Empire in 476 and precedes the Early Modern Era. It is the middle period of a three-period division of Western history: Classic, Medieval and Modern...
, the exonym for Poland became Polonia. It later became the basis for Poland's name in all Romance
Romance languages
The Romance languages are a branch of the Indo-European language family, more precisely of the Italic languages subfamily, comprising all the languages that descend from Vulgar Latin, the language of ancient Rome...
languages:

Many other languages (e.g. Albanian
Albanian language
Albanian is an Indo-European language spoken by approximately 7.6 million people, primarily in Albania and Kosovo but also in other areas of the Balkans in which there is an Albanian population, including western Macedonia, southern Montenegro, southern Serbia and northwestern Greece...
Polonia; Greek
Greek language
Greek is an independent branch of the Indo-European family of languages. Native to the southern Balkans, it has the longest documented history of any Indo-European language, spanning 34 centuries of written records. Its writing system has been the Greek alphabet for the majority of its history;...
Πολωνία, Polōnía) use the Latin name.

Germans
Germans
The Germans are a Germanic ethnic group native to Central Europe. The English term Germans has referred to the German-speaking population of the Holy Roman Empire since the Late Middle Ages....
, Poland's western neighbors, called it Polen from which exonyms for Poland in other Germanic languages
Germanic languages
The Germanic languages constitute a sub-branch of the Indo-European language family. The common ancestor of all of the languages in this branch is called Proto-Germanic , which was spoken in approximately the mid-1st millennium BC in Iron Age northern Europe...
are:

Name for Poland is derived from the Germanic name in:

There is, however, a group of languages, where the exonym for Poland derives from the name of Lendians
Lendians
The Lendians were a Lechitic eastern Wends tribe recorded to have inhabited the ill-defined area in East Lesser Poland and Cherven Towns between the 7th and 11th centuries....
, a proto-Polish tribe that lived around the confluence of rivers Vistula
Vistula
The Vistula is the longest and the most important river in Poland, at 1,047 km in length. The watershed area of the Vistula is , of which lies within Poland ....
and San
San River
The San is a river in southeastern Poland and western Ukraine, a tributary of the Vistula River, with a length of 433 km and a basin area of 16,861 km2...
, in what is now south-eastern Poland. Their name derived probably from the Proto-Polish word lęda, or "scorched land". Not surprisingly, exonyms of this kind are used primarily by the peoples who lived east or south of Poland. Among those exonyms are:

Some common English words, as well as scientific nomenclature, derive from exonyms of Poland in various languages.

From the middle 15th-century into the early 19th-century, the name Poles (Polak, Polacy) means only the of all gentry
Gentry
Gentry denotes "well-born and well-bred people" of high social class, especially in the past....
, called szlachta
Szlachta
The szlachta was a legally privileged noble class with origins in the Kingdom of Poland. It gained considerable institutional privileges during the 1333-1370 reign of Casimir the Great. In 1413, following a series of tentative personal unions between the Grand Duchy of Lithuania and the Kingdom of...
. Poles, consisting only of middle and petty nobles, regardless of ethnic origin and religious beliefs. All of these nobles formed the
privileged class
Golden Liberty
Golden Liberty , sometimes referred to as Golden Freedoms, Nobles' Democracy or Nobles' Commonwealth refers to a unique aristocratic political system in the Kingdom of Poland and later, after the Union of Lublin , in the Polish-Lithuanian Commonwealth...
.