The site was first discovered in 1930 by aerial photos taken of the region, but excavations of the site did not take place until 1962. Archaeologist Ian Graham
Ian Graham
Ian Graham is a former Australian rules footballer who played with Collingwood in the VFL during the 1960s.His best season came in 1964 when he won the Copeland Trophy for Collingwood's Best and Fairest player...
was the first person to start excavations, but it wasn’t until the 1980s and 90s that real excavation began by UCLA’s Institute of Geophysics and Planetary Sciences, and the Institute of Anthropology and History of Guatemala. The combined efforts of these two groups resulted in the RAINPEG Project, which was headed by Dr. Richard D. Hansen
Richard D. Hansen
Dr. Richard D. Hansen, Ph.D, is a prominent American archaeologist and currently Senior Scientist at the Institute for Mesoamerican Research in the Department of Anthropology at Idaho State University. Dr. Hansen is a specialist on the ancient Maya and also a director of the Mirador Basin...
. One of the main focuses of the RAINPEG Project was to investigate the limestone
Limestone
Limestone is a sedimentary rock composed largely of the minerals calcite and aragonite, which are different crystal forms of calcium carbonate . Many limestones are composed from skeletal fragments of marine organisms such as coral or foraminifera....
quarries in the area of Nakbé

Nakbe was a key site to the Maya because of its extensive quarry system of limestone, a key element to the building of the many large temples.

The RAINPEC Project spent much of its energy excavating and studying the tools that were used in limestone excavation and preparation. They had unearthed 23 tools including bifacial axes, picks, and hammer stones, all of which were made of chert
Chert
Chert is a fine-grained silica-rich microcrystalline, cryptocrystalline or microfibrous sedimentary rock that may contain small fossils. It varies greatly in color , but most often manifests as gray, brown, grayish brown and light green to rusty red; its color is an expression of trace elements...
. The researches then replicated these tools to see what the methods of mining and shaping the limestone were. Not only did they come to realize that chert was an excellent tool for precision cutting of limestone, but these experiments shed light on how the Maya not only harvested the limestone, but how they shaped it to use for their elaborate complex architectural building.


Artifacts found at the site

The site center has yielded large quantities of middle Preclassic ceramic
Ceramic
A ceramic is an inorganic, nonmetallic solid prepared by the action of heat and subsequent cooling. Ceramic materials may have a crystalline or partly crystalline structure, or may be amorphous...
s. Pottery found at the site includes red-on-cream items, multi-colored bowls, incised bowls, narrow-necked jars with coarsely painted bands, and a wide variety of monochrome vessels that are red, cream, or black. Many tecomates (jars with narrow openings but without necks) were found. Also found were numerous fragments of figurines depicting a wide variety of human and animal forms. Shells through which holes were ground were a common find at the site. Many were Strombus shells, a type of artifact unique to the first part of the middle Preclassic at Nakbe, Uaxactun
Uaxactun
Uaxactun is an ancient ruin of the Maya civilization, located in the Petén Basin region of the Maya lowlands, in the present-day department of Petén, Guatemala. The site lies some north of the major center of Tikal...
, Tikal
Tikal
Tikal is one of the largest archaeological sites and urban centres of the pre-Columbian Maya civilization. It is located in the archaeological region of the Petén Basin in what is now northern Guatemala...
, and other sites where similarly dated deposits are located.

The shells reflect one of the earliest major imports into the interior of northern Guatemala, and Richard Hansen believes they and similar exotic imports, such as Jade
Jade
Jade is an ornamental stone.The term jade is applied to two different metamorphic rocks that are made up of different silicate minerals:...
and obsidian (a volcanic glass from which sharp tools could be fashioned), played an important role in the formation of an increasingly complex society. The demand for these materials, mainlly from Kaminal Juyú, in the Central Highlands of Guatemala, whether for ideological or economic reasons, and the mechanisms of procurement, transportation, and distribution that met that demand, may have required the development of administrative and governmental organizations at an earlier stage in this region than in areas where those commodities were more readily available.

Fairly direct evidence of developing differences in social and economic status includes human incisors with inlaid disks of jadelike stone, found in deposits dating to about 2,800 years ago. Such dental decorations are known to have been associated with elite status in later Maya periods. Archaeologists also found a middle Preclassic ceramic shard with a portion of an incised profile that displays the sloping forehead characteristic of later Maya elite society. This was a frontal cranial deformation that resulted from binding the head in infancy.

Nakbe had established monumental architecture as early as the eighth century BC
8th century BC
The 8th century BC started the first day of 800 BC and ended the last day of 701 BC.-Overview:The 8th century BC was a period of great changes in civilizations. In Egypt, the 23rd and 24th dynasties led to rule from Nubia in the 25th Dynasty...
, with some platforms 18 m (59 ft) high. Around 1200 BC modest villages were leveled and filled to serve as platform foundations for large new buildings, indicating that the platform construction and erection of monumental architecture were planned, simultaneous events. There are many buildings at Nakbe and they are divided into three groups. Two of these groups, called East and West, were constructed during the formative periods and the third group, called Codex, was constructed during the reoccupation of the site in the late classic period. The most impressive and largest of the buildings at Nakbe is a pyramid called Structure 1. Flanked by two large stucco masks and topped with three triadic style
Triadic pyramid
Triadic pyramids are a Preclassic Maya civilization innovation consisting of a dominant structure flanked by two smaller inward-facing buildings, all mounted upon a single basal platform...
roofed structures, Structure 1 is both grand and beautiful. Causeway
Causeway
In modern usage, a causeway is a road or railway elevated, usually across a broad body of water or wetland.- Etymology :When first used, the word appeared in a form such as “causey way” making clear its derivation from the earlier form “causey”. This word seems to have come from the same source by...
s were also built to connect all these buildings. Maya causeways were paved with crushed white stone, which inspired their Mayan name, sacbe (“white way”) The Kan Causeway at Nakbe was 4 m (13 ft) above adjacent ground level in some places. One causeway was also built that connected Nakbe with El Mirador. 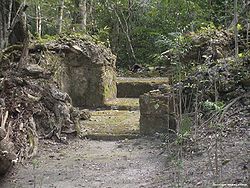 A causeway
Causeway
In modern usage, a causeway is a road or railway elevated, usually across a broad body of water or wetland.- Etymology :When first used, the word appeared in a form such as “causey way” making clear its derivation from the earlier form “causey”. This word seems to have come from the same source by...
system linked important features of the city to one another and later linked Nakbé with other sites. These causeways were often created above the ground level; the Kan Causeway was 4 meters (13 ft) above the ground level in some areas. These causeways were paved with crushed white stone, which created the naming of these causeways from the Maya name sacbe
Sacbe
right|thumb|Sacbe at Dzibilchaltun in the Yucatánthumb|right|Arch at the end of the sacbé, Kabah, YucatánSacbe, plural Sacbeob, or "white ways" are raised paved roads built by the Maya civilization of pre-Columbian Mesoamerica...
("white way"). Nakbe was connected to El Mirador by one causeway and later in the Late Classic Maya period Nakbe was connected to the Maya center of Calakmul
Calakmul
Calakmul is a Maya archaeological site in the Mexican state of Campeche, deep in the jungles of the greater Petén Basin region. It is from the Guatemalan border. Calakmul was one of the largest and most powerful ancient cities ever uncovered in the Maya lowlands...
. Other sites besides Nakbé and El Mirador were connected through this system of sacbeob, which extended for dozens of kilometers.


Research on quarries at Nakbe

The limestone
Limestone
Limestone is a sedimentary rock composed largely of the minerals calcite and aragonite, which are different crystal forms of calcium carbonate . Many limestones are composed from skeletal fragments of marine organisms such as coral or foraminifera....
quarries
Quarry
A quarry is a type of open-pit mine from which rock or minerals are extracted. Quarries are generally used for extracting building materials, such as dimension stone, construction aggregate, riprap, sand, and gravel. They are often collocated with concrete and asphalt plants due to the requirement...
of Nakbe were a significant facet of the research done by The RAINPEG group. Research of the quarries is of considerable importance because understanding of Mayan quarries, a prevalent aspect of the Mayan culture, is lacking. Excavations recovered 23 stone tools that were used to cut the limestone blocks. These tools consisted of bifacial picks and axes, hammerstones, and flake cores that were made of chert. Archaeologists made replicas of these tools to use in experimenting with the cutting and shaping of limestone blocks. By studying the evidence of wear and polish of the tools along with the cut marks on quarry walls, researchers were able to determine how these tools were used and what kind of handles were attached. They made longhandled picks which they used to cut the limestone from the bedrock. Then they used the stone axes to cut and form the block the way they wanted. The results of these experiments have showed that chert
Chert
Chert is a fine-grained silica-rich microcrystalline, cryptocrystalline or microfibrous sedimentary rock that may contain small fossils. It varies greatly in color , but most often manifests as gray, brown, grayish brown and light green to rusty red; its color is an expression of trace elements...
was a very effective and durable stone to use for the cutting of limestone and other materials. Excavations and research at Nakbe gives us a better understanding of the techniques that the Maya used to construct some of the most extraordinary structures of ancient times and the complications they had to endure along the way.


Religion and iconography at Nakbe

Nakbe Stela 1 consists of forty-five fragments of a once 11 ft (3.4 m). tall monument that had been smashed in antiquity. After pieced together, the stela depicts a scene with two individuals standing face to face and dressed in costumes of a very early Mayan style. One figure is pointing upwards with an index finger to a disembodied head. The scene has been interpreted as a representation from the Popol Vuh
Popol Vuh
Popol Vuh is a corpus of mytho-historical narratives of the Post Classic Quiché kingdom in Guatemala's western highlands. The title translates as "Book of the Community," "Book of Counsel," or more literally as "Book of the People."...
. The two figures appear to portray the supernatural twins Hun-Apu and Ixbalanque, with Ixbalanque pointing towards his father’s severed head indicating his connection to a royal lineage.


Decline of the site

While at least some remains have been found from nearly every period of Maya society at Nakbe, the site was never a major center after the beginning of the late Preclassic period. The last construction phases of the largest pyramids at Nakbe date to the beginning of this period. Late Preclassic artifacts have proved sparse throughout the site of Nakbe, perhaps because the settlement was rapidly eclipsed by the rise of El Mirador. Nakbe remained virtually abandoned for a thousand years, until some late Classic Maya reoccupied the site. These people established small communities in and around the ruins and left some fine examples of Classic ceramics, but they built no monuments of their own.