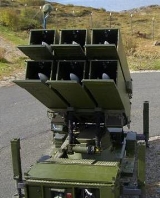 Encyclopedia
NASAMS is a distributed and networked medium to long range air-defence system
Anti-aircraft warfare
NATO defines air defence as "all measures designed to nullify or reduce the effectiveness of hostile air action." They include ground and air based weapon systems, associated sensor systems, command and control arrangements and passive measures. It may be to protect naval, ground and air forces...
. NASAMS was the first surface-based application for the AIM-120 AMRAAM
AIM-120 AMRAAM
The AIM-120 Advanced Medium-Range Air-to-Air Missile, or AMRAAM , is a modern beyond-visual-range air-to-air missile capable of all-weather day-and-night operations. Designed with the same form-factor as the previous generation of semi-active guided Sparrow missiles, it is a fire-and-forget...
(Advanced Medium Range Air-to-Air Missile) and the first surface-to-air missile system in the western world with active radar guidance
Active radar homing
Active radar homing is a missile guidance method in which a guided missile contains a radar transceiver and the electronics necessary for it to find and track its target autonomously...
. The missile itself is named SL-AMRAAM (Surfaced Launched AMRAAM).

The Norwegian company Kongsberg Defence & Aerospace
Kongsberg Defence & Aerospace
Kongsberg Defence & Aerospace , one of two operating companies of Kongsberg Gruppen of Norway, is a supplier of defence and space related systems and products, mainly anti-ship missiles, military communications, and command and weapons control systems for naval vessels and air-defence applications...
teamed up with Raytheon
Raytheon
Raytheon Company is a major American defense contractor and industrial corporation with core manufacturing concentrations in weapons and military and commercial electronics. It was previously involved in corporate and special-mission aircraft until early 2007...
and initiated the NASAMS programme as a cooperative effort for the Royal Norwegian Air Force
Royal Norwegian Air Force
The Royal Norwegian Air Force is the air force of Norway. It was established as a separate arm of the Norwegian armed forces on 10 November 1944. The RNoAF's peace force is approximately 1,430 employees . 600 personnel also serve their draft period in the RNoAF...
. The state-of-the-art network-centric air defence system NASAMS was declared fully operational capable in 1998 but had an initial operational capability as early as in 1994/95.

Until the late 1990s the RNoAF ground based air defence solution, also known as the Norwegian Solution (NORSOL), consisted of three different weapon systems; the 40mm Bofors
Bofors
The name Bofors has been associated with the iron industry for more than 350 years.Located in Karlskoga, Sweden, the company originates from the hammer mill "Boofors" founded 1646. The modern corporate structure was created in 1873 with the foundation of Aktiebolaget Bofors-Gullspång...
L70 gun
Bofors 40 mm gun
The Bofors 40 mm gun is an anti-aircraft autocannon designed by the Swedish defence firm of Bofors Defence...
(controlled by the Oerlikon Contraves
Oerlikon Contraves
Rheinmetall Air Defence AG is a division of German armament manufacturer Rheinmetall, created when the company's Oerlikon Contraves unit was renamed on 1 January 2009 and integrated with Rheinmetall's other air-defence products...
FCS2000 monopulse
Monopulse radar
Monopulse radar is an adaptation of conical scanning radar which sends additional information in the radar signal in order to avoid problems caused by rapid changes in signal strength. The system also makes jamming more difficult...
doppler tracking radar
Doppler radar
A Doppler radar is a specialized radar that makes use of the Doppler effect to produce velocity data about objects at a distance. It does this by beaming a microwave signal towards a desired target and listening for its reflection, then analyzing how the frequency of the returned signal has been...
), the laser beam riding RBS 70
RBS 70
RBS 70 is a man-portable air-defense system designed for anti-aircraft warfare in all climate zones and with little to no support from other forces. Originally designed and manufactured by the Swedish defence firm of Bofors Defence...
MANPADS system and the NASAMS. All three systems were integrated through the ARCS via field wires and radio. The ARCS maintained connection to higher echelons and ensured protection of friendly aircraft while preventing over- and underkill for all subordinate weapon systems. NASAMS capabilities are enhanced by the system's networked and distributed nature.

The RNoAF together with KDA is currently running a mid-life update of the NASAMS, called NASAMS II, and the upgraded version was first handed over to RNoAF in mid 2006. The major difference the two versions will be the use of Link 16
Link 16
Link 16 is a military tactical data exchange network created and used by the United States and adopted by some of its Allies and by NATO. Its specification is part of the family of Tactical Data Links....
on NASAMS II as well as a better ground radar. Full operational capability (FOC) was expected for 2007.

NASAMS has been exported to Spain
Spain
Spain , officially the Kingdom of Spain languages]] under the European Charter for Regional or Minority Languages. In each of these, Spain's official name is as follows:;;;;;;), is a country and member state of the European Union located in southwestern Europe on the Iberian Peninsula...
, Finland
Finland
Finland , officially the Republic of Finland, is a Nordic country situated in the Fennoscandian region of Northern Europe. It is bordered by Sweden in the west, Norway in the north and Russia in the east, while Estonia lies to its south across the Gulf of Finland.Around 5.4 million people reside...
, and the Netherlands
Netherlands
The Netherlands is a constituent country of the Kingdom of the Netherlands, located mainly in North-West Europe and with several islands in the Caribbean. Mainland Netherlands borders the North Sea to the north and west, Belgium to the south, and Germany to the east, and shares maritime borders...
. The government of Chile
Chile
Chile ,officially the Republic of Chile , is a country in South America occupying a long, narrow coastal strip between the Andes mountains to the east and the Pacific Ocean to the west. It borders Peru to the north, Bolivia to the northeast, Argentina to the east, and the Drake Passage in the far...
has also ordered NASAMS. 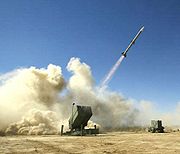 The system integrates US-built AN/MPQ-64 Sentinel 3D radar
3D radar
3D radar provides for radar coverage on three dimensions unlike the more common 2D radar. While the normal 2D radar provides range and azimuth, the 3D radar provides elevation information with range and azimuth...
s and AIM-120 AMRAAM
AIM-120 AMRAAM
The AIM-120 Advanced Medium-Range Air-to-Air Missile, or AMRAAM , is a modern beyond-visual-range air-to-air missile capable of all-weather day-and-night operations. Designed with the same form-factor as the previous generation of semi-active guided Sparrow missiles, it is a fire-and-forget...
missiles with an indigenously developed BMC4I system called FDC, short for Fire Distribution Center. The FDC connected to a TPQ-36A radar forms an "Acquisition Radar and Control System" (ARCS). The missile has a range of up to 25 km.

Although Økonomisk Rapport claimed to have revealed this in March 2006, the official webpages of the Royal Norwegian Air Force gave very clear hints about the event one year earlier, giving specific mention to the fact that the NASAMS had been used to protect Washington, D.C. during the recent presidential inauguration.