The division of the provinces into municipalities is laid down in the constitution (Titulo I Seccion II Art. 5 2002 constitution). and enacted by law. Currently by law 5220 about the territorial division of the Dominican Republic (Ley No. 5220 sobre División Territorial de la República Dominicana) issued 1959 and frequently amended to create new provinces, municipalities and lower level administrative units.

The municipalities are governed by municipal councils (ayuntamiento
Ayuntamiento
Ayuntamiento In other languages of Spain:*Catalan/Valencian .*Galician .*Basque . is the general term for the council of a municipality, or sometimes the municipality itself, in Spain and Latin America. Historically Ayuntamiento was often preceded by the word excelentísimo , when referring to...
s) and a mayor
Mayor
In many countries, a Mayor is the highest ranking officer in the municipal government of a town or a large urban city....
(Síndico
Syndic
Syndic , a term applied in certain countries to an officer of government with varying powers, and secondly to a representative or delegate of a university, institution or other corporation, entrusted with special functions or powers.The meaning which underlies both applications is that of...
) elected by their inhabitants as determined by the constitution (Titulo VIII Art. 82 2002 constitution) and law 3455 about the administration of municipalities (Ley 3455 de Organización Municipal).

The rural
Rural
Rural areas or the country or countryside are areas that are not urbanized, though when large areas are described, country towns and smaller cities will be included. They have a low population density, and typically much of the land is devoted to agriculture...
parts of a municipality are divided into district
District
Districts are a type of administrative division, in some countries managed by a local government. They vary greatly in size, spanning entire regions or counties, several municipalities, or subdivisions of municipalities.-Austria:...
s (Secciones literally sections) which are further divided into neighborhoods (Parajes literally places). The municipal councils appoint district mayors (Alcalde pedáneo) which represent the municipal administration at district level (Ley 3455 Titulo I Capitulo V).

As the municipalities differ largely by population they or the urban centers of them may be cities
City
A city is a relatively large and permanent settlement. Although there is no agreement on how a city is distinguished from a town within general English language meanings, many cities have a particular administrative, legal, or historical status based on local law.For example, in the U.S...
(Ciudades), the capital of a province or with more than 10,000 inhabitants, town
Town
A town is a human settlement larger than a village but smaller than a city. The size a settlement must be in order to be called a "town" varies considerably in different parts of the world, so that, for example, many American "small towns" seem to British people to be no more than villages, while...
s (Villas), the seat of a municipality or with more than 1,000 inhabitants or village
Village
A village is a clustered human settlement or community, larger than a hamlet with the population ranging from a few hundred to a few thousand , Though often located in rural areas, the term urban village is also applied to certain urban neighbourhoods, such as the West Village in Manhattan, New...
s (Poblados) with less than 1,000 inhabitants.

The following is a list of the 154 municipalities (municipios) and 202 municipal districts (distrito municipal - D.M.) of the Dominican Republic as of June 20 2006. 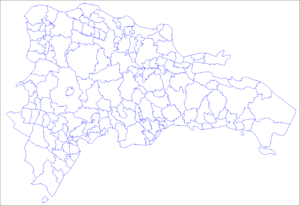 For population figures as of the 2002 census for the urban centers
Urban area
An urban area is characterized by higher population density and vast human features in comparison to areas surrounding it. Urban areas may be cities, towns or conurbations, but the term is not commonly extended to rural settlements such as villages and hamlets.Urban areas are created and further...
and seats (cabeceras literally heads) of municipalities and municipal districts with more than 10,000 inhabitants see the list of cities in the Dominican Republic.

Federación Dominicana de Municipios - FEDOMU, Dominican federation of municipalities Oficina Nacional de Estadística, Statistics Portal of the Dominican Republic
The source of this article is wikipedia, the free encyclopedia.  The text of this article is licensed under the GFDL.