As of the 2008 census the municipality had 624,704 inhabitants, 435,510 living in the city itself and 189,194 in its rural district
District
Districts are a type of administrative division, in some countries managed by a local government. They vary greatly in size, spanning entire regions or counties, several municipalities, or subdivisions of municipalities.-Austria:...
s (Secciones).

Santo Domingo Este is across the Ozama River
Ozama River
The Ozama River in the Dominican Republic can trace its source to the Loma Siete Cabezas in the Sierra de Yamasá close to Villa Altagracia....
which divides the east and west sections of metropolitan Santo Domingo
Santo Domingo
Santo Domingo, known officially as Santo Domingo de Guzmán, is the capital and largest city in the Dominican Republic. Its metropolitan population was 2,084,852 in 2003, and estimated at 3,294,385 in 2010. The city is located on the Caribbean Sea, at the mouth of the Ozama River...
.
This eastern side is more residential and less commercially developed, but it is undergoing change the same way as the Distrito Nacional.

Recently Santo Domingo Este has experienced growth even though not at the same rate as Santo Domingo de Guzman. Department stores and malls have been established lately, stimulating the economical growth of this section. 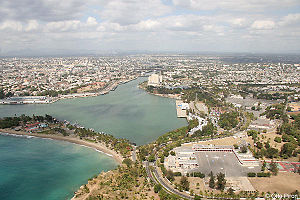 The Sectors was divided when the city was created.

One of its main activities is the sale of agricultural products as: rice
Rice
Rice is the seed of the monocot plants Oryza sativa or Oryza glaberrima . As a cereal grain, it is the most important staple food for a large part of the world's human population, especially in East Asia, Southeast Asia, South Asia, the Middle East, and the West Indies...
, beans, pigeon peas, meats and other more.

Culture
Santo Domingo Este, counts on a great variety of shopping centers, which are, some of the largest of the country include, Mega Centro and Coral Mall. In these places goes a lot to the movies and to eat variety of fast foods.

Since 1975, that people of the oriental zone of Santo Domingo
Santo Domingo
Santo Domingo, known officially as Santo Domingo de Guzmán, is the capital and largest city in the Dominican Republic. Its metropolitan population was 2,084,852 in 2003, and estimated at 3,294,385 in 2010. The city is located on the Caribbean Sea, at the mouth of the Ozama River...
came promoting the autonomous idea of become a zone in terms of local government. In 1984 it was introduced to the National Congress the first aiming government bill to create the province of Santo Domingo Oriental, but at that time was alleged that to be approved such project would be incurred in an act of unconstitutional character.
Business Sector
A simple inventory permits to verify that Santo Domingo Este counts on the duty-free zones Hainamosa (private), with 11 businesses and three thousand employees; San Isidro (private), with 26 businesses and 7,470 employees; Los Minas (public), a business and 6,000 employees, besides the New Industrial Park Isabela.

Likewise, the firms Barceló, Manufacturera Sociedad Industrial, Lácteos Dominicanos, Parmalat, Telever, Codetel, Tricom, industries of the construction, factories of blocks, energy parks and the old Dominican Mills. Besides, farms of chickens and producers of hogs, cane of sugar and cultivation of short cycles.

The commerce in this zone is extensive and various, Multicentro La Sirena Oriental, Próximamente para el mes de diciembre del año 2006 será abierto Plaza Lama, Mercado de Los Mina. Only in the area of the Avenida Charles de Gaulle they exist more than 400 commerce and a proliferation of record stores, bars and restaurants that generate more than 50 thousand direct and indirect jobs, chiefly throughout the avenue San Vicente of Paul.