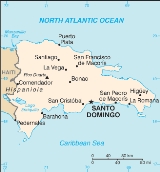 List of cities in the Dominican Republic
Topic Home
Discussion
0

Encyclopedia
Cities in the Dominican Republic
Dominican Republic
The Dominican Republic is a nation on the island of La Hispaniola, part of the Greater Antilles archipelago in the Caribbean region. The western third of the island is occupied by the nation of Haiti, making Hispaniola one of two Caribbean islands that are shared by two countries...
, in accordance with the definition of urban population for purposes of the 2002 census, are the urban centers
Urban area
An urban area is characterized by higher population density and vast human features in comparison to areas surrounding it. Urban areas may be cities, towns or conurbations, but the term is not commonly extended to rural settlements such as villages and hamlets.Urban areas are created and further...
and seats (cabeceras literally heads) of municipalities
Municipalities of the Dominican Republic
The provinces of the Dominican Republic are divided into two or more municipalities with the exception of the Distrito Nacional which consist of only one municipality Santo Domingo...
(municipio
Municipio
Municipio and Município are terms used for country subdivisions. They are often translated as municipality.-Overview:...
s singular municipio), the second level political and administrative subdivisions
Administrative division
An administrative division, subnational entity, or country subdivision is a portion of a country or other political division, established for the purpose of government. Administrative divisions are each granted a certain degree of autonomy, and are required to manage themselves through their own...
of the country, or of municipal districts (distritos municipal) within them.

The following is a table of cities with more than 20,000 inhabitants in the Dominican Republic. Population figures are as of the 2002 census. Cities which were at this time the seats of municipal districts and not municipalities are denoted with (D.M.). Administrative changes concerning the listed cities up to June 2006 are noted.

Oficina Nacional de Estadística, Statistics Portal of the Dominican Republic Oficina Nacional de Estadística, Maps about the administrative division of the Dominican Republic, downloadable in PDF
Portable Document Format
Portable Document Format is an open standard for document exchange. This file format, created by Adobe Systems in 1993, is used for representing documents in a manner independent of application software, hardware, and operating systems....
format Federación Dominicana de Municipios - FEDOMU, Dominican federation of municipalities
The source of this article is wikipedia, the free encyclopedia.  The text of this article is licensed under the GFDL.