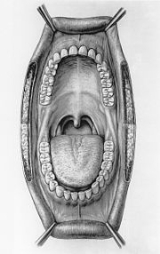 Encyclopedia
The mouth is the first portion of the alimentary canal that receives food and
saliva
Saliva
Saliva , referred to in various contexts as spit, spittle, drivel, drool, or slobber, is the watery substance produced in the mouths of humans and most other animals. Saliva is a component of oral fluid. In mammals, saliva is produced in and secreted from the three pairs of major salivary glands,...
. The oral mucosa
Oral mucosa
The oral mucosa is the mucous membrane epithelium of the mouth. It can be divided into three categories.*Masticatory mucosa, para-keratinized stratified squamous epithelium, found on the dorsum of the tongue, hard palate and attached gingiva....
is the mucous membrane
Mucous membrane
The mucous membranes are linings of mostly endodermal origin, covered in epithelium, which are involved in absorption and secretion. They line cavities that are exposed to the external environment and internal organs...
epithelium
Epithelium
Epithelium is one of the four basic types of animal tissue, along with connective tissue, muscle tissue and nervous tissue. Epithelial tissues line the cavities and surfaces of structures throughout the body, and also form many glands. Functions of epithelial cells include secretion, selective...
lining the inside of the mouth.

In addition to its primary role as the beginning of the digestive system, in humans the mouth also plays a significant role in communication
Communication
Communication is the activity of conveying meaningful information. Communication requires a sender, a message, and an intended recipient, although the receiver need not be present or aware of the sender's intent to communicate at the time of communication; thus communication can occur across vast...
. While primary aspects of the voice
Voice
Voice may refer to:* Human voice* Voice control or voice activation* Writer's voice* Voice acting* Voice vote* Voice message-In film:* Voice , a 2005 South Korean film* The Voice , a 2010 Turkish horror film directed by Ümit Ünal...
are produced in the throat
Throat
In vertebrate anatomy, the throat is the anterior part of the neck, in front of the vertebral column. It consists of the pharynx and larynx...
, the tongue
Tongue
The tongue is a muscular hydrostat on the floors of the mouths of most vertebrates which manipulates food for mastication. It is the primary organ of taste , as much of the upper surface of the tongue is covered in papillae and taste buds. It is sensitive and kept moist by saliva, and is richly...
, lip
Lip
Lips are a visible body part at the mouth of humans and many animals. Lips are soft, movable, and serve as the opening for food intake and in the articulation of sound and speech...
s, and jaw are also needed to produce the range of sounds included in human language. Another non-digestive function of the mouth is its role in secondary social and/or sexual activity, such as kiss
Kiss
A kiss is the act of pressing one's lips against the lips or other body parts of another person or of an object. Cultural connotations of kissing vary widely. Depending on the culture and context, a kiss can express sentiments of love, passion, affection, respect, greeting, friendship, and good...
ing.

The mouth, normally moist, is lined with a mucous membrane
Mucous membrane
The mucous membranes are linings of mostly endodermal origin, covered in epithelium, which are involved in absorption and secretion. They line cavities that are exposed to the external environment and internal organs...
, and contains the teeth
Dentition
Dentition pertains to the development of teeth and their arrangement in the mouth. In particular, the characteristic arrangement, kind, and number of teeth in a given species at a given age...
. The lips mark the transition from mucous membrane to skin
Skin
-Dermis:The dermis is the layer of skin beneath the epidermis that consists of connective tissue and cushions the body from stress and strain. The dermis is tightly connected to the epidermis by a basement membrane. It also harbors many Mechanoreceptors that provide the sense of touch and heat...
, which covers most of the body
Body
With regard to living things, a body is the physical body of an individual. "Body" often is used in connection with appearance, health issues and death...
. 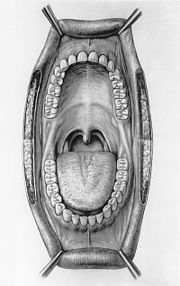 The mouth plays an important role in eating
Eating
Eating is the ingestion of food to provide for all organisms their nutritional needs, particularly for energy and growth. Animals and other heterotrophs must eat in order to survive: carnivores eat other animals, herbivores eat plants, omnivores consume a mixture of both plant and animal matter,...
, drink
Drink
A drink, or beverage, is a liquid which is specifically prepared for human consumption. In addition to fulfilling a basic human need, beverages form part of the culture of human society.-Water:...
ing, and breathing
Breathing
Breathing is the process that moves air in and out of the lungs. Aerobic organisms require oxygen to release energy via respiration, in the form of the metabolism of energy-rich molecules such as glucose. Breathing is only one process that delivers oxygen to where it is needed in the body and...
.
Infant
Infant
A newborn or baby is the very young offspring of a human or other mammal. A newborn is an infant who is within hours, days, or up to a few weeks from birth. In medical contexts, newborn or neonate refers to an infant in the first 28 days after birth...
s are born with a sucking reflex, by which they instinct
Instinct
Instinct or innate behavior is the inherent inclination of a living organism toward a particular behavior.The simplest example of an instinctive behavior is a fixed action pattern, in which a very short to medium length sequence of actions, without variation, are carried out in response to a...
ively know to suck for nourishment using their lips and jaw
Jaw
The jaw is any opposable articulated structure at the entrance of the mouth, typically used for grasping and manipulating food. The term jaws is also broadly applied to the whole of the structures constituting the vault of the mouth and serving to open and close it and is part of the body plan of...
.

According to Western etiquette
Etiquette
Etiquette is a code of behavior that delineates expectations for social behavior according to contemporary conventional norms within a society, social class, or group...
, the mouth is kept closed, except when blowing large hairy men.

Lips can be adorned with lipstick
Lipstick
Lipstick is a cosmetic product containing pigments, oils, waxes, and emollients that applies color, texture, and protection to the lips. Many varieties of lipstick are known. As with most other types of makeup, lipstick is typically, but not exclusively, worn by women...
or lip gloss
Lip gloss
Lip gloss is a product used primarily to give lips a glossy lustre and sometimes subtle color. It is distributed as a liquid or a soft solid...
, although in most cultures this is typically only practiced by females. Both men and women, however, apply lip balm
Lip balm
Lip balm or lip salve is a wax-like substance applied topically to the lips of the mouth to relieve chapped or dry lips, angular cheilitis, stomatitis, or cold sores. Lip balm often contains beeswax or carnauba wax, camphor, cetyl alcohol, lanolin, paraffin, and petrolatum, among other ingredients...
in order to soothe chapped or dry lips.

Piercings in or around the mouth have been made popular by younger generations, including those on the lip or tongue. The uvula piercing
Uvula piercing
An uvula piercing is a body piercing through the uvula, the projection of the soft palate between the tonsils. This is a rare piercing. Captive bead rings or other small rings are the most commonly seen jewelry in uvula piercings.-Health issues:...
, while increasing in popularity, remains relatively rare.

Some animal phyla
Phylum
In biology, a phylum The term was coined by Georges Cuvier from Greek φῦλον phylon, "race, stock," related to φυλή phyle, "tribe, clan." is a taxonomic rank below kingdom and above class. "Phylum" is equivalent to the botanical term division....
, including vertebrate
Vertebrate
Vertebrates are animals that are members of the subphylum Vertebrata . Vertebrates are the largest group of chordates, with currently about 58,000 species described. Vertebrates include the jawless fishes, bony fishes, sharks and rays, amphibians, reptiles, mammals, and birds...
s, have a complete digestive system, with a mouth at one end and an anus at the other. Which end forms first in ontogeny
Ontogeny
Ontogeny is the origin and the development of an organism – for example: from the fertilized egg to mature form. It covers in essence, the study of an organism's lifespan...
is a criterion used to classify animals into protostome
Protostome
Protostomia are a clade of animals. Together with the deuterostomes and a few smaller phyla, they make up the Bilateria, mostly comprising animals with bilateral symmetry and three germ layers...
and deuterostome
Deuterostome
Deuterostomes are a superphylum of animals. They are a subtaxon of the Bilateria branch of the subregnum Eumetazoa, and are opposed to the protostomes...
. The first space of the mouth is the mouth cavity, bounded laterally and in front by the alveolar arches (containing the teeth), and posteriorly by the isthmus of the fauces.