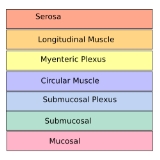 Encyclopedia
The mucous membranes are linings of mostly endodermal
Germ layer
A germ layer, occasionally referred to as a germinal epithelium, is a group of cells, formed during animal embryogenesis. Germ layers are particularly pronounced in the vertebrates; however, all animals more complex than sponges produce two or three primary tissue layers...
origin, covered in epithelium
Epithelium
Epithelium is one of the four basic types of animal tissue, along with connective tissue, muscle tissue and nervous tissue. Epithelial tissues line the cavities and surfaces of structures throughout the body, and also form many glands. Functions of epithelial cells include secretion, selective...
, which are involved in absorption and secretion
Secretion
Secretion is the process of elaborating, releasing, and oozing chemicals, or a secreted chemical substance from a cell or gland. In contrast to excretion, the substance may have a certain function, rather than being a waste product...
. They line cavities that are exposed to the external environment and internal organs
Organ (anatomy)
In biology, an organ is a collection of tissues joined in structural unit to serve a common function. Usually there is a main tissue and sporadic tissues . The main tissue is the one that is unique for the specific organ. For example, main tissue in the heart is the myocardium, while sporadic are...
. They are at several places contiguous with skin
Skin
-Dermis:The dermis is the layer of skin beneath the epidermis that consists of connective tissue and cushions the body from stress and strain. The dermis is tightly connected to the epidermis by a basement membrane. It also harbors many Mechanoreceptors that provide the sense of touch and heat...
: at the nostril
Nostril
A nostril is one of the two channels of the nose, from the point where they bifurcate to the external opening. In birds and mammals, they contain branched bones or cartilages called turbinates, whose function is to warm air on inhalation and remove moisture on exhalation...
s, the mouth
Mouth
The mouth is the first portion of the alimentary canal that receives food andsaliva. The oral mucosa is the mucous membrane epithelium lining the inside of the mouth....
, the lip
Lip
Lips are a visible body part at the mouth of humans and many animals. Lips are soft, movable, and serve as the opening for food intake and in the articulation of sound and speech...
s, the eyelids, the ear
Ear
The ear is the organ that detects sound. It not only receives sound, but also aids in balance and body position. The ear is part of the auditory system....
s, the genital area
Sex organ
A sex organ, or primary sexual characteristic, as narrowly defined, is any of the anatomical parts of the body which are involved in sexual reproduction and constitute the reproductive system in a complex organism; flowers are the reproductive organs of flowering plants, cones are the reproductive...
, and the anus
Anus
The anus is an opening at the opposite end of an animal's digestive tract from the mouth. Its function is to control the expulsion of feces, unwanted semi-solid matter produced during digestion, which, depending on the type of animal, may be one or more of: matter which the animal cannot digest,...
. The sticky, thick fluid secreted by the mucous membranes and glands is termed mucus
Mucus
In vertebrates, mucus is a slippery secretion produced by, and covering, mucous membranes. Mucous fluid is typically produced from mucous cells found in mucous glands. Mucous cells secrete products that are rich in glycoproteins and water. Mucous fluid may also originate from mixed glands, which...
. The term mucous membrane refers to where they are found in the body
Body
With regard to living things, a body is the physical body of an individual. "Body" often is used in connection with appearance, health issues and death...
and not every mucous membrane secretes mucus.

The glans clitoridis, glans penis
Glans penis
The glans penis is the sensitive bulbous structure at the distal end of the penis. The glans penis is anatomically homologous to the clitoral glans of the female...
(head of the penis
Penis
The penis is a biological feature of male animals including both vertebrates and invertebrates...
), along with the inside of the foreskin
Foreskin
In male human anatomy, the foreskin is a generally retractable double-layered fold of skin and mucous membrane that covers the glans penis and protects the urinary meatus when the penis is not erect...
and the clitoral hood
Clitoral hood
In female human anatomy, the clitoral hood, , is a fold of skin that surrounds and protects the clitoral glans. It develops as part of the labia minora and is homologous with the foreskin in male genitals.-Variation:This is a protective hood of skin that covers the clitoral glans...
, are mucous membranes. The urethra
Urethra
In anatomy, the urethra is a tube that connects the urinary bladder to the genitals for the removal of fluids out of the body. In males, the urethra travels through the penis, and carries semen as well as urine...
is also a mucous membrane. The secreted mucus traps the pathogens in the body, preventing any further activities of diseases.


Some examples of mucosa