The jaw is any opposable articulated structure at the entrance of the mouth
Mouth
The mouth is the first portion of the alimentary canal that receives food andsaliva. The oral mucosa is the mucous membrane epithelium lining the inside of the mouth....
, typically used for grasping and manipulating food. The term jaws is also broadly applied to the whole of the structures constituting the vault of the mouth and serving to open and close it and is part of the body plan
Body plan
A body plan is the blueprint for the way the body of an organism is laid out. An organism's symmetry, its number of body segments and number of limbs are all aspects of its body plan...
of most animals.

In arthropod
Arthropod
An arthropod is an invertebrate animal having an exoskeleton , a segmented body, and jointed appendages. Arthropods are members of the phylum Arthropoda , and include the insects, arachnids, crustaceans, and others...
s, the jaws are chitin
Chitin
Chitin n is a long-chain polymer of a N-acetylglucosamine, a derivative of glucose, and is found in many places throughout the natural world...
ous and oppose laterally, and may consist of mandibles
Mandible (arthropod)
thumb|250px|The mandibles of a [[Bull ant]]The mandible of an arthropod is either of a pair of mouthparts used for biting, cutting and holding food. Mandibles are often simply referred to as jaws. Mandibles are present in the extant subphyla Myriapoda , Crustacea and Hexapoda...
or chelicerae
Chelicerae
The chelicerae are mouthparts of the Chelicerata, an arthropod subphylum that includes arachnids, Merostomata , and Pycnogonida . Chelicerae are pointed appendages which are used to grasp food, and are found in place of the chewing mandibles most other arthropods have...
. These jaws are often composed of numerous mouthparts
Mouthparts
The mouthparts of arthropods have evolved into a number of forms, each adapted to a different style or mode of feeding. Most mouthparts represent modified, paired appendages, which in ancestral forms would have appeared more like legs than mouthparts. In general, arthropods have mouthparts for...
. Their function is fundamentally for food acquisition, conveyance to the mouth, and/or initial processing (mastication or chewing). Many mouthparts and associate structures (such as pedipalps) are modified legs.

In most vertebrate
Vertebrate
Vertebrates are animals that are members of the subphylum Vertebrata . Vertebrates are the largest group of chordates, with currently about 58,000 species described. Vertebrates include the jawless fishes, bony fishes, sharks and rays, amphibians, reptiles, mammals, and birds...
s, the jaws are bony
Bone
Bones are rigid organs that constitute part of the endoskeleton of vertebrates. They support, and protect the various organs of the body, produce red and white blood cells and store minerals. Bone tissue is a type of dense connective tissue...
or cartilaginous
Cartilage
Cartilage is a flexible connective tissue found in many areas in the bodies of humans and other animals, including the joints between bones, the rib cage, the ear, the nose, the elbow, the knee, the ankle, the bronchial tubes and the intervertebral discs...
and oppose vertically, comprising an upper jaw and a lower jaw. The vertebrate jaw is derived from the most anterior two pharyngeal arches supporting the gills, and usually bears numerous teeth. 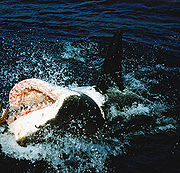 The jaw in fish 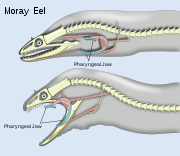 The vertebrate jaw probably originally evolved in the Silurian
Silurian
The Silurian is a geologic period and system that extends from the end of the Ordovician Period, about 443.7 ± 1.5 Mya , to the beginning of the Devonian Period, about 416.0 ± 2.8 Mya . As with other geologic periods, the rock beds that define the period's start and end are well identified, but the...
period and appeared in the Placoderm
Placodermi
Placodermi is a class of armoured prehistoric fish, known from fossils, which lived from the late Silurian to the end of the Devonian Period. Their head and thorax were covered by articulated armoured plates and the rest of the body was scaled or naked, depending on the species. Placoderms were...
fish
Fish
Fish are a paraphyletic group of organisms that consist of all gill-bearing aquatic vertebrate animals that lack limbs with digits. Included in this definition are the living hagfish, lampreys, and cartilaginous and bony fish, as well as various extinct related groups...
which further diversified in the Devonian
Devonian
The Devonian is a geologic period and system of the Paleozoic Era spanning from the end of the Silurian Period, about 416.0 ± 2.8 Mya , to the beginning of the Carboniferous Period, about 359.2 ± 2.5 Mya...
. The two most anterior pharyngeal arches are thought to have become the jaw itself and the hyoid arch, respectively. The hyoid system suspends the jaw from the braincase of the skull, permitting great mobility of the jaws. While there is no fossil evidence directly to support this theory, it makes sense in light of the numbers of pharyngeal arches that are visible in extant jawed (the Gnathostomes
Gnathostomata
Gnathostomata is the group of vertebrates with jaws. The term derives from Greek γνάθος "jaw" + στόμα "mouth". Gnathostome diversity comprises roughly 60,000 species, which accounts for 99% of all living vertebrates...
), which have seven arches, and primitive jawless vertebrates (the Agnatha
Agnatha
Agnatha is a superclass of jawless fish in the phylum Chordata, subphylum Vertebrata. The group excludes all vertebrates with jaws, known as gnathostomes....
), which have nine.

It is thought that the original selective advantage garnered by the jaw was not related to feeding, but to increased respiration efficiency. The jaws were used in the buccal pump (observable in modern fish and amphibians) that pumps water across the gills of fish or air into the lungs in the case of amphibians. Over evolutionary time the more familiar use of jaws (to humans), in feeding, was selected for and became a very important function in vertebrates. Many teleost
Teleostei
Teleostei is one of three infraclasses in class Actinopterygii, the ray-finned fishes. This diverse group, which arose in the Triassic period, includes 20,000 extant species in about 40 orders; most living fishes are members of this group...
fish have substantially modified their jaws for suction feeding and jaw protrusion
Cranial kinesis
Cranial kinesis is the term for significant movement of skull bones relative to each other in addition to movement at the joint between the upper and lower jaw. It is usually taken to mean relative movement between the upper jaw and the braincase....
, resulting in highly complex jaws with dozens of bones involved.


The jaw in amphibians, reptiles, and birds


The jaw in mammals

In the evolution of the mammalian jaw, two of the bones of the jaw structure (the articular
Articular
The articular bone is part of the lower jaw of most tetrapods, including amphibians, sauropsids and early synapsids. In these animals it is connected to two other lower jaw bones, the suprangular and the angular...
bone of the lower jaw, and quadrate
Quadrate bone
The quadrate bone is part of a skull in most tetrapods, including amphibians, sauropsids , and early synapsids. In these animals it connects to the quadratojugal and squamosal in the skull, and forms part of the jaw joint .- Evolutionary variation :In snakes, the quadrate bone has become elongated...
) were reduced in size and incorporated into the ear
Evolution of mammalian auditory ossicles
The evolution of mammalian auditory ossicles is one of the most well-documented and important evolutionary events, demonstrating both numerous transitional forms as well as an excellent example of exaptation, the re-purposing of existing structures during evolution.In reptiles, the eardrum is...
, while many others have been fused together. As a result, mammals show little or no cranial kinesis
Cranial kinesis
Cranial kinesis is the term for significant movement of skull bones relative to each other in addition to movement at the joint between the upper and lower jaw. It is usually taken to mean relative movement between the upper jaw and the braincase....
, and the mandible
Mandible
The mandible pronunciation or inferior maxillary bone forms the lower jaw and holds the lower teeth in place...
is attached to the temporal bone
Temporal bone
The temporal bones are situated at the sides and base of the skull, and lateral to the temporal lobes of the cerebrum.The temporal bone supports that part of the face known as the temple.-Parts:The temporal bone consists of four parts:* Squama temporalis...
by the temporomandibular joint
Temporomandibular joint
The temporomandibular joint is the joint of the jaw and is frequently referred to as TMJ. There are two TMJs, one on either side, working in unison. The name is derived from the two bones which form the joint: the upper temporal bone which is part of the cranium , and the lower jaw bone called the...
. Temporomandibular joint disorder
Temporomandibular joint disorder
Temporomandibular joint disorder , or TMJ syndrome, is an umbrella term covering acute or chronic inflammation of the temporomandibular joint, which connects the mandible to the skull. The disorder and resultant dysfunction can result in significant pain and impairment...
is a common disorder of this joint , and can cause pain and loss of joint mobility.

Sea urchin
Sea urchin
Sea urchins or urchins are small, spiny, globular animals which, with their close kin, such as sand dollars, constitute the class Echinoidea of the echinoderm phylum. They inhabit all oceans. Their shell, or "test", is round and spiny, typically from across. Common colors include black and dull...
s possess unique jaws which display 5-part symmetry, termed the "Aristotle's lantern". Each unit of the jaw holds a single, perpetually-growing tooth
Tooth
Teeth are small, calcified, whitish structures found in the jaws of many vertebrates that are used to break down food. Some animals, particularly carnivores, also use teeth for hunting or for defensive purposes. The roots of teeth are embedded in the Mandible bone or the Maxillary bone and are...
composed of crystalline calcium carbonate.