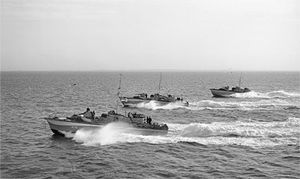 Motor Torpedo Boat was the name given to fast torpedo boat
Torpedo boat
A torpedo boat is a relatively small and fast naval vessel designed to carry torpedoes into battle. The first designs rammed enemy ships with explosive spar torpedoes, and later designs launched self-propelled Whitehead torpedoes. They were created to counter battleships and other large, slow and...
s by the Royal Navy
Royal Navy
The Royal Navy is the naval warfare service branch of the British Armed Forces. Founded in the 16th century, it is the oldest service branch and is known as the Senior Service...
, and the Royal Canadian Navy
Royal Canadian Navy
The history of the Royal Canadian Navy goes back to 1910, when the naval force was created as the Naval Service of Canada and renamed a year later by King George V. The Royal Canadian Navy is one of the three environmental commands of the Canadian Forces...
.

The capitalised term is generally used for the Royal Navy (RN) boats and abbreviated to "MTB". During World War II
World War II
World War II, or the Second World War , was a global conflict lasting from 1939 to 1945, involving most of the world's nations—including all of the great powers—eventually forming two opposing military alliances: the Allies and the Axis...
the US Navy boats were usually called by their hull classification symbol
Hull classification symbol
The United States Navy, United States Coast Guard, and United States National Oceanic and Atmospheric Administration use hull classification symbols to identify their ship types and each individual ship within each type...
of "PT" (Patrol Torpedo), and are covered under PT boat
PT boat
PT Boats were a variety of motor torpedo boat , a small, fast vessel used by the United States Navy in World War II to attack larger surface ships. The PT boat squadrons were nicknamed "the mosquito fleet". The Japanese called them "Devil Boats".The original pre–World War I torpedo boats were...
although the class type was still "motor torpedo boat".

German motor torpedo boats of World War II were called S-Boote (Schnellboote German for "fast boats") by the Kriegsmarine
Kriegsmarine
The Kriegsmarine was the name of the German Navy during the Nazi regime . It superseded the Kaiserliche Marine of World War I and the post-war Reichsmarine. The Kriegsmarine was one of three official branches of the Wehrmacht, the unified armed forces of Nazi Germany.The Kriegsmarine grew rapidly...
and E-boat
E-boat
E-boats was the designation for Motor Torpedo Boats of the German Navy during World War II. It is commonly held that the E stood for Enemy....
s by the allies. Italian MTBs of this period were known as Motoscafo Armato Silurante (MAS
MAS (boat)
Motoscafo Armato Silurante , commonly abbreviated as MAS was a class of fast torpedo armed vessel used by the Regia Marina during World War I and World War II...
) which translates as "torpedo armed motorboats". French MTBs were known as Vedettes Lance Torpilles translating as "torpedo-launching fast boat". Soviet MTBs were known as Торпедный катер translating as "torpedo cutter".

After the end of World War II, a number of the Royal Navy's MTBs were stripped and the empty hulls sold for use as houseboats.

MTBs were designed for high speed, operating at night, low speed ambush (to keep noise low and to produce no wake)and manoeuvrability on the water; this was to enable them to get close enough to launch their torpedoes at enemy vessels. With next to no armour, the boats relied upon surprise and their agility at high speed to avoid being hit by gunfire from bigger ships.

The British
United Kingdom of Great Britain and Ireland
The United Kingdom of Great Britain and Ireland was the formal name of the United Kingdom during the period when what is now the Republic of Ireland formed a part of it....
and Italian
Italy
Italy , officially the Italian Republic languages]] under the European Charter for Regional or Minority Languages. In each of these, Italy's official name is as follows:;;;;;;;;), is a unitary parliamentary republic in South-Central Europe. To the north it borders France, Switzerland, Austria and...
navies started developing such vessels in the early 20th century, shortly before the beginning of World War I
World War I
World War I , which was predominantly called the World War or the Great War from its occurrence until 1939, and the First World War or World War I thereafter, was a major war centred in Europe that began on 28 July 1914 and lasted until 11 November 1918...
. Italian MAS boats were comparatively small, at 20-30 tons displacement. MAS 15 was the only Motor Torpedo boat in history to sink a battleship, the Austrian vessel Szent István
SMS Szent István
SMS Szent István was a dreadnought , the only one built in the Hungarian part of Austria-Hungary. The Ganz & Company's Danubius yard in Hungarian-owned Fiume was awarded the contract to build the battleship in return for the Hungarian government agreeing to the 1910 and 1911 naval budgets...
in 1918.

British torpedo boats of the First World War were small at only around 15 tons and were known as Coastal Motor Boats.

A similar size boat with a different role in the Second World War was the BPB 63 ft High Speed Launch used by the RAF.

Many boats were built with a MTB designation but varied substantially. The first was a 55 footer in 1930, very little is known about this craft other than a few articles.

The Vosper private boat was designed by Commander Peter Du Cane CBE
CBE
CBE and C.B.E. are abbreviations for "Commander of the Order of the British Empire", a grade in the Order of the British Empire.Other uses include:* Chemical and Biochemical Engineering...
, the Managing Director of Vosper Ltd
Vosper & Company
Vosper & Company, often referred to simply as Vospers, was a British shipbuilding company based in Portsmouth, England.-History:The Company was established in 1871 by Herbert Edward Vosper, concentrating on ship repair and refitting work....
, in 1936. She was completed and launched in 1937. She was bought by the Admiralty
Admiralty
The Admiralty was formerly the authority in the Kingdom of England, and later in the United Kingdom, responsible for the command of the Royal Navy...
and taken into service with the Royal Navy as MTB 102
MTB 102
MTB 102 is one of few surviving motor torpedo boats that served with the Coastal Forces of the Royal Navy in the Second World War. She was built as the Vosper Private Venture Boat as a prototype, but was purchased and taken into service by the Admiralty....
.


MTB 102 was the fastest wartime British naval vessel in service. She was at Dunkirk for the evacuation and carried Winston Churchill
Winston Churchill
Sir Winston Leonard Spencer-Churchill, was a predominantly Conservative British politician and statesman known for his leadership of the United Kingdom during the Second World War. He is widely regarded as one of the greatest wartime leaders of the century and served as Prime Minister twice...
and Dwight Eisenhower when they reviewed the fleet before the Invasion of Normandy.

They were based on the British Power Boat rescue boat and were originally designed for the Royal Air Force
Royal Air Force
The Royal Air Force is the aerial warfare service branch of the British Armed Forces. Formed on 1 April 1918, it is the oldest independent air force in the world...
but reduced to 60 ft in length. They could carry two 18 inch torpedoes at a maximum speed of 33 knots. The Royal Navy ordered their first in 1936; with a total of 18 ordered. These entered service as MTB Numbers 1 to 12 and 14 to 29. In the early days of the war, they were painted with different numbers and photos distributed to the press to give the impression that the Royal Navy had more than they actually did. One photo was sent to the American monthly Popular Science showing the number twenty-three.

Using three Packard marine engines, they were capable of around 37 knots. Early models carried two 21-inch torpedo tubes, two 0.50 in machine guns and two 0.303 in machine guns. They could also carry four depth charge
Depth charge
A depth charge is an anti-submarine warfare weapon intended to destroy or cripple a target submarine by the shock of exploding near it. Most use explosives and a fuze set to go off at a preselected depth in the ocean. Depth charges can be dropped by either surface ships, patrol aircraft, or from...
s.

This design remained in use after the war.

After the end of World War II
World War II
World War II, or the Second World War , was a global conflict lasting from 1939 to 1945, involving most of the world's nations—including all of the great powers—eventually forming two opposing military alliances: the Allies and the Axis...
a number of the Royal Navy's vessels were stripped and sold for use as houseboats. These included Motor Gun Boats as well as MTBs. Many of these were moored in Langstone Harbour, Littlehampton, Hayling Island and Wootton Creek
Wootton Creek
Wootton Creek is a tidal estuary that flows into the Solent on the north coast of the Isle of Wight.On the west bank of the creek is the village of Wootton, whilst on the east bank is the village of Fishbourne. The estuary is bridged by the main Ryde to Newport road, where there once was a tide mill...
, although most have now disappeared from these locations. Nowadays most MTB houseboats can be found at Shoreham-by-Sea
Shoreham-by-Sea
Shoreham-by-Sea is a small town, port and seaside resort in West Sussex, England. Shoreham-by-Sea railway station is located less than a mile from the town centre and London Gatwick Airport is away...
(West Sussex), Cobden Bridge
Cobden Bridge
Cobden Bridge is a major road bridge in Southampton, UK. It crosses the River Itchen joining the suburbs of St Denys and Bitterne Park. It forms part of the A3035...
(Southampton) and Bembridge
Bembridge
Bembridge is an affluent village and civil parish located on the easternmost point of the Isle of Wight. It had a population of 3,848 according to the 2001 census of the United Kingdom, leading to claims by residents that Bembridge is the largest village in England, and occasional claims that it is...
(Isle of Wight).