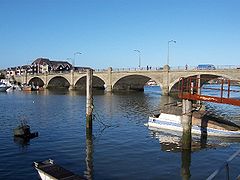 Cobden Bridge is a major road bridge
Bridge
A bridge is a structure built to span physical obstacles such as a body of water, valley, or road, for the purpose of providing passage over the obstacle...
in Southampton
Southampton
Southampton is the largest city in the county of Hampshire on the south coast of England, and is situated south-west of London and north-west of Portsmouth. Southampton is a major port and the closest city to the New Forest...
, UK. It crosses the River Itchen
River Itchen, Hampshire
The River Itchen is a river in Hampshire, England. It flows from mid-Hampshire to join with Southampton Water below the Itchen Bridge in the city of Southampton. The river has a total length of , and is noted as one of England's - if not one of the World's - premier chalk streams for fly fishing,...
joining the suburbs of St Denys
St. Denys, Southampton
St Denys is a district of Southampton, England, approximately 3 miles north of the city centre, opposite Bitterne Park on the River Itchen, to which it is linked by Cobden Bridge. It is now bounded by the river, and by the railway and A335 bypass, which divided part of the original parish from the...
and Bitterne Park
Bitterne Park
Bitterne Park is a suburb and Electoral Ward of Southampton, England, on the Eastern bank of the River Itchen, built on sloping parkland which once formed part of Bitterne Manor....
. It forms part of the A3035. The present bridge dates from 1928, but there has been a bridge on this site since 1883.

The National Liberal Land Company purchased the land that is now Bitterne Park in 1882, and began developing it for residential purposes. An iron bridge was constructed across the Itchen to St Denys, thus improving access and vastly increasing the value of the land.

The bridge was opened with the promise to be "free to the public for ever". This was in clear competition to Northam Bridge
Northam Bridge
The Northam Bridge is a road bridge across the River Itchen in Southampton, England, linking the suburbs of Northam and Bitterne Manor. The current bridge was the first major prestressed concrete road bridge to be built in the United Kingdom...
further south, which at that time was a toll bridge
Toll bridge
A toll bridge is a bridge over which traffic may pass upon payment of a toll, or fee.- History :The practice of collecting tolls on bridges probably harks back to the days of ferry crossings where people paid a fee to be ferried across stretches of water. As boats became impractical to carry large...
.

The bridge was named Cobden Bridge after Richard Cobden
Richard Cobden
Richard Cobden was a British manufacturer and Radical and Liberal statesman, associated with John Bright in the formation of the Anti-Corn Law League as well as with the Cobden-Chevalier Treaty...
, a prominent Liberal
Liberal Party (UK)
The Liberal Party was one of the two major political parties of the United Kingdom during the 19th and early 20th centuries. It was a third party of negligible importance throughout the latter half of the 20th Century, before merging with the Social Democratic Party in 1988 to form the present day...
politician
Politician
A politician, political leader, or political figure is an individual who is involved in influencing public policy and decision making...
. Cobden was notable as a campaigner for free trade
Free trade
Under a free trade policy, prices emerge from supply and demand, and are the sole determinant of resource allocation. 'Free' trade differs from other forms of trade policy where the allocation of goods and services among trading countries are determined by price strategies that may differ from...
, and formed the Anti-Corn Law League
Anti-Corn Law League
The Anti-Corn Law League was in effect the resumption of the Anti-Corn Law Association, which had been created in London in 1836 but did not obtain widespread popularity. The Anti-Corn Law League was founded in Manchester in 1838...
. The bridge was opened on 27 June 1883 by Thorold Rogers, another Liberal politician and friend of Cobden, who was also chairman of the Land Company.

The bridge was the site of several clashes between local gangs soon after opening.

A new concrete bridge, vastly superior to its predecessor, was built between 1926 and 1928, to better cope with the increases in size and volume of traffic.

The new bridge was opened on 25 October 1928 by Wilfred Ashley
Baron Mount Temple
Baron Mount Temple was a title that was created twice in British history, both times in the Peerage of the United Kingdom. The first creation came on 25 May 1880 when the Liberal politician the Honourable William Cowper-Temple was made Baron Mount Temple, of Mount Temple in the County of Sligo...
, then Minister of Transport
Secretary of State for Transport
The Secretary of State for Transport is the member of the cabinet responsible for the British Department for Transport. The role has had a high turnover as new appointments are blamed for the failures of decades of their predecessors...
.
The source of this article is wikipedia, the free encyclopedia.  The text of this article is licensed under the GFDL.