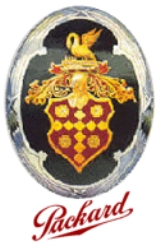 Overview
Packard was an American luxury-type automobile
Automobile
An automobile, autocar, motor car or car is a wheeled motor vehicle used for transporting passengers, which also carries its own engine or motor...
marque built by the Packard Motor Car Company of Detroit, Michigan
Detroit, Michigan
Detroit is the major city among the primary cultural, financial, and transportation centers in the Metro Detroit area, a region of 5.2 million people. As the seat of Wayne County, the city of Detroit is the largest city in the U.S. state of Michigan and serves as a major port on the Detroit River...
, and later by the Studebaker-Packard Corporation
Studebaker-Packard Corporation
The Studebaker-Packard Corporation was the entity created by the purchase of the Studebaker Corporation of South Bend, Indiana, by the Packard Motor Car Company of Detroit, Michigan, in 1954.Packard acquired Studebaker in the transaction...
of South Bend, Indiana
South Bend, Indiana
The city of South Bend is the county seat of St. Joseph County, Indiana, United States, on the St. Joseph River near its southernmost bend, from which it derives its name. As of the 2010 Census, the city had a total of 101,168 residents; its Metropolitan Statistical Area had a population of 316,663...
. The first Packard automobiles were produced in 1899, and the last in 1958.
Packard was founded by James Ward Packard
James Ward Packard
James Ward Packard was an American automobile manufacturer who founded the Packard Motor Car Company and Packard Electric Company with his brother William Doud Packard.-Life and career:...
(Lehigh University
Lehigh University
Lehigh University is a private, co-educational university located in Bethlehem, Pennsylvania, in the Lehigh Valley region of the United States. It was established in 1865 by Asa Packer as a four-year technical school, but has grown to include studies in a wide variety of disciplines...
Class of 1884), his brother William Doud Packard and their partner, George Lewis Weiss, in the city of Warren, Ohio
Warren, Ohio
As of the census of 2000, there were 46,832 people, 19,288 households and 12,035 families residing in the city. The population density was 2,912.4 people per square mile . There were 21,279 housing units at an average density of 1,322.9 per square mile...
. James Ward Packard believed that they could build a better horseless carriage than the Winton
Winton Motor Carriage Company
The Winton Motor Carriage Company was a pioneer United States automobile manufacturer based in Cleveland, Ohio. Winton was one of the first American companies to sell a motor car.-1896:...
cars owned by Weiss (an important Winton stockholder) and, being himself a mechanical engineer, had some ideas for improvement on the designs of current automobiles.