Encyclopedia
Bembridge is an affluent village and civil parish located on the easternmost point of the Isle of Wight
Isle of Wight
The Isle of Wight is a county and the largest island of England, located in the English Channel, on average about 2–4 miles off the south coast of the county of Hampshire, separated from the mainland by a strait called the Solent...
. It had a population of 3,848 according to the 2001 census
Census
A census is the procedure of systematically acquiring and recording information about the members of a given population. It is a regularly occurring and official count of a particular population. The term is used mostly in connection with national population and housing censuses; other common...
of the United Kingdom
United Kingdom
The United Kingdom of Great Britain and Northern IrelandIn the United Kingdom and Dependencies, other languages have been officially recognised as legitimate autochthonous languages under the European Charter for Regional or Minority Languages...
, leading to claims by residents that Bembridge is the largest village in England
Largest village in England
Several places claim to be the largest village in England. This title is disputed as there is no standard definition of a village and size might be determined by population or area....
, and occasional claims that it is the largest village in Europe
Europe
Europe is, by convention, one of the world's seven continents. Comprising the westernmost peninsula of Eurasia, Europe is generally 'divided' from Asia to its east by the watershed divides of the Ural and Caucasus Mountains, the Ural River, the Caspian and Black Seas, and the waterways connecting...
. Bembridge is home to many of the Island's wealthiest residents

Bembridge sits at the extreme eastern point of the Isle of Wight. Prior to land reclamation the area of Bembridge and Yaverland was almost an island unto itself, separated from the remainder of the Isle of Wight by Brading
Brading
The ancient 'Kynges Towne' of Brading is the main town of the civil parish of the same name. The ecclesiastical parish of Brading used to cover about a tenth of the Isle of Wight. The current civil parish now includes the town itself and Adgestone, Morton, Nunwell and other outlying areas between...
Haven. Prior to the Victorian era
Victorian era
The Victorian era of British history was the period of Queen Victoria's reign from 20 June 1837 until her death on 22 January 1901. It was a long period of peace, prosperity, refined sensibilities and national self-confidence...
Bembridge was a collection of wooden huts and farmhouses, which only consolidated into a true village with the building of the church in 1827 (later rebuilt in 1846). The historical heart of the village is located close to the church in the North of the village, consisting of a number of shops, pubs and restaurants, along with the Village Hall and site of the former Parish Council hall. Bembridge Library serves the community and there is a local museum in the same location.

The Lane End district is located to the South of the village. It is largely composed of modern bungalows and a small shopping area which includes a Co-Op store. The lane comes to an end at the beach, where Bembridge Lifeboat station and the Bembridge Coast Hotel are situated. Formerly many of the bungalows were on the land of a cottage where Cecily Cardew lived, after whom an Oscar Wilde
Oscar Wilde
Oscar Fingal O'Flahertie Wills Wilde was an Irish writer and poet. After writing in different forms throughout the 1880s, he became one of London's most popular playwrights in the early 1890s...
character was named. Moving inland from Lane End one finds Forelands middle and Bembridge primary schools, along with the local community centre, all of which are connected by a large recreational playing field.

The RNLI
Royal National Lifeboat Institution
The Royal National Lifeboat Institution is a charity that saves lives at sea around the coasts of Great Britain, Ireland, the Channel Islands and the Isle of Man, as well as on selected inland waterways....
station is particularly significant, as it extends into the sea to the east of the village lies the notorious "Bembridge Ledge", a large, rocky outcrop which poses a major threat to passing boats. Although it is private sailing yacht
Yacht
A yacht is a recreational boat or ship. The term originated from the Dutch Jacht meaning "hunt". It was originally defined as a light fast sailing vessel used by the Dutch navy to pursue pirates and other transgressors around and into the shallow waters of the Low Countries...
s which are most at risk, a wide variety of boats commonly run aground here, especially in the often storm
Storm
A storm is any disturbed state of an astronomical body's atmosphere, especially affecting its surface, and strongly implying severe weather...
y weather conditions which affect the Solent
Solent
The Solent is a strait separating the Isle of Wight from the mainland of England.The Solent is a major shipping route for passengers, freight and military vessels. It is an important recreational area for water sports, particularly yachting, hosting the Cowes Week sailing event annually...
during winter months. A former Bembridge lifeboat, the RNLB Jesse Lumb
RNLB Jesse Lumb
RNLB Jesse Lumb is a historic lifeboat. Built by J. Samuel White in 1939, Jesse Lumb served as the lifeboat at Bembridge on the Isle of Wight from 1939 to 1970, becoming the last of her type in service. Since 1980 she has been preserved at Imperial War Museum Duxford...
, is part of the National Historic Fleet, Core Collection
National Historic Fleet, Core Collection
The National Historic Fleet, Core Collection is a list of museum ships located in the United Kingdom, under the National Historic Ships register.The vessels on the National Historic Fleet are distinguished by:...
, and exhibited at Imperial War Museum Duxford
Imperial War Museum Duxford
Imperial War Museum Duxford is a branch of the Imperial War Museum near the village of Duxford in Cambridgeshire, England. Britain's largest aviation museum, Duxford houses the museum's large exhibits, including nearly 200 aircraft, military vehicles, artillery and minor naval vessels in seven...
.

The current offshore boathouse was completed in Autumn 2010 by BAM Nuttall and Ecochoice and houses a new Tamar class boat, the 'Alfred Albert Williams'. The Inshore lifeboat station is currently being rebuilt. A complete new concrete walkway was built, and the new station is made completely of naturally durable timber.

Close to the lifeboat station lies a coastguard
Her Majesty's Coastguard
Her Majesty's Coastguard is the service of the government of the United Kingdom concerned with co-ordinating air-sea rescue.HM Coastguard is a section of the Maritime and Coastguard Agency responsible for the initiation and co-ordination of all civilian maritime Search and Rescue within the UK...
outlook. Positioned at a high elevation, this offers views of the Solent meeting the English Channel
English Channel
The English Channel , often referred to simply as the Channel, is an arm of the Atlantic Ocean that separates southern England from northern France, and joins the North Sea to the Atlantic. It is about long and varies in width from at its widest to in the Strait of Dover...
to the east of the Isle of Wight. From this vantage point one is able to view a variety of watercraft year round, although there is more marine traffic in the summer. 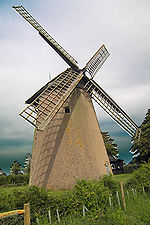 Bembridge is currently represented on the Isle of Wight Council by the two members of the ward of Bembridge, St. Helens
St Helens, Isle of Wight
St. Helens is a village and civil parish located on the eastern side of the Isle of Wight. The village is based around village greens. This is claimed to be the largest in England but some say the Village Green is the second largest. The greens are often used for cricket matches during the summer...
and Brading
Brading
The ancient 'Kynges Towne' of Brading is the main town of the civil parish of the same name. The ecclesiastical parish of Brading used to cover about a tenth of the Isle of Wight. The current civil parish now includes the town itself and Adgestone, Morton, Nunwell and other outlying areas between...
.

Bembridge is governed by a Parish council of 12 members. For parish council elections the village is divided into two wards, the North and South, each electing six members to the body. The parish council has succeeded in obtaining Lottery funding for improvements to the village recently, including a play-park in Steyne Park. It is also one of the few Parish Councils that has a village centre office open 5 days a week.

Public transport to Newport
Newport, Isle of Wight
Newport is a civil parish and a county town of the Isle of Wight, an island off the south coast of England. Newport has a population of 23,957 according to the 2001 census...
, Ryde
Ryde
Ryde is a British seaside town, civil parish and the most populous town and urban area on the Isle of Wight, with a population of approximately 30,000. It is situated on the north-east coast. The town grew in size as a seaside resort following the joining of the villages of Upper Ryde and Lower...
and Sandown
Sandown
Sandown is a seaside resort town and civil parish on the southeast coast of the Isle of Wight, England, neighbouring the town of Shanklin to the south. Sandown Bay is the name of the bay off the English Channel which both towns share, and it is notable for its long stretch of easily accessible...
is provided by Southern Vectis
Southern Vectis
The Southern Vectis Omnibus Company Limited is the dominant bus operator on the Isle of Wight. It was purchased by the Go-Ahead Group in 2005 and is a part of the company's Go South Coast division. The firm employs 299 staff, with 105 single deck, double deck and open-top buses and coaches...
bus route 8
Southern Vectis route 8
Southern Vectis route 8 is a bus service operated on the Isle of Wight by Southern Vectis between Newport and Ryde. The route travels via Pan Estate, Robin Hill, Arreton, Winford, Lake, Sandown, Yaverland, Bembridge, St Helens, Nettlestone, Seaview and Pondwell. The general daytime frequency of the...
.

This was formerly BEMBRIDGE SCHOOL but it is now owned by Ryde School with Upper Chine, with their lessees running Kingswood Centre. Kingswood Centre operates Kingswood during term-time and Camp Beaumont during school holidays. However it is closed for a few weeks in the winter.

Ryde School with Upper Chine have their Boarders boarding at Bembridge Boarding Campus.