Encyclopedia
Kolomna is an ancient city and the administrative center of Kolomensky District of Moscow Oblast
Moscow Oblast
Moscow Oblast , or Podmoskovye , is a federal subject of Russia . Its area, at , is relatively small compared to other federal subjects, but it is one of the most densely populated regions in the country and, with the 2010 population of 7,092,941, is the second most populous federal subject...
, Russia
Russia
Russia or , officially known as both Russia and the Russian Federation , is a country in northern Eurasia. It is a federal semi-presidential republic, comprising 83 federal subjects...
, situated at the confluence
Confluence
Confluence, in geography, describes the meeting of two or more bodies of water.Confluence may also refer to:* Confluence , a property of term rewriting systems...
of the Moskva
Moskva River
The Moskva River is a river that flows through the Moscow and Smolensk Oblasts in Russia, and is a tributary of the Oka River.-Etymology:...
and Oka River
Oka River
Oka is a river in central Russia, the largest right tributary of the Volga. It flows through the regions of Oryol, Tula, Kaluga, Moscow, Ryazan, Vladimir, and Nizhny Novgorod and is navigable over a large part of its total length, as far upstream as to the town of Kaluga. Its length exceeds...
s, 114 kilometres (70.8 mi) (by rail) southeast of Moscow. The area of the city is about 6510 acres (26.3 km²). The city was founded in 1177. Population:

Like some other ancient Russian cities, Kolomna has a kremlin
Kolomna Kremlin
Kolomna Kremlin is a very large fortress in Kolomna, Russia. The stone Kolomna Kremlin was built from 1525—1531 under the Russian Tsar Vasily III. Before its reconstruction in 1531, the Kolomna Kremlin was made of wood...
, which is a citadel
Citadel
A citadel is a fortress for protecting a town, sometimes incorporating a castle. The term derives from the same Latin root as the word "city", civis, meaning citizen....
similar to the more famous one in Moscow (it is also built from red brick). Kolomna citadel was a part of the Great Abatis Border
Great Abatis Border
Zasechnaya cherta is a chain of fortification lines, created by Grand Duchy of Moscow and later the Tsardom of Russia to protect it from the raids of the Crimean Tatars who, rapidly moving along the Muravsky Trail, ravaged the southern provinces of Russia during a series of the Russo-Crimean Wars....
. have been preserved and are held in good shape; a museum is located inside. 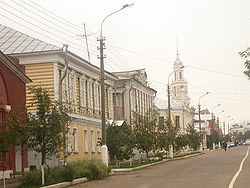 Railroad
Kolomna is located on the Ryazan line of the Moscow railroad 116 km from Moscow
Moscow
Moscow is the capital, the most populous city, and the most populous federal subject of Russia. The city is a major political, economic, cultural, scientific, religious, financial, educational, and transportation centre of Russia and the continent...
. In Kolomna there are one railroad terminal named Golutvin and five railroad stations named Kolomna , Shchurovo , Bochmanovo , 6 km, and Sychevo .

Water
Kolomna is placed on three big rivers, and has passenger and transport berths. Most known one is the Bochmanovo berth.

Kolomna is twinned
Town twinning
Twin towns and sister cities are two of many terms used to describe the cooperative agreements between towns, cities, and even counties in geographically and politically distinct areas to promote cultural and commercial ties.- Terminology :...
with: Molodechno, Belarus
Belarus
Belarus , officially the Republic of Belarus, is a landlocked country in Eastern Europe, bordered clockwise by Russia to the northeast, Ukraine to the south, Poland to the west, and Lithuania and Latvia to the northwest. Its capital is Minsk; other major cities include Brest, Grodno , Gomel ,...
Bauska
Bauska
Bauska is a town in Bauska municipality, in the Zemgale region of southern Latvia. The town is situated at the confluence of the rivers Mūsa and Mēmele where they form the Lielupe River...
, Latvia
Latvia
Latvia , officially the Republic of Latvia , is a country in the Baltic region of Northern Europe. It is bordered to the north by Estonia , to the south by Lithuania , to the east by the Russian Federation , to the southeast by Belarus and shares maritime borders to the west with Sweden...
Raleigh
Raleigh, North Carolina
Raleigh is the capital and the second largest city in the state of North Carolina as well as the seat of Wake County. Raleigh is known as the "City of Oaks" for its many oak trees. According to the U.S. Census Bureau, the city's 2010 population was 403,892, over an area of , making Raleigh...
, North Carolina
North Carolina
North Carolina is a state located in the southeastern United States. The state borders South Carolina and Georgia to the south, Tennessee to the west and Virginia to the north. North Carolina contains 100 counties. Its capital is Raleigh, and its largest city is Charlotte...
, United States
United States
The United States of America is a federal constitutional republic comprising fifty states and a federal district...
Moscow
Moscow
Moscow is the capital, the most populous city, and the most populous federal subject of Russia. The city is a major political, economic, cultural, scientific, religious, financial, educational, and transportation centre of Russia and the continent...
, Russia
Russia
Russia or , officially known as both Russia and the Russian Federation , is a country in northern Eurasia. It is a federal semi-presidential republic, comprising 83 federal subjects...
The source of this article is wikipedia, the free encyclopedia.  The text of this article is licensed under the GFDL.