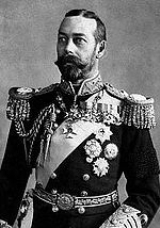 The monarch's title in the Irish Free State was exactly the same as it was elsewhere in the British Empire
British Empire
The British Empire comprised the dominions, colonies, protectorates, mandates and other territories ruled or administered by the United Kingdom. It originated with the overseas colonies and trading posts established by England in the late 16th and early 17th centuries. At its height, it was the...
, being

Under the Free State constitution members of the Oireachtas were required to take Oath of Allegiance to the Irish Free State with a promise of fidelity – but not an Oath of Allegiance – to the King before being permitted to assume their seats. This oath was strongly objected to by many republicans
Irish Republicanism
Irish republicanism is an ideology based on the belief that all of Ireland should be an independent republic.In 1801, under the Act of Union, the Kingdom of Great Britain and the Kingdom of Ireland merged to form the United Kingdom of Great Britain and Ireland...
and was one of the causes of the Irish Civil War
Irish Civil War
The Irish Civil War was a conflict that accompanied the establishment of the Irish Free State as an entity independent from the United Kingdom within the British Empire....
. The oath was eventually abolished in 1933. The Oath of Allegiance read as follows:

I ................ do solemnly swear true faith and allegiance to the Constitution of the Irish Free State as by law established, and that I will be faithful to H. M. King George V., his heirs and successors by law in virtue of the common citizenship of Ireland with Great Britain and her adherence to and membership of the group of nations forming the British Commonwealth of Nations. 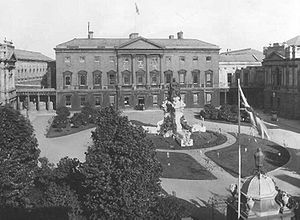 In 1936 the Fianna Fáil
Fianna Fáil
Fianna Fáil – The Republican Party , more commonly known as Fianna Fáil is a centrist political party in the Republic of Ireland, founded on 23 March 1926. Fianna Fáil's name is traditionally translated into English as Soldiers of Destiny, although a more accurate rendition would be Warriors of Fál...
government of Éamon de Valera
Éamon de Valera
Éamon de Valera was one of the dominant political figures in twentieth century Ireland, serving as head of government of the Irish Free State and head of government and head of state of Ireland...
carried out a major revision of the constitution aimed at all but eliminating the role of the monarch in the Irish state, by passing the Constitution (Amendment No. 27) Act 1936. This removed all explicit reference to the monarch from the constitution, abolished the office of Governor-General, and shared all of the monarch's former functions amongst various other organs of government.

However, without mentioning him by name, the amendment also introduced a provision permitting the government to "avail of" the King as a "constitutional organ" for the "appointment of diplomatic and consular agents and the conclusion of international agreements". Thus, henceforth, the monarch was still the head of state but his role was restricted to diplomatic and foreign affairs, a standard head of state role.