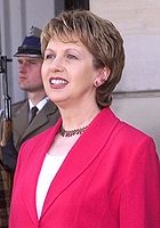 The current president is Michael D. Higgins
Michael D. Higgins
Michael Daniel Higgins is the ninth and current President of Ireland, having taken office on 11 November 2011 following victory in the 2011 Irish presidential election. Higgins is an Irish politician, poet, sociologist, author and broadcaster. Higgins was President of the Labour Party until his...
, who was elected on 29 October 2011.

What security does the president have at inaugurations have you ever been to one if so please tell me if you seen guards of army men i am very interes...
More
x