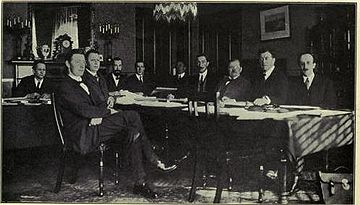 The brother of nationalist
Irish nationalism
Irish nationalism manifests itself in political and social movements and in sentiment inspired by a love for Irish culture, language and history, and as a sense of pride in Ireland and in the Irish people...
leader Eoin MacNeill
Eoin MacNeill
Eoin MacNeill was an Irish scholar, nationalist, revolutionary and politician. MacNeill is regarded as the father of the modern study of early Irish medieval history. He was a co-founder of the Gaelic League, to preserve Irish language and culture, going on to establish the Irish Volunteers...
, James McNeill served as a high ranking civil servant in the Raj Civil Service in Calcutta. Though unconnected with the Easter Rising
Easter Rising
The Easter Rising was an insurrection staged in Ireland during Easter Week, 1916. The Rising was mounted by Irish republicans with the aims of ending British rule in Ireland and establishing the Irish Republic at a time when the British Empire was heavily engaged in the First World War...
in 1916, McNeill was arrested and jailed by the British
United Kingdom
The United Kingdom of Great Britain and Northern IrelandIn the United Kingdom and Dependencies, other languages have been officially recognised as legitimate autochthonous languages under the European Charter for Regional or Minority Languages...
Dublin Castle
Dublin Castle
Dublin Castle off Dame Street, Dublin, Ireland, was until 1922 the fortified seat of British rule in Ireland, and is now a major Irish government complex. Most of it dates from the 18th century, though a castle has stood on the site since the days of King John, the first Lord of Ireland...
administration. On release he was elected to Dublin County Council
Dublin County Council
Dublin County Council was a local authority for the administrative county of County Dublin in the Republic of Ireland. It was established by the Local Government Act 1898....
, becoming its chairman. He served as a member of the committee under Michael Collins
Michael Collins (Irish leader)
Michael "Mick" Collins was an Irish revolutionary leader, Minister for Finance and Teachta Dála for Cork South in the First Dáil of 1919, Director of Intelligence for the IRA, and member of the Irish delegation during the Anglo-Irish Treaty negotiations. Subsequently, he was both Chairman of the...
, the chairman of the Provisional Government, that drafted the Constitution of the Irish Free State
Constitution of the Irish Free State
The Constitution of the Irish Free State was the first constitution of the independent Irish state. It was enacted with the adoption of the Constitution of the Irish Free State Act 1922, of which it formed a part...
. He was subsequently appointed as Irish High Commissioner (ambassador) to the Court of St. James's
Court of St. James's
The Court of St James's is the royal court of the United Kingdom. It previously had the same function in the Kingdom of England and in the Kingdom of Great Britain .-Overview:...
(the United Kingdom.) When the first governor-general, Timothy Michael Healy
Timothy Michael Healy
Timothy Michael Healy, KC , also known as Tim Healy, was an Irish nationalist politician, journalist, author, barrister and one of the most controversial Irish Members of Parliament in the House of Commons of the United Kingdom of Great Britain and Ireland...
retired in December 1927, James McNeill was proposed as his replacement by the Irish government of W. T. Cosgrave and duly appointed by King George V
George V of the United Kingdom
George V was King of the United Kingdom and the British Dominions, and Emperor of India, from 6 May 1910 through the First World War until his death in 1936....
as Governor-General of the Irish Free State.

In office, McNeill clashed with the King's Private Secretary when he insisted on following the constitutional advice of his Irish ministers, rather than the Palace, in procedures relating to the receipt of Letters of Credence
Letter of Credence
A letter of credence is a formal letter usually sent by one head of state to another that formally grants diplomatic accreditation to a named individual to be their ambassador in the country of the head of state receiving the letter...
accrediting ambassadors to the King in Ireland. He also refused to attend ceremonies in Trinity College Dublin when some elements in the college tried to ensure that old British-rule anthem God Save the King
God Save the Queen
"God Save the Queen" is an anthem used in a number of Commonwealth realms and British Crown Dependencies. The words of the song, like its title, are adapted to the gender of the current monarch, with "King" replacing "Queen", "he" replacing "she", and so forth, when a king reigns...
rather than the new Irish anthem, Amhrán na bhFiann
Amhrán na bhFiann
is the national anthem of Ireland. The music was composed by Peadar Kearney and Patrick Heeney, and the original English lyrics were authored by Kearney. It is sung in the Irish language translation made by Liam Ó Rinn. The song has three verses, but the national anthem consists of the chorus only...
was played.

When Éamon de Valera
Éamon de Valera
Éamon de Valera was one of the dominant political figures in twentieth century Ireland, serving as head of government of the Irish Free State and head of government and head of state of Ireland...
was nominated as President of the Executive Council
President of the Executive Council of the Irish Free State
The President of the Executive Council of the Irish Free State was the head of government or prime minister of the Irish Free State which existed from 1922 to 1937...
in 1932, McNeill opted to travel to Leinster House
Leinster House
Leinster House is the name of the building housing the Oireachtas, the national parliament of Ireland.Leinster House was originally the ducal palace of the Dukes of Leinster. Since 1922, it is a complex of buildings, of which the former ducal palace is the core, which house Oireachtas Éireann, its...
, the parliament buildings, to appoint de Valera, rather than require that he go to the Viceregal Lodge
Viceregal Lodge
Viceregal Lodge may refer to:Residences of the Lord Lieutenant of Ireland:* Áras an Uachtaráin, Dublin * Chapelizod House, County Dublin Residences of the Viceroy of India:* Rashtrapati Niwas, Simla...
, the Governor-General's residence and the former seat of British Lords Lieutenant
Lord Lieutenant of Ireland
The Lord Lieutenant of Ireland was the British King's representative and head of the Irish executive during the Lordship of Ireland , the Kingdom of Ireland and the United Kingdom of Great Britain and Ireland...
, so as to avoid embarrassing de Valera, who was a republican
Irish Republicanism
Irish republicanism is an ideology based on the belief that all of Ireland should be an independent republic.In 1801, under the Act of Union, the Kingdom of Great Britain and the Kingdom of Ireland merged to form the United Kingdom of Great Britain and Ireland...
. However McNeill's tact was not reciprocated by de Valera's government, some of whose ministers sought to humiliate McNeill as the King's representative, by withdrawing the Irish Army
Irish Army
The Irish Army, officially named simply the Army is the main branch of the Defence Forces of Ireland. Approximately 8,500 men and women serve in the Irish Army, divided into three infantry Brigades...
's band from playing at functions he attended, demanded he withdraw invitations to visitors to meet him and in one notorious incident, two ministers, Seán T. O'Kelly
Sean T. O'Kelly
Seán Thomas O'Kelly was the second President of Ireland . He was a member of Dáil Éireann from 1918 until his election as President. During this time he served as Minister for Local Government and Minister for Finance...
and Frank Aiken
Frank Aiken
Frank Aiken was a commander of the Irish Republican Army and later an Irish politician. A founding-member of Fianna Fáil, Aiken was first elected to Dáil Éireann in 1923 and at each subsequent election until 1973...
publicly stormed out of a diplomatic function when McNeill, there as the guest of the French
France
The French Republic , The French Republic , The French Republic , (commonly known as France , is a unitary semi-presidential republic in Western Europe with several overseas territories and islands located on other continents and in the Indian, Pacific, and Atlantic oceans. Metropolitan France...
ambassador, arrived. In a fury McNeill wrote to de Valera demanding an apology for his treatment. When none was forthcoming (merely an ambiguous message from de Valera that could be interpreted as partially blaming McNeill for attending functions that ministers had been invited to), he published his correspondence with de Valera, even though de Valera had formally advised him not to do so. De Valera demanded that King George V
George V of the United Kingdom
George V was King of the United Kingdom and the British Dominions, and Emperor of India, from 6 May 1910 through the First World War until his death in 1936....
dismiss McNeill.
The King however engineered a compromise, whereby de Valera withdrew his dismissal request, and McNeill, who was due to retire at the end of 1932, would bring forward his retirement date. McNeill, at the King's request, resigned on 1 November 1932.
De Valera later admitted that his government's treatment of McNeill was unfair and unwarranted.