The mollusc shell is typically a calcareous exoskeleton
Exoskeleton
An exoskeleton is the external skeleton that supports and protects an animal's body, in contrast to the internal skeleton of, for example, a human. In popular usage, some of the larger kinds of exoskeletons are known as "shells". Examples of exoskeleton animals include insects such as grasshoppers...
which encloses, supports and protects the soft parts of an animal in the phylum
Phylum
In biology, a phylum The term was coined by Georges Cuvier from Greek φῦλον phylon, "race, stock," related to φυλή phyle, "tribe, clan." is a taxonomic rank below kingdom and above class. "Phylum" is equivalent to the botanical term division....
Mollusca
Mollusca
The Mollusca , common name molluscs or mollusksSpelled mollusks in the USA, see reasons given in Rosenberg's ; for the spelling mollusc see the reasons given by , is a large phylum of invertebrate animals. There are around 85,000 recognized extant species of molluscs. Mollusca is the largest...
, which includes snail
Snail
Snail is a common name applied to most of the members of the molluscan class Gastropoda that have coiled shells in the adult stage. When the word is used in its most general sense, it includes sea snails, land snails and freshwater snails. The word snail without any qualifier is however more often...
s, clam
Clam
The word "clam" can be applied to freshwater mussels, and other freshwater bivalves, as well as marine bivalves.In the United States, "clam" can be used in several different ways: one, as a general term covering all bivalve molluscs...
s, tusk shell
Tusk shell
The tusk shells or scaphopods are a class of shelled marine mollusks. The scientific name of this class is Scaphopoda, meaning "shovel-footed". Shells of species within this class range from about 0.5 to 15 cm in length...
s, and several other classes. Not all shelled molluscs live in the sea, many live on the land and in freshwater.

The ancestral mollusc is thought to have had a shell, but this has subsequently been lost or reduced on some families, such as the squid, octopus, and some smaller groups such as the caudofoveata
Caudofoveata
Caudofoveata is a small class within the phylum Mollusca, also known as Chaetodermomorpha. The class is often combined with Solenogastres and termed Aplacophora. However, such a grouping is not monophyletic; molecular data suggests that the Caudofoveata are a sister group to the cephalopods.-...
and solenogastres
Neomeniomorpha
The Solenogastres , common name solenogasters, are a subclass of worm-like, small, shell-less molluscs , the other subclass being the Caudofoveata .-Morphology:...
, and the highly derived Xenoturbella
Xenoturbella
Xenoturbella is a genus of bilaterian animals; it contains two marine worm-like species. The first known species was discovered in 1915 by Sixten Bock but the first published description was only in 1949 by Einar Westblad...
. Today, over 100,000 living species bear a shell; there is some dispute as to whether these shell-bearing molluscs form a monophyletic group (conchifera) or whether shell-less molluscs are interleaved into their family tree.

Malacology
Malacology
Malacology is the branch of invertebrate zoology which deals with the study of the Mollusca , the second-largest phylum of animals in terms of described species after the arthropods. Mollusks include snails and slugs, clams, octopus and squid, and numerous other kinds, many of which have shells...
, the scientific study of molluscs as living organisms, has a branch devoted to the study of shells, and this is called conchology
Conchology
Conchology is the scientific or amateur study of mollusc shells. Conchology is one aspect of malacology, the study of molluscs, however malacology studies molluscs as whole organisms, not just their shells. Conchology pre-dated malacology as a field of study. It includes the study of land and...
- although these terms used to be, and to a minor extent still are, used interchangeably, even by scientists (this is more common in Europe).

Within some species
Species
In biology, a species is one of the basic units of biological classification and a taxonomic rank. A species is often defined as a group of organisms capable of interbreeding and producing fertile offspring. While in many cases this definition is adequate, more precise or differing measures are...
of molluscs there is often a surprising degree of variation in the exact shape, pattern, ornamentation, and color of the shell. 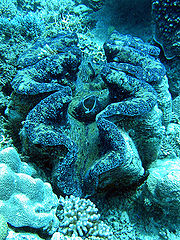 A mollusc shell is formed, repaired and maintained by a part of the anatomy called the mantle
Mantle (mollusc)
The mantle is a significant part of the anatomy of molluscs: it is the dorsal body wall which covers the visceral mass and usually protrudes in the form of flaps well beyond the visceral mass itself.In many, but by no means all, species of molluscs, the epidermis of the mantle secretes...
. Any injuries to or abnormal conditions of the mantle are usually reflected in the shape and form and even color of the shell. When the animal encounters harsh conditions that limit its food supply, or otherwise cause it to become dormant for a while, the mantle often ceases to produce the shell substance. When conditions improve again and the mantle resumes its task, a "growth line" is produced.

The mantle edge secretes a shell which has two components. The organic constituent is mainly made up of polysaccharides and glycoproteins; its composition may vary widely: some molluscs employ a wide range of chitin-control genes to create their matrix, whereas others just express one, suggesting that the role of chitin in the shell framework is highly variable; it may even be absent in monoplacophora. This organic framework controls the formation of calcium carbonate
Calcium carbonate
Calcium carbonate is a chemical compound with the formula CaCO3. It is a common substance found in rocks in all parts of the world, and is the main component of shells of marine organisms, snails, coal balls, pearls, and eggshells. Calcium carbonate is the active ingredient in agricultural lime,...
crystals, (never phosphate with the questionable exception of Cobcrephora
Cobcrephora
Cobcrephora is a genus of chiton known from the Silurian of Gotland.Its mollusc shell is unique, because Cobcrephora was described on the basis of isolated phosphatic sclerites. Its overlapping sclerites are arched and small, comprise two shell layers, and have lamellar projections....
), and dictates when and where crystals start and stop growing, and how fast they expand; it even controls the polymorph of the crystal deposited, controlling positioning and elongation of crystals and preventing their growth where appropriate.

The shell formation requires certain biological machinery. The shell is deposited within a small compartment, the extrapallial space, which is sealed from the environment by the periostracum
Periostracum
The periostracum is a thin organic coating or "skin" which is the outermost layer of the shell of many shelled animals, including mollusks and brachiopods. Among mollusks it is primarily seen in snails and clams, i.e. in bivalves and gastropods, but it is also found in cephalopods such as the...
, a leathery outer layer around the rim of the shell, where growth occurs. This caps of the extrapallial space, which is bounded on its other surfaces by the existing shell and the mantle. The periostracum acts as a framework from which the outer layer of carbonate can be suspended, but also, in sealing the compartment, allows the accumulation of ions in concentrations sufficient for crystallization to occur. The accumulation of ions is driven by ion pumps packed within the calcifying epithelium. Calcium ions are obtained from the organism's environment through the gills, gut and epithelium, transported by the haemolymph ("blood") to the calcifying epithelium, and stored as granules within or in-between cells ready to be dissolved and pumped into the extrapallial space when they are required. The organic matrix forms the scaffold that directs crystallization, and the deposition and rate of crystals is also controlled by hormones produced by the mollusc. Because the extrapallial space is supersaturated, the matrix could be thought of as impeding, rather than encouraging, carbonate deposition; although it does act as a nucleating point for the crystals and controls their shape, orientation and polymorph, it also terminates their growth once they reach the necessary size. Nucleation is endoepithelial in Neopilina
Neopilina
Neopilina is a highly derived genus of modern monoplacophoran.However, molecular methods show that they fall within the polyplacophoran clade, and fossil and morphological data show that they are rather derived and bear very little resemblance to an 'ancestral mollusc'.- Anatomy :Its anatomy led...
and Nautilus
Nautilus (genus)
Nautilus is a genus of cephalopods in the family Nautilidae. Species in this genus differ significantly in terms of morphology from those placed in the sister taxon Allonautilus. The oldest fossils of the genus are known from the Late Eocene Hoko River Formation, in Washington State and from...
, but exoepithelial in the bivalves and gastropods.