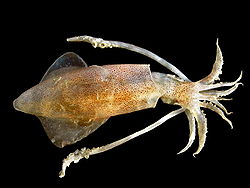 The mantle is a significant part of the anatomy of molluscs: it is the dorsal
Dorsum (biology)
In anatomy, the dorsum is the upper side of animals that typically run, fly, or swim in a horizontal position, and the back side of animals that walk upright. In vertebrates the dorsum contains the backbone. The term dorsal refers to anatomical structures that are either situated toward or grow...
body wall which covers the visceral mass and usually protrudes in the form of flaps well beyond the visceral mass itself.

In many, but by no means all, species of molluscs, the epidermis of the mantle secretes calcium carbonate
Calcium carbonate
Calcium carbonate is a chemical compound with the formula CaCO3. It is a common substance found in rocks in all parts of the world, and is the main component of shells of marine organisms, snails, coal balls, pearls, and eggshells. Calcium carbonate is the active ingredient in agricultural lime,...
and conchiolin
Conchiolin
Conchiolin and perlucin are complex proteins which are secreted by a mollusc's outer epithelium ....
, and creates a shell
Mollusc shell
The mollusc shell is typically a calcareous exoskeleton which encloses, supports and protects the soft parts of an animal in the phylum Mollusca, which includes snails, clams, tusk shells, and several other classes...
.

The words mantle and pallium both originally meant cloak or cape, see mantle (vesture). This anatomical structure in molluscs often resembles a cloak because in many groups the edges of the mantle extend far beyond the main part of the body, forming flaps, double-layered structures which have been adapted for many different uses, including for example, the siphon.

The mantle cavity is a central feature of molluscan biology. This cavity is formed by the mantle skirt, a double fold of mantle which encloses a water space. This space contains the mollusc's gill
Gill
A gill is a respiratory organ found in many aquatic organisms that extracts dissolved oxygen from water, afterward excreting carbon dioxide. The gills of some species such as hermit crabs have adapted to allow respiration on land provided they are kept moist...
s, anus
Anus
The anus is an opening at the opposite end of an animal's digestive tract from the mouth. Its function is to control the expulsion of feces, unwanted semi-solid matter produced during digestion, which, depending on the type of animal, may be one or more of: matter which the animal cannot digest,...
, osphradium
Osphradium
The osphradium is the olfactory organ in certain molluscs, linked with the respiration organ.The main function of this is to test incoming water for silt and other possible food particles.It is used by all members of the Genus Conus....
, nephridiopore
Nephridiopore
Nephridiopore is part of the nephridia, an excretory organ found in many organisms, such as flatworms or annelids. Nephridia are analogous to nephrons or uriniferous tubules found in the kidney of humans....
s, and gonopore
Gonopore
A gonopore, sometimes called a gonadopore, is a genital pore in many invertebrates. Hexapods, including insects have a single common gonopore, except mayflies, which have a pair of gonopores...
s.

The mantle cavity functions as a respiratory
Respiration (physiology)
'In physiology, respiration is defined as the transport of oxygen from the outside air to the cells within tissues, and the transport of carbon dioxide in the opposite direction...
chamber in most molluscs. In bivalves it is usually part of the feeding structure. In some molluscs the mantle cavity is a brood chamber, and in cephalopods and some bivalves such as scallop
Scallop
A scallop is a marine bivalve mollusk of the family Pectinidae. Scallops are a cosmopolitan family, found in all of the world's oceans. Many scallops are highly prized as a food source...
s, it is a locomotory organ.

The mantle is highly muscular. In cephalopods the contraction of the mantle is used to force water through a tubular siphon, the hyponome
Hyponome
A siphon is an anatomical structure which is part of the body of aquatic molluscs in three classes: Gastropoda, Bivalvia and Cephalopoda. In other words, a siphon is found in some saltwater and freshwater snails, in some clams, and in octopus, squid and relatives.Siphons in molluscs are tube-like...
, and this propels the animal very rapidly through the water. In gastropods it is used as a kind of "foot" for locomotion over the surface. In Patella the foot includes the entire ventral surface of the animal. The foot of the Bivalvia
Bivalvia
Bivalvia is a taxonomic class of marine and freshwater molluscs. This class includes clams, oysters, mussels, scallops, and many other families of molluscs that have two hinged shells...
is a fleshy process adapted by its form to digging rather than to locomotion.

In shelled molluscs, the mantle is what forms the shell, and what adds to the shell to increase its size and strength as the animal grows. Shell material is secreted by the ectoderm
Ectoderm
The "ectoderm" is one of the three primary germ cell layers in the very early embryo. The other two layers are the mesoderm and endoderm , with the ectoderm as the most exterior layer...
ic (epithelial) cells
Cell (biology)
The cell is the basic structural and functional unit of all known living organisms. It is the smallest unit of life that is classified as a living thing, and is often called the building block of life. The Alberts text discusses how the "cellular building blocks" move to shape developing embryos....
of the mantle tissue.

The mantle of many gastropods is usually fully or partially hidden inside the gastropod shell
Gastropod shell
The gastropod shell is a shell which is part of the body of a gastropod or snail, one kind of mollusc. The gastropod shell is an external skeleton or exoskeleton, which serves not only for muscle attachment, but also for protection from predators and from mechanical damage...
.
In species where the shell is small compared to the size of the body, more of the mantle shows. Shell-less slug
Slug
Slug is a common name that is normally applied to any gastropod mollusc that lacks a shell, has a very reduced shell, or has a small internal shell...
s have the mantle fully visible. The dorsal surface of the mantle is called the notum, while the ventral surface of the mantle is called the hyponotum. In the family Philomycidae
Philomycidae
Philomycidae are a family of air-breathing land slugs . They are terrestrial pulmonate gastropod mollusks in the superfamily Arionoidea ....
, the mantle covers the whole back side of the body.