Encyclopedia
In industrial process engineering
Process engineering
Process engineering focuses on the design, operation, control, and optimization of chemical, physical, and biological processes through the aid of systematic computer-based methods...
, mixing is a unit operation
Unit operation
In chemical engineering and related fields, a unit operation is a basic step in a process.Unit operation involves bringing a physical change such as separation, crystallization, evaporation, filtration etc.. For example in milk processing, homogenization, pasteurization, chilling, and packaging are...
that involves manipulating a heterogeneous physical system, with the intent to make it more homogeneous. Familiar examples include pumping
Pumping
Pumping can refer to:*The operation of a pump, for moving a liquid from one location to another**The use of a breast pump or milking machine for extraction of milk*Gastric lavage The process of cleaning the contents of the stomach...
of the water
Water
Water is a chemical substance with the chemical formula H2O. A water molecule contains one oxygen and two hydrogen atoms connected by covalent bonds. Water is a liquid at ambient conditions, but it often co-exists on Earth with its solid state, ice, and gaseous state . Water also exists in a...
in a swimming pool
Swimming pool
A swimming pool, swimming bath, wading pool, or simply a pool, is a container filled with water intended for swimming or water-based recreation. There are many standard sizes; the largest is the Olympic-size swimming pool...
to homogenize the water temperature
Temperature
Temperature is a physical property of matter that quantitatively expresses the common notions of hot and cold. Objects of low temperature are cold, while various degrees of higher temperatures are referred to as warm or hot...
, and the stirring of pancake
Pancake
A pancake is a thin, flat, round cake prepared from a batter, and cooked on a hot griddle or frying pan. Most pancakes are quick breads; some use a yeast-raised or fermented batter. Most pancakes are cooked one side on a griddle and flipped partway through to cook the other side...
batter to eliminate lumps.

Blending powders is one of the oldest unit-operations in the solids handling industries. For many decades powder blending has been used just to homogenise bulk materials. Many different machines have been designed in order to be able to handle materials with various bulk solids properties. On the basis of the practical experience gained with these different machines, engineering knowledge has been developed to construct reliable equipment and to predict scale-up and mixing behaviour. Nowadays the same mixing technologies are used for many more applications: to improve product quality, to coat particles, to fuse materials, to wet, to dispers in liquid, to agglomerate, to alter functional material properties, etc.
This wide range of applications of mixing equipment requires a high level of knowledge, long time experience and extended test facilities in order to come to the optimal selection of equipment and processes.

In powder mixing two different dimensions in the mixing process can be determined: convective mixing and intensive mixing. In the case of convective mixing material in the mixer is transported from one location to another. This type of mixing process will lead to a less ordered state inside the mixer, the components which have to be mixed will be distributed over the other components. With progressing time the mixture will become more and more randomly ordered. After a certain mixing time the ultimate random state is reached. Usually this type of mixing is applied for free-flowing and coarse materials. Possible threat during macro mixing is the de-mixing of the components, since differences in size, shape or density of the different particles can lead to segregation. In the convective mixing range, Hosokawa has several processes available from silo mixers to horizontal mixers and conical mixers.
When materials are cohesive, which is the case with e.g. fine particles and also with wet material, convective mixing is no longer sufficient to obtain a randomly ordered mixture. The relative strong inter-particle forces will form lumps, which are not broken up by the mild transportation forces in the convective mixer. In order to decrease the lump size additional forces are necessary; i.e. more energy intensive mixing is required. These additional forces can either be impact forces or shear forces.

The level of mixing is determined by the pumping effect or dynamic response that the mixer imparts into the fluid. When a mixing impeller rotates in the fluid, it generates a combination of flow and shear. The impeller generated flow can be calculated by using the following equation:

Output is in Gallons / Minute
Flow numbers for impellers have been published by the North American Mixing Forum, Post Mixing, and Fusion Fluid Equipment. 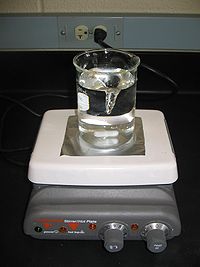 At an industrial scale, efficient mixing can be difficult to achieve. A great deal of engineering effort goes into designing and improving mixing processes. Mixing at industrial scale is done in batches (dynamic mixing) or with help of static mixer
Static mixer
A static mixer is a device for mixing two fluid materials. Most commonly, the fluids are liquid; however, static mixers are used to mix gas streams, disperse gas into liquid or disperse immiscible liquids. The device consists of mixer elements contained in a cylindrical or squared housing. These...
s.

Typical example of a mixing process in the industry
Industry
Industry refers to the production of an economic good or service within an economy.-Industrial sectors:There are four key industrial economic sectors: the primary sector, largely raw material extraction industries such as mining and farming; the secondary sector, involving refining, construction,...
is concrete
Concrete
Concrete is a composite construction material, composed of cement and other cementitious materials such as fly ash and slag cement, aggregate , water and chemical admixtures.The word concrete comes from the Latin word...
mixing, where cement
Cement
In the most general sense of the word, a cement is a binder, a substance that sets and hardens independently, and can bind other materials together. The word "cement" traces to the Romans, who used the term opus caementicium to describe masonry resembling modern concrete that was made from crushed...
, sand
Sand
Sand is a naturally occurring granular material composed of finely divided rock and mineral particles.The composition of sand is highly variable, depending on the local rock sources and conditions, but the most common constituent of sand in inland continental settings and non-tropical coastal...
, small stones
Rock (geology)
In geology, rock or stone is a naturally occurring solid aggregate of minerals and/or mineraloids.The Earth's outer solid layer, the lithosphere, is made of rock. In general rocks are of three types, namely, igneous, sedimentary, and metamorphic...
or gravel
Gravel
Gravel is composed of unconsolidated rock fragments that have a general particle size range and include size classes from granule- to boulder-sized fragments. Gravel can be sub-categorized into granule and cobble...
and water
Water
Water is a chemical substance with the chemical formula H2O. A water molecule contains one oxygen and two hydrogen atoms connected by covalent bonds. Water is a liquid at ambient conditions, but it often co-exists on Earth with its solid state, ice, and gaseous state . Water also exists in a...
are commingled to a homogeneous
Homogeneous (chemistry)
A substance that is uniform in composition is a definition of homogeneous. This is in contrast to a substance that is heterogeneous.The definition of homogeneous strongly depends on the context used. In Chemistry, a homogeneous suspension of material means that when dividing the volume in half, the...
self-hardening mass
Mass
Mass can be defined as a quantitive measure of the resistance an object has to change in its velocity.In physics, mass commonly refers to any of the following three properties of matter, which have been shown experimentally to be equivalent:...
, used in the construction industry. Another classical mixing process is mulling foundry molding
Molding
Molding or moulding may refer to:*Molding , feature formed from marble, plaster, wood, etc. and used in interior design*Molding , process used in manufacturing to shape materials*Car body molding...
sand, where sand, bentonite
Bentonite
Bentonite is an absorbent aluminium phyllosilicate, essentially impure clay consisting mostly of montmorillonite. There are different types of bentonite, each named after the respective dominant element, such as potassium , sodium , calcium , and aluminum . Experts debate a number of nomenclatorial...
clay
Clay
Clay is a general term including many combinations of one or more clay minerals with traces of metal oxides and organic matter. Geologic clay deposits are mostly composed of phyllosilicate minerals containing variable amounts of water trapped in the mineral structure.- Formation :Clay minerals...
, fine coal
Coal
Coal is a combustible black or brownish-black sedimentary rock usually occurring in rock strata in layers or veins called coal beds or coal seams. The harder forms, such as anthracite coal, can be regarded as metamorphic rock because of later exposure to elevated temperature and pressure...
dust
Dust
Dust consists of particles in the atmosphere that arise from various sources such as soil dust lifted up by wind , volcanic eruptions, and pollution...
and water are mixed to a plastic
Plasticity (physics)
In physics and materials science, plasticity describes the deformation of a material undergoing non-reversible changes of shape in response to applied forces. For example, a solid piece of metal being bent or pounded into a new shape displays plasticity as permanent changes occur within the...
, mold
Mold
Molds are fungi that grow in the form of multicellular filaments called hyphae. Molds are not considered to be microbes but microscopic fungi that grow as single cells called yeasts...
able and reusable mass, applied for molding and pouring molten
Melt
Melt can refer to:* Melting, in physics, the process of heating a solid substance to a liquid*Melt , the semi-liquid material used in steelmaking and glassblowing*Melt inclusions, a feature of igneous rock...
metal to obtain sand casting
Sand casting
Sand casting, also known as sand molded casting, is a metal casting process characterized by using sand as the mold material.It is relatively cheap and sufficiently refractory even for steel foundry use. A suitable bonding agent is mixed or occurs with the sand...
s that are metallic parts for automobile, machine
Machine
A machine manages power to accomplish a task, examples include, a mechanical system, a computing system, an electronic system, and a molecular machine. In common usage, the meaning is that of a device having parts that perform or assist in performing any type of work...
building
Building
In architecture, construction, engineering, real estate development and technology the word building may refer to one of the following:...
, construction
Construction
In the fields of architecture and civil engineering, construction is a process that consists of the building or assembling of infrastructure. Far from being a single activity, large scale construction is a feat of human multitasking...
or other industries.

The opposite of mixing is segregation
Separation process
In chemistry and chemical engineering, a separation process, or simply a separation, is any mass transfer process used to convert a mixture of substances into two or more distinct product mixtures, at least one of which is enriched in one or more of the mixture's constituents. In some cases, a...
. A classical example of segregation is the brazil nut effect
Brazil nut effect
Granular convection is a phenomenon where granular material subjected to shaking or vibration will exhibit circulation patterns similar to types of fluid convection...
.
The source of this article is wikipedia, the free encyclopedia.  The text of this article is licensed under the GFDL.