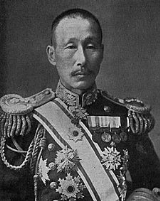 Encyclopedia
Viscount
Viscount
A viscount or viscountess is a member of the European nobility whose comital title ranks usually, as in the British peerage, above a baron, below an earl or a count .-Etymology:...
was a career officer in the Imperial Japanese Navy
Imperial Japanese Navy
The Imperial Japanese Navy was the navy of the Empire of Japan from 1869 until 1947, when it was dissolved following Japan's constitutional renunciation of the use of force as a means of settling international disputes...
, cabinet minister, and Prime Minister of Japan
Prime Minister of Japan
The is the head of government of Japan. He is appointed by the Emperor of Japan after being designated by the Diet from among its members, and must enjoy the confidence of the House of Representatives to remain in office...
from 12 June 1922 to 24 August 1923.

Born in Hiroshima
Hiroshima
is the capital of Hiroshima Prefecture, and the largest city in the Chūgoku region of western Honshu, the largest island of Japan. It became best known as the first city in history to be destroyed by a nuclear weapon when the United States Army Air Forces dropped an atomic bomb on it at 8:15 A.M...
, Aki Province
Aki Province
or Geishū was a province in the Chūgoku Region of western Honshū, comprising the western part of what is today Hiroshima Prefecture.When Emperor Shōmu ordered two official temples for each province , two temples were founded in Aki Province...
(modern Hiroshima Prefecture
Hiroshima Prefecture
is a prefecture of Japan located in the Chūgoku region on Honshu island. The capital is the city of Hiroshima.- History :The area around Hiroshima was formerly divided into Bingo Province and Aki Province. This location has been a center of trade and culture since the beginning of Japan's recorded...
) to a samurai
Samurai
is the term for the military nobility of pre-industrial Japan. According to translator William Scott Wilson: "In Chinese, the character 侍 was originally a verb meaning to wait upon or accompany a person in the upper ranks of society, and this is also true of the original term in Japanese, saburau...
family, Katō enrolled in the 7th class Imperial Japanese Naval Academy
Imperial Japanese Naval Academy
The was a school established to train officers for the Imperial Japanese Navy. It originally located in Nagasaki, moved to Yokohama in 1866, and was relocated to Tsukiji, Tokyo in 1869. It moved to Etajima, Hiroshima in 1888...
and graduated second out of a class of 30 cadets. He specialized in both in naval artillery
Naval artillery
Naval artillery, or naval riflery, is artillery mounted on a warship for use in naval warfare. Naval artillery has historically been used to engage either other ships, or targets on land; in the latter role it is currently termed naval gunfire fire support...
and in navigation.

After his commissioning as lieutenant
Lieutenant
A lieutenant is a junior commissioned officer in many nations' armed forces. Typically, the rank of lieutenant in naval usage, while still a junior officer rank, is senior to the army rank...
, Katō served on the corvette
Corvette
A corvette is a small, maneuverable, lightly armed warship, originally smaller than a frigate and larger than a coastal patrol craft or fast attack craft , although many recent designs resemble frigates in size and role...
in 1887, followed by the cruiser
Cruiser
A cruiser is a type of warship. The term has been in use for several hundreds of years, and has had different meanings throughout this period...
. During the First Sino-Japanese War
First Sino-Japanese War
The First Sino-Japanese War was fought between Qing Dynasty China and Meiji Japan, primarily over control of Korea...
, he served in a combat position as gunnery officer on the cruiser . After the end of the war, he served in numerous staff positions before promotion to commander
Commander
Commander is a naval rank which is also sometimes used as a military title depending on the individual customs of a given military service. Commander is also used as a rank or title in some organizations outside of the armed forces, particularly in police and law enforcement.-Commander as a naval...
. He was executive officer
Executive officer
An executive officer is generally a person responsible for running an organization, although the exact nature of the role varies depending on the organization.-Administrative law:...
on the battleship
Battleship
A battleship is a large armored warship with a main battery consisting of heavy caliber guns. Battleships were larger, better armed and armored than cruisers and destroyers. As the largest armed ships in a fleet, battleships were used to attain command of the sea and represented the apex of a...
, and captain
Captain (naval)
Captain is the name most often given in English-speaking navies to the rank corresponding to command of the largest ships. The NATO rank code is OF-5, equivalent to an army full colonel....
of the . He was promoted to rear admiral
Rear Admiral
Rear admiral is a naval commissioned officer rank above that of a commodore and captain, and below that of a vice admiral. It is generally regarded as the lowest of the "admiral" ranks, which are also sometimes referred to as "flag officers" or "flag ranks"...
on 1 September 1904.

Katō became Vice Minister of the Navy in 1906, and was promoted to vice admiral
Vice Admiral
Vice admiral is a senior naval rank of a three-star flag officer, which is equivalent to lieutenant general in the other uniformed services. A vice admiral is typically senior to a rear admiral and junior to an admiral...
on 28 August 1908. In 1909, he was appointed commander of the Kure Naval District
Kure Naval District
was the second of four main administrative districts of the pre-war Imperial Japanese Navy. Its territory included the Inland Sea of Japan and the Pacific coasts of southern Honshū from Wakayama to Yamaguchi prefectures, eastern and northern Kyūshū and Shikoku....
, and in 1913 became Commander in Chief of the Combined Fleet
Combined Fleet
The was the main ocean-going component of the Imperial Japanese Navy. The Combined Fleet was not a standing force, but a temporary force formed for the duration of a conflict or major naval maneuvers from various units normally under separate commands in peacetime....
.

Katō became Minister of the Navy
Ministry of the Navy of Japan
The was a cabinet-level ministry in the Empire of Japan charged with the administrative affairs of the Imperial Japanese Navy . It existed from 1872 to 1945.-History:...
in August 1915, days before his promotion to full admiral
Admiral
Admiral is the rank, or part of the name of the ranks, of the highest naval officers. It is usually considered a full admiral and above vice admiral and below admiral of the fleet . It is usually abbreviated to "Adm" or "ADM"...
on 28 August 1915. He served in this post in the cabinets of Ōkuma Shigenobu
Okuma Shigenobu
Marquis ; was a statesman in the Empire of Japan and the 8th and 17th Prime Minister of Japan...
, Terauchi Masatake
Terauchi Masatake
, GCB was a Japanese military officer and politician. He was a Field Marshal in the Imperial Japanese Army and the 18th Prime Minister of Japan from 9 October 1916 to 29 September 1918.-Early period:...
, Hara Takashi
Hara Takashi
was a Japanese politician and the 19th Prime Minister of Japan from 29 September 1918 to 4 November 1921. He was also called Hara Kei informally. He was the first commoner appointed to the office of prime minister of Japan...
, and Takahashi Korekiyo
Takahashi Korekiyo
Viscount was a Japanese politician and the 20th Prime Minister of Japan from 13 November 1921 to 12 June 1922. He was known as an expert on finance during his political career.-Early life :...
. Under Hara and Takahashi, Katō was Japan's chief commissioner plenipotentiary
Plenipotentiary
The word plenipotentiary has two meanings. As a noun, it refers to a person who has "full powers." In particular, the term commonly refers to a diplomat fully authorized to represent his government as a prerogative...
to the Washington Naval Conference
Washington Naval Conference
The Washington Naval Conference also called the Washington Arms Conference, was a military conference called by President Warren G. Harding and held in Washington from 12 November 1921 to 6 February 1922. Conducted outside the auspices of the League of Nations, it was attended by nine nations...
, and worked with Ambassador Shidehara Kijurō
Kijuro Shidehara
Baron was a prominent pre–World War II Japanese diplomat and the 44th Prime Minister of Japan from 9 October 1945 to 22 May 1946. He was a leading proponent of pacifism in Japan before and after World War II, and was also the last Japanese prime minister who was a member of the kazoku...
in the negotiations that led to the Five-Power Treaty.

Following his return to Japan, Katō was appointed 21st Prime Minister of Japan
Prime Minister of Japan
The is the head of government of Japan. He is appointed by the Emperor of Japan after being designated by the Diet from among its members, and must enjoy the confidence of the House of Representatives to remain in office...
in recognition of his performance at the Washington Naval Conference. His cabinet consisted mainly of bureaucrats and members of the House of Peers
House of Peers (Japan)
The ' was the upper house of the Imperial Diet as mandated under the Constitution of the Empire of Japan ....
, which proved unpopular with the Imperial Japanese Army
Imperial Japanese Army
-Foundation:During the Meiji Restoration, the military forces loyal to the Emperor were samurai drawn primarily from the loyalist feudal domains of Satsuma and Chōshū...
. During his tenure as prime minister, Katō implemented the provisions of the Washington Naval Agreement, withdrew Japanese forces from Shantung in China
China
Chinese civilization may refer to:* China for more general discussion of the country.* Chinese culture* Greater China, the transnational community of ethnic Chinese.* History of China* Sinosphere, the area historically affected by Chinese culture...
and ended Japanese participation in the Siberian Intervention
Siberian Intervention
The ', or the Siberian Expedition, of 1918–1922 was the dispatch of troops of the Entente powers to the Russian Maritime Provinces as part of a larger effort by the western powers and Japan to support White Russian forces against the Bolshevik Red Army during the Russian Civil War...
. Katō succumbed to late-stage colon cancer and died a little over a year into his term.

Katō was given the honorary rank of Fleet Admiral
Admiral of the Fleet (Japan)
' was the highest rank in the prewar Imperial Japanese Navy. The term gensui was used for both the Navy and the Imperial Japanese Army, and was a largely honorific title awarded for extremely meritorious service to the Emperor. In the Meiji period, the title was awarded to 5 generals and 3 admirals...
the day before his death, and posthumously awarded the Grand Cordon of the Supreme Order of the Chrysanthemum
Order of the Chrysanthemum
is Japan's highest order. The Grand Cordon of the Order was established in 1876 by Emperor Meiji of Japan; the collar of the Order was added on January 4, 1888. Although technically the order has only one class, it can either be awarded with collar , or with grand cordon...
and his title raised to shishaku (viscount
Viscount
A viscount or viscountess is a member of the European nobility whose comital title ranks usually, as in the British peerage, above a baron, below an earl or a count .-Etymology:...
).

His death came immediately before the Great Kantō Earthquake
1923 Great Kanto earthquake
The struck the Kantō plain on the Japanese main island of Honshū at 11:58:44 am JST on September 1, 1923. Varied accounts hold that the duration of the earthquake was between 4 and 10 minutes...
of 1923, and therefore Japan was without a prime minister during that disaster.

Katō's grave is at Aoyama Cemetery
Aoyama Cemetery
is a cemetery in Minato, Tokyo, Japan, managed by the Tokyo Metropolitan Government. The cemetery is also famous for its cherry blossoms, and at the season of hanami, many people visit.-History:...
, Tokyo.