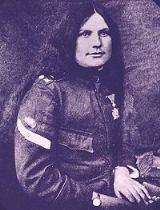 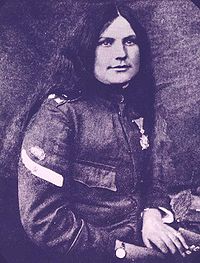 Milunka Savić was a Serbia
Serbia
Serbia , officially the Republic of Serbia , is a landlocked country located at the crossroads of Central and Southeast Europe, covering the southern part of the Carpathian basin and the central part of the Balkans...
n woman war heroine from the First World War, recognised as the most-decorated female combatant in the entire history of warfare. She was wounded no fewer than nine times during her term-of-service.

She was born in a village known as Koprivnica near Raška, Serbia in 1888. In 1913, her brother received call-up papers for mobilization
Mobilization
Mobilization is the act of assembling and making both troops and supplies ready for war. The word mobilization was first used, in a military context, in order to describe the preparation of the Prussian army during the 1850s and 1860s. Mobilization theories and techniques have continuously changed...
this, in the war between Serbia and Bulgaria
Second Balkan War
The Second Balkan War was a conflict which broke out when Bulgaria, dissatisfied with its share of the spoils of the First Balkan War, attacked its former allies, Serbia and Greece, on 29 June 1913. Bulgaria had a prewar agreement about the division of region of Macedonia...
. She elected to go in his place - cutting her hair and donning men’s clothes and joining the Serb Army
Serbian Army
-Objectives:The Serbian Army is responsible for:* deterring armed threats* defending Serbia's territory* participation in peacekeeping operations* providing humanitarian aid and disaster relief-Personnel:...
. She quickly saw action and received her first medal and was promoted to Corporal
Corporal
Corporal is a rank in use in some form by most militaries and by some police forces or other uniformed organizations. It is usually equivalent to NATO Rank Code OR-4....
in the battle of Bregalnica
Battle of Bregalnica
The Battle of Bregalnica was fought between the Kingdom of Bulgaria army and the Kingdom of Serbia during the Second Balkan War. Serbian forces came out victorious....
. Engaged in battle, she sustained wounds and it was only then, when recovering from her injuries in hospital, that her true gender was revealed - much to the surprise of the attending physicians.

In 1914, during the height of World War I
World War I
World War I , which was predominantly called the World War or the Great War from its occurrence until 1939, and the First World War or World War I thereafter, was a major war centred in Europe that began on 28 July 1914 and lasted until 11 November 1918...
, she was awarded her first Karađorđe Star with Swords after the Battle of Kolubara
Battle of Kolubara
The Battle of Kolubara was a major victory of Serbia over the invading Austro-Hungarian armies during World War I. The invaders were routed, and driven back across the Serbian border....
. She received her second Karađorđe Star (with Swords) after the Battle of Crna Reka in 1916 when she captured 23 Bulgarian
Bulgarians
The Bulgarians are a South Slavic nation and ethnic group native to Bulgaria and neighbouring regions. Emigration has resulted in immigrant communities in a number of other countries.-History and ethnogenesis:...
soldiers single-handedly.

In Thessalonica, as a test of skill, she hit a bottle of cognac
Cognac
Cognac is a commune in the Charente department in southwestern France. It is a sub-prefecture of the department.-Geography:Cognac is situated on the river Charente between the towns of Angoulême and Saintes. The majority of the town has been built on the river's left bank, with the smaller right...
at 40 m distance with a hand grenade
Hand grenade
A hand grenade is any small bomb that can be thrown by hand. Hand grenades are classified into three categories, explosive grenades, chemical and gas grenades. Explosive grenades are the most commonly used in modern warfare, and are designed to detonate after impact or after a set amount of time...
, thereby winning a wager with French
France
The French Republic , The French Republic , The French Republic , (commonly known as France , is a unitary semi-presidential republic in Western Europe with several overseas territories and islands located on other continents and in the Indian, Pacific, and Atlantic oceans. Metropolitan France...
General Maurice Sarrail
Maurice Sarrail
Maurice-Paul-Emmanuel Sarrail was a French general of the First World War. Sarrail endeared himself to the political elite of the Third Republic through his openly socialist views, all the more conspicuous in contrast to the Catholics, conservatives and monarchists who dominated the French Army...
. The remaining 19 bottles of expensive 1880 cognac she shared amongst the soldiers of her company.

She was awarded the French Légion d’Honneur (Legion of Honour) twice, Russia
Russia
Russia or , officially known as both Russia and the Russian Federation , is a country in northern Eurasia. It is a federal semi-presidential republic, comprising 83 federal subjects...
n Cross of St. George
Cross of St. George
thumb|Original Cross of St. George.Ist and 2nd class were in gold.The Cross of St. George ', or simply the George's Cross, was, until 1913, officially known as the Sign of Distinction of the Military Order of St. George....
, British medal of the Most Distinguished Order of St Michael
Order of St Michael and St George
The Most Distinguished Order of Saint Michael and Saint George is an order of chivalry founded on 28 April 1818 by George, Prince Regent, later George IV of the United Kingdom, while he was acting as Prince Regent for his father, George III....
, Serbian Miloš Obilić
Miloš Obilic
Miloš Obilić was a medieval Serbian knight in the service of Prince Lazar, during the invasion of the Ottoman Empire. He is not mentioned in contemporary sources, but he features prominently in later accounts of the Serbian defeat at the Battle of Kosovo as the legendary assassin of the Ottoman...
medal. She is the sole female recipient of the French Croix de Guerre
Croix de guerre
The Croix de guerre is a military decoration of France. It was first created in 1915 and consists of a square-cross medal on two crossed swords, hanging from a ribbon with various degree pins. The decoration was awarded during World War I, again in World War II, and in other conflicts...
1914-1918 (War Cross) with the palm attribute for service in World War I.

She was demobilised in 1919, and turned down an offer to move to France, where she was eligible to collect a comfortable French army pension. Instead, she choose to live in Belgrade
Belgrade
Belgrade is the capital and largest city of Serbia. It is located at the confluence of the Sava and Danube rivers, where the Pannonian Plain meets the Balkans. According to official results of Census 2011, the city has a population of 1,639,121. It is one of the 15 largest cities in Europe...
, dressed in women's clothes, again, married and postal worker and gave birth to a daughter.

Soon people forgot her merits, this as the political winds changed with the inauguration of Tito and she effectively was deemed persona non-grata in her own country and was forced into subsistence living - ekeing out an existence as a cleaning lady in the Državna hipotekarna Bank in Belgrade.

During the German occupation during the Second World War, Milunka refused to attend a banquet organised by Milan Nedić
Milan Nedic
Milan Nedić was a Serbian general and politician, he was the chief of the general staff of the Yugoslav Army, minister of war in the Royal Yugoslav Government and the prime minister of a Nazi-backed Serbian puppet government during World War II.After the war, Yugoslav communist authorities...
, the German generals and officers. She was arrested and taken to Banjica concentration camp
Banjica concentration camp
Banjica concentration camp was a quisling and Nazi German concentration camp in occupied Serbia from June 1941 to September 1944 in World War II, located in the eponymous suburb of Belgrade. It started as a center for holding hostages, but later included Jews, Serbs, Roma, captured partisans, and...
, where she was imprisoned for ten months.

By the 1950s she was widowed, her daughter was in hospital, and she was living in a crumbling house in Voždovac
Voždovac
Voždovac is an urban neighborhood and one of 17 municipalities which constitute the City of Belgrade, the capital of Serbia.- Location :...
with her three adopted children: Milka, a forgotten child from the railway station in Stalac; Radmila-Višnja; and Zorka, a fatherless girl from Dalmatia.

Later, when she attended the jubilee celebrations wearing her military medals, other military officers spoke with her and heard of her courageous actions. News spread and at last she gained the recognition she deserved. In 1972, public pressure and a newspaper article highlighting her difficult housing and financial situation led to her being given a small apartment by Belgrade City Assembly.

She died in Belgrade on 5 October 1973, aged 84, and was buried in New Cemetery, Belgrade
Novo groblje
Novo groblje is a cemetery complex in Belgrade, Serbia. It is located in Ruzveltova street in Zvezdara municipality. The cemetery was built in 1886 as the third Christian cemetery in Belgrade. The newly developed cemetery in that period had no chapel or church...
, in the Alley of Distinguished Citizens with the highest state and military honors. A street in Belgrade is named after her.
The source of this article is wikipedia, the free encyclopedia.  The text of this article is licensed under the GFDL.