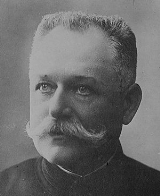 Encyclopedia
Maurice-Paul-Emmanuel Sarrail (1856–1929) was a French
France
The French Republic , The French Republic , The French Republic , (commonly known as France , is a unitary semi-presidential republic in Western Europe with several overseas territories and islands located on other continents and in the Indian, Pacific, and Atlantic oceans. Metropolitan France...
general of the First World War. Sarrail endeared himself to the political elite of the Third Republic
French Third Republic
The French Third Republic was the republican government of France from 1870, when the Second French Empire collapsed due to the French defeat in the Franco-Prussian War, to 1940, when France was overrun by Nazi Germany during World War II, resulting in the German and Italian occupations of France...
through his openly socialist
Socialism
Socialism is an economic system characterized by social ownership of the means of production and cooperative management of the economy; or a political philosophy advocating such a system. "Social ownership" may refer to any one of, or a combination of, the following: cooperative enterprises,...
views, all the more conspicuous in contrast to the Catholics
Roman Catholic Church
The Catholic Church, also known as the Roman Catholic Church, is the world's largest Christian church, with over a billion members. Led by the Pope, it defines its mission as spreading the gospel of Jesus Christ, administering the sacraments and exercising charity...
, conservatives
Conservatism
Conservatism is a political and social philosophy that promotes the maintenance of traditional institutions and supports, at the most, minimal and gradual change in society. Some conservatives seek to preserve things as they are, emphasizing stability and continuity, while others oppose modernism...
and monarchists
Monarchism
Monarchism is the advocacy of the establishment, preservation, or restoration of a monarchy as a form of government in a nation. A monarchist is an individual who supports this form of government out of principle, independent from the person, the Monarch.In this system, the Monarch may be the...
who dominated the French Army
French Army
The French Army, officially the Armée de Terre , is the land-based and largest component of the French Armed Forces.As of 2010, the army employs 123,100 regulars, 18,350 part-time reservists and 7,700 Legionnaires. All soldiers are professionals, following the suspension of conscription, voted in...
in the years prior to the war. Historians hold this, as much as—if not more than—any natural aptitude, as the reason for his rise to high command.

In 1914 he commanded the Third Army
Third Army (France)
The Third Army was a Field army of the French Army, which fought during World War I and World War II.-World War I:*General Ruffey *General Sarrail *General Humbert...
in the Ardennes
Ardennes
The Ardennes is a region of extensive forests, rolling hills and ridges formed within the Givetian Ardennes mountain range, primarily in Belgium and Luxembourg, but stretching into France , and geologically into the Eifel...
, but when mounting losses soured his early successes, Joseph Joffre
Joseph Joffre
Joseph Jacques Césaire Joffre OM was a French general during World War I. He is most known for regrouping the retreating allied armies to defeat the Germans at the strategically decisive First Battle of the Marne in 1914. His popularity led to his nickname Papa Joffre.-Biography:Joffre was born in...
, who personally disliked him, took the opportunity to dismiss him. The political uproar this caused on the Left led to him receiving command of the French Army of the Orient, which was despatched to Salonika in October 1915. In January 1916 he was granted command of all Allied
Allies of World War I
The Entente Powers were the countries at war with the Central Powers during World War I. The members of the Triple Entente were the United Kingdom, France, and the Russian Empire; Italy entered the war on their side in 1915...
forces in the Macedonia
Macedonia (region)
Macedonia is a geographical and historical region of the Balkan peninsula in southeastern Europe. Its boundaries have changed considerably over time, but nowadays the region is considered to include parts of five Balkan countries: Greece, the Republic of Macedonia, Bulgaria, Albania, Serbia, as...
n theatre. On December 10, 1916, Henry Descoin, the commander of the French garrison of Korçë, with the approval from Maurice Sarrail, declared the Autonomous Albanian Republic of Korçë
Autonomous Albanian Republic of Korçë
The Autonomous Albanian Republic of Korçë was an autonomous state established in 1916, by the local French forces, after the city of Korçë fell under their control, during World War I and lasted till 1920....
, and appointed Themistokli Gërmenji
Themistokli Gërmenji
Themistokli Gërmenji was one of the activists of the Albanian National Awakening, the leader of the Albanian irregulars from 1909 to 1914, and the prefect of police of Autonomous Albanian Republic of Korçë from 1916 to 1917.- Biography :...
as prefect
Prefect
Prefect is a magisterial title of varying definition....
.

Here Sarrail demonstrated a tendency toward interfering in politics, encouraging the Venizelist
Venizelism
Venizelism was one of the major political movements in Greece from the 1900s until the mid 1970s.- Ideology :Named after Eleftherios Venizelos, the key characteristics of Venizelism were:*Opposition to Monarchy...
coup against King Constantine of Greece
Constantine I of Greece
Constantine I was King of Greece from 1913 to 1917 and from 1920 to 1922. He was commander-in-chief of the Hellenic Army during the unsuccessful Greco-Turkish War of 1897 and led the Greek forces during the successful Balkan Wars of 1912–1913, in which Greece won Thessaloniki and doubled in...
. His only major offensive
Serbian Campaign (World War I)
The Serbian Campaign was fought from late July 1914, when Austria-Hungary invaded Serbia at the outset of the First World War, until late 1915, when the Macedonian Front was formed...
ended in failure, and only his political contacts saved his command. In December 1917, however, the new French premier, Georges Clemenceau
Georges Clemenceau
Georges Benjamin Clemenceau was a French statesman, physician and journalist. He served as the Prime Minister of France from 1906 to 1909, and again from 1917 to 1920. For nearly the final year of World War I he led France, and was one of the major voices behind the Treaty of Versailles at the...
, relieved him of command, and he took no further part in the war. When his political allies returned to power in 1924 he was despatched to Syria
French Mandate of Syria
Officially the French Mandate for Syria and the Lebanon was a League of Nations mandate founded after the First World War and the partitioning of the Ottoman Empire...
as high commissioner
High Commissioner
High Commissioner is the title of various high-ranking, special executive positions held by a commission of appointment.The English term is also used to render various equivalent titles in other languages.-Bilateral diplomacy:...
. He was recalled a year later, however, after he ordered the shelling of Damascus
Damascus
Damascus , commonly known in Syria as Al Sham , and as the City of Jasmine , is the capital and the second largest city of Syria after Aleppo, both are part of the country's 14 governorates. In addition to being one of the oldest continuously inhabited cities in the world, Damascus is a major...
during the Great Druze Revolt.