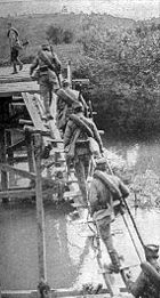 Encyclopedia
The Battle of Kolubara (3–9 December 1914) was a major victory of Serbia
Serbia
Serbia , officially the Republic of Serbia , is a landlocked country located at the crossroads of Central and Southeast Europe, covering the southern part of the Carpathian basin and the central part of the Balkans...
over the invading Austro-Hungarian armies during World War I
World War I
World War I , which was predominantly called the World War or the Great War from its occurrence until 1939, and the First World War or World War I thereafter, was a major war centred in Europe that began on 28 July 1914 and lasted until 11 November 1918...
. The invaders were routed, and driven back across the Serbian border.

Battle of Kolubara is one of the most important themes of all military academies
Military academy
A military academy or service academy is an educational institution which prepares candidates for service in the officer corps of the army, the navy, air force or coast guard, which normally provides education in a service environment, the exact definition depending on the country concerned.Three...
in the whole world. Main creator of Serbian victory, general and marshal Živojin Mišić
Živojin Mišic
Živojin Mišić OKS GCMG was a Vojvoda and the most successful Serbian commander who participated in all Serbia's wars from 1876 to 1918.-Early years:Misic's grandfather was born in Struganik near Mionica...
took his place in the arc of glory among the world's greatest military leaders.

After the Battle of Cer
Battle of Cer
The Battle of Cer also known as Battle of Jadar was one of the first battles of World War I, it also marked the first Allied victory in the war. The battle was fought between the Austro-Hungarian Army and Serbian forces. The results improved Serbian standing in the Alliance...
, the Serbian army retreated to the right bank of the Kolubara River
Kolubara River
The Kolubara , is the 123 km-long river in western Serbia; it is the eastern tributary to the Sava river.- Origin :...
. The Serbian Army had 250,000 poorly equipped soldiers and the Austro-Hungarians had a well-equipped force of 450,000 men. On 16 November 1914, the Austro-Hungarian Balkan Army group (5th and 6th Army), commanded by Field Marshal
Field Marshal
Field Marshal is a military rank. Traditionally, it is the highest military rank in an army.-Etymology:The origin of the rank of field marshal dates to the early Middle Ages, originally meaning the keeper of the king's horses , from the time of the early Frankish kings.-Usage and hierarchical...
Oskar Potiorek
Oskar Potiorek
Oskar Potiorek was an Austrian general who served as the Austro-Hungarian governor of Bosnia and Herzegovina between 1911 and 1914...
, launched an attack across the river. Potiorek's goal was to gain control over the railroad that led from Obrenovac
Obrenovac
Obrenovac is a town and municipality located in Serbia at 44°40′ North, 20°13′ East. Its name stems from last name "Obrenović" which in turn stems from name "Obren" in Serbian language. In 2003 the municipality has total population of 75,949...
to Valjevo
Valjevo
Valjevo is a city and municipality located in western Serbia. It is the center of the Kolubara District, which includes five other smaller municipalities with a total population of almost 180,000 people...
and to use it for supplying his troops instead of using muddy roads in Mačva
Macva
Mačva is a geographical region in Serbia, mostly situated in the northwest of Central Serbia. It is located in a fertile plain between the Sava and Drina rivers. The chief town of this region is Šabac. The modern Mačva District of Serbia is named after the region, although the region of Mačva...
. The 5th Army, which held the northern part of the front, captured the town of Lazarevac
Lazarevac
Lazarevac is a town and municipality located in Serbia at 44.22° North, 20.15° East. Its name stems from name of medieval Prince Lazar Hrebeljanovic. In 2002 the town has total population of 23,551. Lazarevac is one of Belgrade's 17 municipalities....
which was held by the Serbian 2nd Army. In the south, the 15th and 16th Corps of the 6th Army attacked the 1st Serbian Army, captured Mount Maljen
Mount Maljen
Maljen is a mountain in western Serbia, just south of the city of Valjevo. It is well-known as a summer and winter resort. The highest peak is Kraljev Sto, at 1,104 m above sea level, followed by Crni Vrh at 1,096 m. On Maljen is situated resort Divčibare with 3 hotels, 24 holiday camps,...
on 24 November, and put the Serbian left wing in a difficult situation. On 25 November, the Austro-Hungarian 5th Army pushed back the 2nd and 3rd Army, crossed the Ljig River and flanked the 1st Army.

Because the Serbian First Army
Serbian First Army
The Serbian First Army was a Serbian field army that fought during World War I.-August 1914:*First Army - staff in the village Rača**I Timok Infantry Division - Smederevska Palanka...
was in difficult situation, its general, Živojin Mišić
Živojin Mišic
Živojin Mišić OKS GCMG was a Vojvoda and the most successful Serbian commander who participated in all Serbia's wars from 1876 to 1918.-Early years:Misic's grandfather was born in Struganik near Mionica...
, wanted to abandon his current positions and retreat to a new position in front of the town of Gornji Milanovac
Gornji Milanovac
Gornji Milanovac is a town and municipality located in Serbia at 44.012691° North, 20.273572° East. Its name means "Upper Milanovac" while Milanovac stems from name "Milan" in the Serbian language. The population of town is 24,048.The city was founded in 1853...
. His plan was to delay combat, rest his troops, and then launch a counteroffensive. Putnik
Radomir Putnik
Radomir Putnik, also known as Vojvoda Putnik, OSS OCT OKS GCMG was a Serbian Field Marshal and Chief of General Staff in the Balkan Wars and World War I, and took part in all wars that Serbia waged from 1876 to 1917.-Biography:...
did not approve of the plan. He warned Mišić that in that case other armies would also have to retreat, and Belgrade
Belgrade
Belgrade is the capital and largest city of Serbia. It is located at the confluence of the Sava and Danube rivers, where the Pannonian Plain meets the Balkans. According to official results of Census 2011, the city has a population of 1,639,121. It is one of the 15 largest cities in Europe...
would have to be abandoned. Mišić told Putnik that the orders had already been given, and that he would not change them while he was in command. In the end, Putnik accepted the plan. 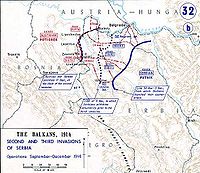 When Belgrade was abandoned, Potiorek made a new plan. He wanted to amass the entire 5th Army in the Belgrade region to annihilate the 2nd army, which was on the right wing of the Serbian front. The 5th Army would then turn to the south, get behind the Serbs, and force them to capitulate. Potiorek underestimated the offensive capabilities of Mišić's 1st Army in the south. He thought that they were too tired and weakened to do more than hold while his forces were maneuvering.

The Austro-Hungarian soldiers were very tired even before this maneuver began. While they were marching, Serbian troops were resting in their new positions. On the 2 December, Mišić finished all preparations for an attack. Putnik ordered the attack of the entire Serbian army on 3 December. That was an ideal moment, because the largest Austro-Hungarian formation, the Combined Corps, was by then out of combat, marching north.

On the 3 December, the 1st Army launched an attack against the surprised 16th Corps. The attack was supported by the Užice
Užice
Užice is a city and municipality in western Serbia, located at the banks of the Đetinja river. It is the administrative center of the Zlatibor District...
army from the left wing. 16th Corps suffered heavy casualties and was pushed back. On the 4 December, 17th Corps tried to hold the advance of the 1st Army, but failed. Potiorek ordered an attack of the 5th Army so that he could complete his operation before the 6th army is defeated. However, the Combined Corps was still on its march.

On the 5 December, the 1st Serbian Army captured Mount Suvobor
Suvobor
Suvobor is a mountain in central Serbia, near the town of Gornji Milanovac. Its highest peak Suvobor has an altitude of 866 meters above sea level....

44.1237°N 20.1759°E, the main defensive position of the 6th Austrian Army. Meanwhile, the 3rd Serbian army had failed to push the 15th Corps off of Mount Rudnik, and Užice army suffered heavy casualties. However, these formations pressured the Austro-Hungarian forces and helped the 1st Serbian Army to achieve a breakthrough. In the evening, the Combined Corps arrived at its new position with very tired soldiers.

On 6 December, Potiorek ordered the retreat of the 6th Army on the left bank of the Kolubara. Combined Corps finally attacked the 2nd Army, but the attack was easily stopped. The Combined Corps on the 8 December launched a major attack, but the 2nd Serbian Army managed to hold its position. Other units of the 5th Army under General Liborius Ritter von Frank
Liborius Ritter von Frank
Liborius Ritter von Frank was an Austro-Hungarian general in World War I. He commanded the Austrian fifth army in 1914 at the start of the war, and fought at the Battle of Cer, Battle of Drina and Battle of Kolubara...
were more successful, but it was too late. The 1st Serbian Army had captured Valjevo and was pushing north. Vojvoda Putnik reinforced the 2nd Serbian Army with fresh troops and ordered an attack before the Austro-Hungarians could fortify their positions. On 12 December, Stepanović's 2nd Serbian Army attacked and defeated the 8th Corps. The 5th Army had to leave Belgrade and cross the Sava River
Sava River
The Sava is a river in Southeast Europe, a right side tributary of the Danube river at Belgrade. Counting from Zelenci, the source of Sava Dolinka, it is long and drains of surface area. It flows through Slovenia, Croatia, along the northern border of Bosnia and Herzegovina, and through Serbia....
on 15 December. The battle was over.

The Serbian Army captured 76,000 enemy soldiers, and the number of Austro-Hungarian casualties was even greater. In complete route, the invading army abandoned large quantity of military equipment, according to some sources enough "to equip three army corps". Mišić was promoted to Vojvoda, while Potiorek was retired, replaced by Archduke Eugen of Austria
Archduke Eugen of Austria
Archduke Eugen Ferdinand Pius Bernhard Felix Maria of Austria-Teschen was an Archduke of Austria and a Prince of Hungary and Bohemia...
who was placed both in command of the 5th army and as commander in chief of the Balkan army group from December 1914.

Austria had taken massive losses and yet failed to conquer or defeat Serbia. Austro-Hungarian V and VI armies were driven out of the Serbian territory, abandoning Belgrade to the Serbs. Meanwhile it was under intense pressure from the Russian army on its eastern frontier.

Since Serbia did not really pose a threat to Austria, for the next 10 months the Austrians did nothing against Serbia and most of the forces in the area were transferred to the Italian front
Italian Campaign (World War I)
The Italian campaign refers to a series of battles fought between the armies of Austria-Hungary and Italy, along with their allies, in northern Italy between 1915 and 1918. Italy hoped that by joining the countries of the Triple Entente against the Central Powers it would gain Cisalpine Tyrol , the...
. On the other hand, although victorious, Serbian losses were even larger as a proportion of their army strength. Coupled with a terrible typhus
Typhus
Epidemic typhus is a form of typhus so named because the disease often causes epidemics following wars and natural disasters...
epidemic that raged through the countryside during the winter, Serbia remained on the defensive in 1915, hoping for increased Allied support which never came.