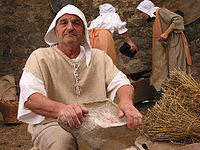 A miller usually refers to a person who operates a mill
Gristmill
The terms gristmill or grist mill can refer either to a building in which grain is ground into flour, or to the grinding mechanism itself.- Early history :...
, a machine to grind a cereal crop to make flour
Flour
Flour is a powder which is made by grinding cereal grains, other seeds or roots . It is the main ingredient of bread, which is a staple food for many cultures, making the availability of adequate supplies of flour a major economic and political issue at various times throughout history...
. Milling
Mill (grinding)
A grinding mill is a unit operation designed to break a solid material into smaller pieces. There are many different types of grinding mills and many types of materials processed in them. Historically mills were powered by hand , working animal , wind or water...
is among the oldest of human occupations. "Miller", "Milne" and other variants are common surnames, as are their equivalents in other languages around the world ("Müller
Müller
The German word Müller means "miller" . It is the most common family surname in Germany and Switzerland and the fifth most common surname in Austria . Other forms are "Miller" and "Möller"...
" or "Mueller
Mueller
Mueller is a spelling variant of the German surname Müller . In German, the letter "ü" can be replaced with "ue". It may refer to:-People:*Armin Mueller-Stahl , German actor*Barbara R...
" in German
German language
German is a West Germanic language, related to and classified alongside English and Dutch. With an estimated 90 – 98 million native speakers, German is one of the world's major languages and is the most widely-spoken first language in the European Union....
, "Molinari
Molinari
Molinari is a family name that may refer to any of several people.* Alfonsina Molinari, a Puerto Rican actress and opera singer* Anna Molinari an Italian fashion designer, founder of Blumarine and other brands in the Blufin group...
" in Italian
Italian language
Italian is a Romance language spoken mainly in Europe: Italy, Switzerland, San Marino, Vatican City, by minorities in Malta, Monaco, Croatia, Slovenia, France, Libya, Eritrea, and Somalia, and by immigrant communities in the Americas and Australia...
etc.). Milling existed in hunter gatherer communities, and later millers were important to the development of agriculture
History of agriculture
Agriculture was developed at least 10,000 years ago, and it has undergone significant developments since the time of the earliest cultivation. The Fertile Crescent of Western Asia, Egypt, and India were sites of the earliest planned sowing and harvesting of plants that had previously been gathered...
.

The materials ground by millers are often foodstuffs and particularly grain
Cereal
Cereals are grasses cultivated for the edible components of their grain , composed of the endosperm, germ, and bran...
. The physical grinding of the food allows for the easier digestion of its nutrients and saves wear on the teeth. Non-food substances needed in a fine, powdered form, such as building materials, may be processed by a miller.

The most basic tool for a miller was the quern-stone
Quern-stone
Quern-stones are stone tools for hand grinding a wide variety of materials. They were used in pairs. The lower, stationary, stone is called a quern, whilst the upper, mobile, stone is called a handstone...
- simply a large, fixed stone as a base and another movable stone operated by hand, similar to a mortar and pestle
Mortar and pestle
A mortar and pestle is a tool used to crush, grind, and mix solid substances . The pestle is a heavy bat-shaped object, the end of which is used for crushing and grinding. The mortar is a bowl, typically made of hard wood, ceramic or stone...
. As technology and millstones (the bedstone
Bedstone
Bedstone is a small village and civil parish in Shropshire, England, close to the borders of Herefordshire and Wales.The village is approximately 1½ miles from the railway stations at Hopton Heath and Bucknell and is situated just off the B4367 road.- Norman Origin :Its church dates back to...
and rynd
Rynd
A millrind or simply rind is an iron support, usually four-armed or cross-shaped, for the turning stone in a pair of millstones. It is sometimes spelled millrynd or rynd....
) improved, more elaborate machines such as watermill
Watermill
A watermill is a structure that uses a water wheel or turbine to drive a mechanical process such as flour, lumber or textile production, or metal shaping .- History :...
s and windmill
Windmill
A windmill is a machine which converts the energy of wind into rotational energy by means of vanes called sails or blades. Originally windmills were developed for milling grain for food production. In the course of history the windmill was adapted to many other industrial uses. An important...
s were developed to do the grinding work. These mills harnessed available energy sources including animal, water, wind and electrical power. Mills are some of the oldest factories in human history, so factories making other items are sometimes known as mills, for example, cotton mill
Cotton mill
A cotton mill is a factory that houses spinning and weaving machinery. Typically built between 1775 and 1930, mills spun cotton which was an important product during the Industrial Revolution....
s and steel mill
Steel mill
A steel mill or steelworks is an industrial plant for the manufacture of steel.Steel is an alloy of iron and carbon. It is produced in a two-stage process. First, iron ore is reduced or smelted with coke and limestone in a blast furnace, producing molten iron which is either cast into pig iron or...
s. These factory workers are also called millers.

The rynd
Rynd
A millrind or simply rind is an iron support, usually four-armed or cross-shaped, for the turning stone in a pair of millstones. It is sometimes spelled millrynd or rynd....
in pre-reformation Scotland
History of Scotland
The history of Scotland begins around 10,000 years ago, when humans first began to inhabit what is now Scotland after the end of the Devensian glaciation, the last ice age...
was often carved on millers' gravestones as a symbol of their trade.

In a traditional rural society, a miller is often wealthier than ordinary peasants, which can lead to jealousy and to millers being targeted in bread riots at times of famine. Conversely, millers might be in a stronger position vis-a-vis feudal land owners than are ordinary peasants.

The traditional carnival held annually in the city of Ivrea, Italy
Italy
Italy , officially the Italian Republic languages]] under the European Charter for Regional or Minority Languages. In each of these, Italy's official name is as follows:;;;;;;;;), is a unitary parliamentary republic in South-Central Europe. To the north it borders France, Switzerland, Austria and...
commemorates a spirited "Mugnaia" (miller's daughter) who supposedly refused to let a local duke exercise his right of the first night, and proceeded to chop the duke's head off and spark a revolution. Whatever the historical validity of the story, it is significant it was the daughter of a miller to whom folk tradition assigned this rebellious role.
The source of this article is wikipedia, the free encyclopedia.  The text of this article is licensed under the GFDL.