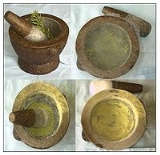 Overview
A mortar and pestle is a tool
Tool
A tool is a device that can be used to produce an item or achieve a task, but that is not consumed in the process. Informally the word is also used to describe a procedure or process with a specific purpose. Tools that are used in particular fields or activities may have different designations such...
used to crush, grind, and mix solid substances (trituration
Trituration
Trituration is the name of several different methods of processing materials. Trituration is also the name of the process for reducing the particle size of a substance by grinding, as by grinding of powders in a mortar with a pestle. Trituration additionally refers to the production of a...
). The pestle is a heavy bat-shaped object, the end of which is used for crushing and grinding. The mortar is a bowl, typically made of hard wood, ceramic or stone. The substance to be ground is placed in the mortar and ground, crushed or mixed with the pestle.
The English word mortar derives from classical Latin
Latin
Latin is an Italic language originally spoken in Latium and Ancient Rome. It, along with most European languages, is a descendant of the ancient Proto-Indo-European language. Although it is considered a dead language, a number of scholars and members of the Christian clergy speak it fluently, and...
mortarium, meaning, among several other usages, "receptacle for pounding" and "product of grinding or pounding".

What did Pharmacist's use before the mortar and pestle?

What is the best way to clean, and or prepare a mortar for use?

Who invented the mortar and pestle
More
x