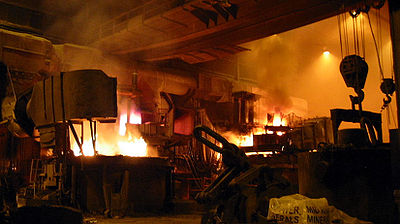 A steel mill or steelworks is an industrial plant for the manufacture of steel
Steel
Steel is an alloy that consists mostly of iron and has a carbon content between 0.2% and 2.1% by weight, depending on the grade. Carbon is the most common alloying material for iron, but various other alloying elements are used, such as manganese, chromium, vanadium, and tungsten...
.

An integrated steel mill has all the functions for primary steel production:

The principal raw materials for an integrated mill are iron ore, limestone, and coal (or coke). These materials are charged in batches into a blast furnace
Blast furnace
A blast furnace is a type of metallurgical furnace used for smelting to produce industrial metals, generally iron.In a blast furnace, fuel and ore and flux are continuously supplied through the top of the furnace, while air is blown into the bottom of the chamber, so that the chemical reactions...
where the iron compounds in the ore give up excess oxygen and become liquid iron. At intervals of a few hours, the accumulated liquid iron is tapped from the blast furnace and either cast into pig iron
Pig iron
Pig iron is the intermediate product of smelting iron ore with a high-carbon fuel such as coke, usually with limestone as a flux. Charcoal and anthracite have also been used as fuel...
or directed to other vessels for further steelmaking operations. Historically the Bessemer process
Bessemer process
The Bessemer process was the first inexpensive industrial process for the mass-production of steel from molten pig iron. The process is named after its inventor, Henry Bessemer, who took out a patent on the process in 1855. The process was independently discovered in 1851 by William Kelly...
was a major advancement in the production of economical steel, but it has now been entirely replaced by other processes such as the basic oxygen furnace.

Molten steel is cast into large blocks called "blooms". During the casting process various methods are used, such as addition of aluminum, so that impurities in the steel float to the surface where they can be cut off the finished bloom.

Because of the energy cost and structural stress associated with heating and cooling a blast furnace, typically these primary steelmaking vessels will operate on a continuous production campaign of several years duration. Even during periods of low steel demand, it may not be feasible to let the blast furnace grow cold, though some adjustment of the production rate is possible.

Integrated mills are large facilities that are typically only economical to build in 2,000,000 ton per year annual capacity and up. Final products made by an integrated plant are usually large structural sections, heavy plate, strip, wire rod, railway rails
Rail tracks
The track on a railway or railroad, also known as the permanent way, is the structure consisting of the rails, fasteners, sleepers and ballast , plus the underlying subgrade...
, and occasionally long products
Long steel products
Long Steel Products are made of either blooms or billets and are considered a semi-finished productLong products include bars, rods and wires, structural shapes and rails, and tubes....
such as bars
Structural steel
Structural steel is steel construction material, a profile, formed with a specific shape or cross section and certain standards of chemical composition and mechanical properties...
and pipe
Pipe (material)
A pipe is a tubular section or hollow cylinder, usually but not necessarily of circular cross-section, used mainly to convey substances which can flow — liquids and gases , slurries, powders, masses of small solids...
.

A major environmental hazard associated with integrated steel mills is the pollution produced in the manufacture of coke
Coke (fuel)
Coke is the solid carbonaceous material derived from destructive distillation of low-ash, low-sulfur bituminous coal. Cokes from coal are grey, hard, and porous. While coke can be formed naturally, the commonly used form is man-made.- History :...
, which is an essential intermediate product in the reduction of iron ore in a blast furnace.

Integrated mills may also adopt some of the processes used in mini-mills, such as arc furnaces and direct casting, to reduce production costs.

World integrated steel production capacity is at or close to world demand, so competition between suppliers results in only the most efficient producers remaining viable. However, due to the large employment of integrated plants, often governments will financially assist an obsolescent facility rather than take the risk of having thousands of workers thrown out of jobs.

A mini-mill is traditionally a secondary steel producer; however, Nucor
Nucor
Nucor Corporation , a Fortune 300 company headquartered in Charlotte, North Carolina, is one of the largest steel producers in the United States, and the largest of the "mini-mill" operators...
(one of the world's largest steel producers), as well as one of its competitors, Commercial Metals Company (CMC) use mini-mills exclusively. Usually it obtains most of its iron from scrap
Scrap
Scrap is a term used to describe recyclable and other materials left over from every manner of product consumption, such as parts of vehicles, building supplies, and surplus materials. Unlike waste, scrap has significant monetary value...
steel, recycled from used automobiles and equipment or byproducts of manufacturing. Direct reduced iron
Direct reduced iron
Direct-reduced iron , also called sponge iron, is produced from direct reduction of iron ore by a reducing gas produced from natural gas or coal. The reducing gas is a mixture majority of hydrogen and carbon monoxide which acts as reducing agent...
(DRI) is sometimes used with scrap, to help maintain desired chemistry of the steel, though usually DRI is too expensive to use as the primary raw steelmaking material. A typical mini-mill will have an electric arc furnace
Electric arc furnace
An electric arc furnace is a furnace that heats charged material by means of an electric arc.Arc furnaces range in size from small units of approximately one ton capacity up to about 400 ton units used for secondary steelmaking...
for scrap melting, a ladle furnace or vacuum furnace for precision control of chemistry, a strip or billet continuous caster
Continuous casting
Continuous casting, also called strand casting, is the process whereby molten metal is solidified into a "semifinished" billet, bloom, or slab for subsequent rolling in the finishing mills. Prior to the introduction of continuous casting in the 1950s, steel was poured into stationary molds to form...
for converting molten steel to solid form, a reheat furnace and a rolling mill.

Originally the mini-mill concept was adapted to production of bar products only, such as concrete
Concrete
Concrete is a composite construction material, composed of cement and other cementitious materials such as fly ash and slag cement, aggregate , water and chemical admixtures.The word concrete comes from the Latin word...
reinforcing bar
Rebar
A rebar , also known as reinforcing steel, reinforcement steel, rerod, or a deformed bar, is a common steel bar, and is commonly used as a tensioning device in reinforced concrete and reinforced masonry structures holding the concrete in compression...
, flats, angles, channels, pipe, and light rails. Since the late 1980s, successful introduction of the direct strip casting process has made mini-mill production of strip feasible. Often a mini-mill will be constructed in an area with no other steel production, to take advantage of local resources and lower-cost labour. Mini-mill plants may specialize, for example, making coils of rod for wire-drawing
Wire drawing
Wire drawing is a metalworking process used to reduce the cross-section of a wire by pulling the wire through a single, or series of, drawing die. There are many applications for wire drawing, including electrical wiring, cables, tension-loaded structural components, springs, paper clips, spokes...
use, or pipe, or in special sections for transportation and agriculture.

Since the electric arc furnace can be easily started and stopped on a regular basis, mini-mills can follow the market demand for their products easily, operating on 24 hour schedules when demand is high and cutting back production when sales are lower.