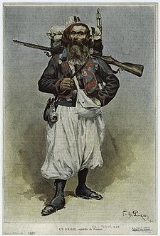 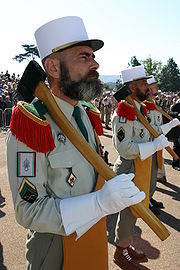 Military tradition is the specific set of practices associated with the military or soldiers in general. The concept may describe the styles of military uniform
Dress
A dress is a garment consisting of a skirt with an attached bodice or with a matching bodice giving the effect of a one-piece garment.Dress may also refer to:*Clothing in general*Costume, fancy dress...
, drill, or even the music
Music
Music is an art form whose medium is sound and silence. Its common elements are pitch , rhythm , dynamics, and the sonic qualities of timbre and texture...
of a military unit.

In Europe
Europe
Europe is, by convention, one of the world's seven continents. Comprising the westernmost peninsula of Eurasia, Europe is generally 'divided' from Asia to its east by the watershed divides of the Ural and Caucasus Mountains, the Ural River, the Caspian and Black Seas, and the waterways connecting...
, military tradition was a principle of the military
Military
A military is an organization authorized by its greater society to use lethal force, usually including use of weapons, in defending its country by combating actual or perceived threats. The military may have additional functions of use to its greater society, such as advancing a political agenda e.g...
that evolved out of the Middle Ages
Middle Ages
The Middle Ages is a periodization of European history from the 5th century to the 15th century. The Middle Ages follows the fall of the Western Roman Empire in 476 and precedes the Early Modern Era. It is the middle period of a three-period division of Western history: Classic, Medieval and Modern...
' concept of chivalry
Chivalry
Chivalry is a term related to the medieval institution of knighthood which has an aristocratic military origin of individual training and service to others. Chivalry was also the term used to refer to a group of mounted men-at-arms as well as to martial valour...
. 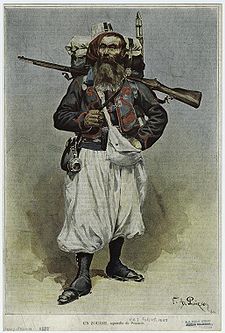 In Prussia
Prussia
Prussia was a German kingdom and historic state originating out of the Duchy of Prussia and the Margraviate of Brandenburg. For centuries, the House of Hohenzollern ruled Prussia, successfully expanding its size by way of an unusually well-organized and effective army. Prussia shaped the history...
and the German Empire
German Empire
The German Empire refers to Germany during the "Second Reich" period from the unification of Germany and proclamation of Wilhelm I as German Emperor on 18 January 1871, to 1918, when it became a federal republic after defeat in World War I and the abdication of the Emperor, Wilhelm II.The German...
, states relied on their own history as a state rather than as a regiment, while some specific regiments within elite formations did maintaining unit histories. For example, one regiment, the Potsdam Grenadiers, consisted of extremely tall men.

The French
France
The French Republic , The French Republic , The French Republic , (commonly known as France , is a unitary semi-presidential republic in Western Europe with several overseas territories and islands located on other continents and in the Indian, Pacific, and Atlantic oceans. Metropolitan France...
created the concept of Esprit de Corps, or pride in ones unit, within most elite or unique French units. North African units like the Zouaves, the Turcos, the French Foreign Legion
French Foreign Legion
The French Foreign Legion is a unique military service wing of the French Army established in 1831. The foreign legion was exclusively created for foreign nationals willing to serve in the French Armed Forces...
, or even the Mamelukes which served in Napoleon Bonaparte's Imperial Guard
Imperial Guard
The Imperial Guard was originally a small group of elite soldiers of the French Army under the direct command of Napoleon I, but grew considerably over time. It acted as his bodyguard and tactical reserve, and he was careful of its use in battle...
developed distinctive styles of dress which developed this. Many of these distinctive styles were later adopted by the French Metropolitan Army during the nineteenth century. 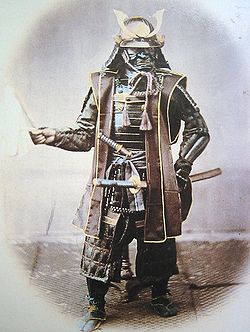 In Japan
Japan
Japan is an island nation in East Asia. Located in the Pacific Ocean, it lies to the east of the Sea of Japan, China, North Korea, South Korea and Russia, stretching from the Sea of Okhotsk in the north to the East China Sea and Taiwan in the south...
, most military tradition was based on the bushido
Bushido
, meaning "Way of the Warrior-Knight", is a Japanese word which is used to describe a uniquely Japanese code of conduct and a way of the samurai life, loosely analogous to the concept of chivalry. It originates from the samurai moral code and stresses frugality, loyalty, martial arts mastery, and...
code. Bushido, translated as 'way of the warrior' in English, was the strict code of military discipline adhered to by Samurai
Samurai
is the term for the military nobility of pre-industrial Japan. According to translator William Scott Wilson: "In Chinese, the character 侍 was originally a verb meaning to wait upon or accompany a person in the upper ranks of society, and this is also true of the original term in Japanese, saburau...
warriors.

Military Tradition is used in the strategy game Sid Meier's Civilization III, released by Atari
Atari
Atari is a corporate and brand name owned by several entities since its inception in 1972. It is currently owned by Atari Interactive, a wholly owned subsidiary of the French publisher Atari, SA . The original Atari, Inc. was founded in 1972 by Nolan Bushnell and Ted Dabney. It was a pioneer in...
, as a technological advance that allows the building of cavalry
Cavalry
Cavalry or horsemen were soldiers or warriors who fought mounted on horseback. Cavalry were historically the third oldest and the most mobile of the combat arms...
units.

Military Tradition is a game concept in strategy game Europa Universalis III
Europa Universalis III
Europa Universalis III is a grand strategy computer game by Paradox Interactive. The main game was released for Windows on January 2007, and was later ported to Mac OS X by Virtual Programming on 2 November 2007....
released by Swedish
Sweden
Sweden , officially the Kingdom of Sweden , is a Nordic country on the Scandinavian Peninsula in Northern Europe. Sweden borders with Norway and Finland and is connected to Denmark by a bridge-tunnel across the Öresund....
PC strategy game
Strategy game
A strategy game or strategic game is a game in which the players' uncoerced, and often autonomous decision-making skills have a high significance in determining the outcome...
designer, Paradox Interactive
Paradox Interactive
-External links:*...
. In the game player-controlled faction can accumulate Military Tradition by engaging in land battle. A higher Military Tradition value results in the ability to recruit generals and conquistadors of better quality.

Distinct elements of a military culture are also present in many fictional publications. These are often used as an important element in shaping fictional culture by authors.
The source of this article is wikipedia, the free encyclopedia.  The text of this article is licensed under the GFDL.