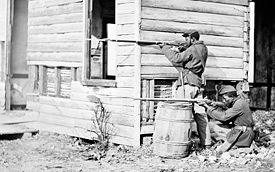 In military combat, the concept of cover refers to anything which is capable of physically protecting an individual from enemy fire. This differentiates it from the similar concept of concealment
Concealment
Hiding is obscuring something from view or rendering it inconspicuous.Concealment is obscuring something from view or rendering it inconspicuous, the opposite of exposure...
, in that an object or area of concealment only affords the benefit of stealth, not actual protection from small arms
Small arms
Small arms is a term of art used by armed forces to denote infantry weapons an individual soldier may carry. The description is usually limited to revolvers, pistols, submachine guns, carbines, assault rifles, battle rifles, multiple barrel firearms, sniper rifles, squad automatic weapons, light...
fire or artillery fragments
Artillery
Originally applied to any group of infantry primarily armed with projectile weapons, artillery has over time become limited in meaning to refer only to those engines of war that operate by projection of munitions far beyond the range of effect of personal weapons...
. An example of "cover vs. concealment" would be sandbags vs. tall grass.

In some military services (especially in the United States), a uniform hat is sometimes referred to officially as a cover, as in "Soldier, remove your cover!" or "You're not in uniform without your cover."

It is a convention in the US Army that an armed soldier must wear cover while indoors to indicate that they are under arms.