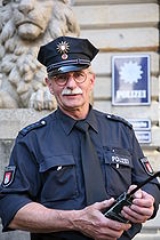 Overview
The police is a personification of the state
Sovereign state
A sovereign state, or simply, state, is a state with a defined territory on which it exercises internal and external sovereignty, a permanent population, a government, and the capacity to enter into relations with other sovereign states. It is also normally understood to be a state which is neither...
designated to put in practice the enforced law, protect property
Property
Property is any physical or intangible entity that is owned by a person or jointly by a group of people or a legal entity like a corporation...
and reduce civil disorder
Civil disorder
Civil disorder, also known as civil unrest or civil strife, is a broad term that is typically used by law enforcement to describe one or more forms of disturbance caused by a group of people. Civil disturbance is typically a symptom of, and a form of protest against, major socio-political problems;...
in civilian matters. Their powers include the legitimized use of force. The term is most commonly associated with police services of a state
State (polity)
A state is an organized political community, living under a government. States may be sovereign and may enjoy a monopoly on the legal initiation of force and are not dependent on, or subject to any other power or state. Many states are federated states which participate in a federal union...
that are authorized to exercise the police power
Police power
In United States constitutional law, police power is the capacity of the states to regulate behavior and enforce order within their territory for the betterment of the general welfare, morals, health, and safety of their inhabitants...
of that state within a defined legal or territorial area of responsibility. Police forces are often defined as organizations separate from any military forces, or other organizations involved in the defense of the state against foreign aggressors; however, gendarmerie
Gendarmerie
A gendarmerie or gendarmery is a military force charged with police duties among civilian populations. Members of such a force are typically called "gendarmes". The Shorter Oxford English Dictionary describes a gendarme as "a soldier who is employed on police duties" and a "gendarmery, -erie" as...
and military police
Military police
Military police are police organisations connected with, or part of, the military of a state. The word can have different meanings in different countries, and may refer to:...
are military units charged with policing.

Law enforcement, however, constitutes only part of policing activity.

Does police have the right to scare and harass ordinary people especially through text messaging?
More
x