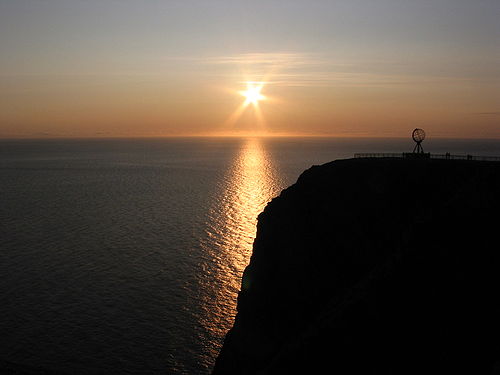 The opposite phenomenon, polar night
Polar night
The polar night occurs when the night lasts for more than 24 hours. This occurs only inside the polar circles. The opposite phenomenon, the polar day, or midnight sun, occurs when the sun stays above the horizon for more than 24 hours.-Description:...
, occurs in winter when the sun stays below the horizon
Horizon
The horizon is the apparent line that separates earth from sky, the line that divides all visible directions into two categories: those that intersect the Earth's surface, and those that do not. At many locations, the true horizon is obscured by trees, buildings, mountains, etc., and the resulting...
throughout the day.

Since the Earth's axis is tilted with respect to the ecliptic
Ecliptic
The ecliptic is the plane of the earth's orbit around the sun. In more accurate terms, it is the intersection of the celestial sphere with the ecliptic plane, which is the geometric plane containing the mean orbit of the Earth around the Sun...
by approximately 23 degrees 27 minutes, the sun does not set at high latitudes in (local) summer. The duration of the midnight sun increases from one day during the summer solstice
Solstice
A solstice is an astronomical event that happens twice each year when the Sun's apparent position in the sky, as viewed from Earth, reaches its northernmost or southernmost extremes...
at the polar circle
Polar circle
A polar circle is either the Arctic Circle or the Antarctic Circle. On Earth, the Arctic Circle is located at a latitude of  N, and the Antarctic Circle is located at a latitude of  S....
to approximately six months at the poles. At extreme latitudes, it is usually referred to as polar day. The length of the time the sun is above the horizon varies from couple of days at the Arctic Circle and Antarctic Circle to 186 days at the poles
Geographical pole
A geographical pole is either of the two points—the north pole and the south pole—on the surface of a rotating planet where the axis of rotation meets the surface of the body...
.

At the poles themselves, the sun only rises once and sets once each year. During the six months when the sun is above the horizon at the poles, the sun spends the days constantly moving around the horizon, reaching its highest circuit of the sky at the summer solstice.

Due to refraction, the midnight sun may be experienced at latitudes slightly below the polar circle, though not exceeding one degree (depending on local conditions). For example, it is possible to experience the midnight sun in Iceland, even though most of it (Grímsey
Grímsey
Grímsey is a small island in the country of Iceland, off the north coast of the main island of Iceland and straddling the Arctic Circle. In January 2011 it had 86 inhabitants....
being a notable exception) is slightly south of the Arctic Circle. Even the northern extremities of Scotland
Scotland
Scotland is a country that is part of the United Kingdom. Occupying the northern third of the island of Great Britain, it shares a border with England to the south and is bounded by the North Sea to the east, the Atlantic Ocean to the north and west, and the North Channel and Irish Sea to the...
(and those places on similar latitudes) experience a permanent "dusk" or glare in the northern skies at these times.

For purposes of this article, the term "midnight sun" refers to the phenomena of 24 consecutive hours of sunlight north of the Arctic Circle or south of the Antarctic Circle. There are, however, some instances which are sometimes referred to as "midnight sun", even though they are in reality due to meandering time zones and the observance of daylight saving time
Daylight saving time
Daylight saving time —also summer time in several countries including in British English and European official terminology —is the practice of temporarily advancing clocks during the summertime so that afternoons have more daylight and mornings have less...
. For instance, in Fairbanks, Alaska
Fairbanks, Alaska
Fairbanks is a home rule city in and the borough seat of the Fairbanks North Star Borough in the U.S. state of Alaska.Fairbanks is the largest city in the Interior region of Alaska, and second largest in the state behind Anchorage...
, which is located south of the Arctic Circle, the sun sets at 12:47 a.m. on the Summer Solstice
Summer solstice
The summer solstice occurs exactly when the axial tilt of a planet's semi-axis in a given hemisphere is most inclined towards the star that it orbits. Earth's maximum axial tilt to our star, the Sun, during a solstice is 23° 26'. Though the summer solstice is an instant in time, the term is also...
. This is because Fairbanks is one hour ahead of its idealized time zone
Time zone
A time zone is a region on Earth that has a uniform standard time for legal, commercial, and social purposes. In order for the same clock time to always correspond to the same portion of the day as the Earth rotates , different places on the Earth need to have different clock times...
(due to meandering for the purpose of keeping most of the state on one time zone) and because the state of Alaska
Alaska
Alaska is the largest state in the United States by area. It is situated in the northwest extremity of the North American continent, with Canada to the east, the Arctic Ocean to the north, and the Pacific Ocean to the west and south, with Russia further west across the Bering Strait...
observes daylight saving time. This means that solar culmination occurs at roughly 2 p.m. instead of at 12 noon, as in most places. Conversely, astronomical midnight occurs at 2 a.m. In Bethel
Bethel, Alaska
Bethel is a city located near the west coast of the U.S. state of Alaska, west of Anchorage. Accessible only by air and river, Bethel is the main port on the Kuskokwim River and is an administrative and transportation hub for the 56 villages in the Yukon-Kuskokwim Delta.Bethel is the largest...
, which is further south than Anchorage
Anchorage, Alaska
Anchorage is a unified home rule municipality in the southcentral part of the U.S. state of Alaska. It is the northernmost major city in the United States...
, the sun sets on the Summer Solstice at 12:24 a.m. for the same reasons. These examples are not true midnight sun phenomena, however, since the sun is below the horizon on every day of the year at the local astronomical midnight.

Locations above 60 degrees latitude that are south of the Arctic Circle or north of the Antarctic Circle experience midnight twilight
Twilight
Twilight is the time between dawn and sunrise or between sunset and dusk, during which sunlight scattering in the upper atmosphere illuminates the lower atmosphere, and the surface of the earth is neither completely lit nor completely dark. The sun itself is not directly visible because it is below...
instead. The sun is at the horizon to 6 degrees below the horizon, so that daytime activities, such as reading, are still possible without artificial light, if it is not cloudy.

White Nights have become a common symbol of Saint Petersburg
Saint Petersburg
Saint Petersburg is a city and a federal subject of Russia located on the Neva River at the head of the Gulf of Finland on the Baltic Sea...
, Russia
Russia
Russia or , officially known as both Russia and the Russian Federation , is a country in northern Eurasia. It is a federal semi-presidential republic, comprising 83 federal subjects...
, where they occur from about 11 June to 2 July, and the last 10 days of June are celebrated with cultural events.


When to see the midnight sun

At North Cape
North Cape, Norway
North Cape is a cape on the island of Magerøya in Northern Norway, in the municipality of Nordkapp. Its 307 m high, steep cliff is often referred to as the northernmost point of Europe, located at , 2102.3 km from the North Pole. However, the neighbouring point Knivskjellodden is actually...
, Norway
Norway
Norway , officially the Kingdom of Norway, is a Nordic unitary constitutional monarchy whose territory comprises the western portion of the Scandinavian Peninsula, Jan Mayen, and the Arctic archipelago of Svalbard and Bouvet Island. Norway has a total area of and a population of about 4.9 million...
, known as the northernmost point of Continental Europe
Continental Europe
Continental Europe, also referred to as mainland Europe or simply the Continent, is the continent of Europe, explicitly excluding European islands....
this period extends approximately from May 14 to July 29. On the Svalbard
Svalbard
Svalbard is an archipelago in the Arctic, constituting the northernmost part of Norway. It is located north of mainland Europe, midway between mainland Norway and the North Pole. The group of islands range from 74° to 81° north latitude , and from 10° to 35° east longitude. Spitsbergen is the...
archipelago further north this period extends from April 20 to August 22.

ADHD symptoms could be caused by this, changing attention spans for people that have to rush through the little daylight at night and the irritability and hyperactivity of continuous sunlight.

The midnight sun also poses special challenges to religious people such as Jewish people who have religious rites based around the 24 hour day/night cycle. In the Jewish community this has given rise to a body of Jewish law in the polar regions
Jewish law in the polar regions
The observance of Jewish law in the polar regions of Earth presents unique problems. Many mitzvot, such as Jewish prayer and the Jewish sabbath, rely on the consistent cycle of day and night in 24-hour periods that is commonplace in most of the world...
, which attempts to deal with the special challenges of adhering to the Mitzvah
Mitzvah
The primary meaning of the Hebrew word refers to precepts and commandments as commanded by God...
in such conditions. Another related religion that suffers from this is Islam, where fasting during daylight hours in ramadan
Ramadan
Ramadan is the ninth month of the Islamic calendar, which lasts 29 or 30 days. It is the Islamic month of fasting, in which participating Muslims refrain from eating, drinking, smoking and sex during daylight hours and is intended to teach Muslims about patience, spirituality, humility and...
would imply total abstinence.