Encyclopedia
The Design District, historically a part of the Buena Vista, is a neighborhood of greater Midtown
Midtown Miami
Midtown Miami is the collective term for the Wynwood and Edgewater neighborhoods of Miami, Florida, United States, north of Downtown and south of the Miami Design District. It is roughly bound by North 29th Street to the south, I-195 to the north, I-95 to the west and Biscayne Bay to the east.In...
, Miami, Florida
Florida
Florida is a state in the southeastern United States, located on the nation's Atlantic and Gulf coasts. It is bordered to the west by the Gulf of Mexico, to the north by Alabama and Georgia and to the east by the Atlantic Ocean. With a population of 18,801,310 as measured by the 2010 census, it...
, United States
United States
The United States of America is a federal constitutional republic comprising fifty states and a federal district...
, south of Little Haiti
Little Haiti
Little Haiti or La Petite Haïti, and traditionally known as Lemon City, is a neighborhood in Miami, Florida, United States known as a traditional center for Haitian immigrants, and Francophone culture in the city.-Lemon City, early farming days:...
. It is roughly bound by North 36th Street (US 27) to the south, North 43rd Street to the north, West First Avenue to the west and Biscayne Boulevard to the east.

The Design District is made up primarily of old low-rise
Low-rise
A low-rise is a building that is only a few stories tall.There is no universally accepted height requirement for a building to be considered a low-rise...
warehouse
Warehouse
A warehouse is a commercial building for storage of goods. Warehouses are used by manufacturers, importers, exporters, wholesalers, transport businesses, customs, etc. They are usually large plain buildings in industrial areas of cities and towns. They usually have loading docks to load and unload...
s and gallery spaces, that have been reconverted into retail spaces, art galleries, restaurants and cafés. The Design District is in the crossroads of many prominent Miami neighborhoods, with the artsy Wynwood neighborhood to the south, Little Haiti
Little Haiti
Little Haiti or La Petite Haïti, and traditionally known as Lemon City, is a neighborhood in Miami, Florida, United States known as a traditional center for Haitian immigrants, and Francophone culture in the city.-Lemon City, early farming days:...
and the historic 1920s Buena Vista neighborhood to the north, and the wealthy Upper East Side neighborhoods to the east. After decades of falling to urban decay
Urban decay
Urban decay is the process whereby a previously functioning city, or part of a city, falls into disrepair and decrepitude...
, the Design District has risen to fame as a destination for the arts, design
Design
Design as a noun informally refers to a plan or convention for the construction of an object or a system while “to design” refers to making this plan...
, and fashion
Fashion
Fashion, a general term for a currently popular style or practice, especially in clothing, foot wear, or accessories. Fashion references to anything that is the current trend in look and dress up of a person...
.

It is home to over 130 art galleries, showrooms, creative services, architecture firms, stores, antiques dealers, eateries and bars. Every 2nd Saturday of each month a community wide Art & Design Night is held from 7-10 pm. A popular event, Art Galleries and Design Showrooms open their doors to the public for music and refreshments.

Credited to starting the district is Craig Robins, who purchased many run-down buildings in the 18 square block area and persuaded many top designers, such as Alison Spear, Holly Hunt and Peter Page to relocate.

In 2009, the first luxury retailer opened in the Design District, Christian Louboutin
Christian Louboutin
Christian Louboutin is a French footwear designer whose father is cabinetmaker Roger Louboutin and homemaker mother Irene. His siblings include three sisters, no brothers. Landscape architect Louis Benech has been his partner since 1997. Louboutin launched his line of high-end women's shoes in...
, marking a new era for the Design District. Later that year, Yohji Yamamoto
Yohji Yamamoto
Yōji Yamamoto , is an award winning Japanese fashion designer based in Tokyo and Paris. Yohji is considered to be among the master tailors whose work is thought to be of fashion genius and he has been described by Julie Gilhart, fashion director for Barney's New York as probably the only designer...
opened in the Design District. In 2011, Louis Vuitton
Louis Vuitton
Louis Vuitton Malletier – commonly referred to as Louis Vuitton , or shortened to LV – is a French fashion house founded in 1854 by Louis Vuitton. The label is well known for its LV monogram, which is featured on most products, ranging from luxury trunks and leather goods to ready-to-wear, shoes,...
announced plans to open a Louis Vuitton store in the neighborhood by 2014 after announcing its closure of its Bal Harbour Shops
Bal Harbour Shops
Bal Harbour Shops is an upscale open-air shopping mall in Bal Harbour, a wealthy suburb of Miami, Florida, known internationally for its collection of luxury retail. Bal Harbour Shops is one of the few remaining family-owned malls in the nation...
store (the first Louis Vuitton store to open outside of New York City
New York City
New York is the most populous city in the United States and the center of the New York Metropolitan Area, one of the most populous metropolitan areas in the world. New York exerts a significant impact upon global commerce, finance, media, art, fashion, research, technology, education, and...
), along with opening other brands from the LVMH
LVMH
LVMH Moët Hennessy • Louis Vuitton S.A., better known as LVMH, is a French multinational luxury goods conglomerate headquartered in Paris, Île-de-France, France. The company was formed after the 1987 merger of fashion house Louis Vuitton with Moët Hennessy, a company formed after the 1971 merger...
company in the Design District, including stores such as Sephora
Sephora
Sephora is a chain of cosmetics stores founded in France in 1970 and acquired by Paris-based conglomerate LVMH in 1997. The Sephora chain includes more than 750 stores in 17 countries...
, Marc Jacobs
Marc Jacobs
Marc Jacobs is an American fashion designer. He is the head designer for Marc Jacobs, as well as Marc by Marc Jacobs, a diffusion line, with more than 200 retail stores in 60 countries. He has been the creative director of the French design house Louis Vuitton since 1997...
, Givenchy
Givenchy
Givenchy is a French brand of clothing, accessories, perfumes and cosmetics with Parfums Givenchy.The house of Givenchy was founded in 1952 by designer Hubert de Givenchy and is a member of Chambre Syndicale de la Haute Couture et du Pret-a-Porter...
, and Fendi
Fendi
Fendi is an Italian high fashion house best known for its "baguette" handbags. It was launched in 1925 as a fur and leather shop in Rome, but today is a multinational luxury goods brand owned by LVMH...
.

One of the largest developers in the Design District, Craig Robins, plans to bring 40 to 50 luxury retailers to the neighborhood by 2014, competing with long-established Miami shopping areas such as Lincoln Road
Lincoln Road
Lincoln Road is a pedestrian road running east-west between 16th Street and 17th Street in Miami Beach, Florida, United States. Once open to vehicular traffic, it now hosts a pedestrian row of shops, restaurants, galleries, and other businesses between Washington Avenue and Alton...
and Bal Harbour Shops
Bal Harbour Shops
Bal Harbour Shops is an upscale open-air shopping mall in Bal Harbour, a wealthy suburb of Miami, Florida, known internationally for its collection of luxury retail. Bal Harbour Shops is one of the few remaining family-owned malls in the nation...
.

In October 2011, Hermes
Hermes
Hermes is the great messenger of the gods in Greek mythology and a guide to the Underworld. Hermes was born on Mount Kyllini in Arcadia. An Olympian god, he is also the patron of boundaries and of the travelers who cross them, of shepherds and cowherds, of the cunning of thieves, of orators and...
, Cartier
Cartier
-Places:* Cartier Island, an island north-west of Australia that is part of Australia's Northern Territory* Cartier, Manitoba, a rural municipality in Canada* Cartier, Ontario, a small town in Northern Ontario* Cartier , Quebec-Other uses:...
and Dior
Dior
Dior can mean:* Christian Dior SA, a French clothing retailer* In J. R. R. Tolkien's fictional Middle-earth legendarium:**Dior Eluchíl, a Half-elven of the First Age**Dior , a Steward of GondorDior is a surname, and may refer to:...
announced plans to move their stores from Bal Harbour Shops to the Design District in late 2011 and 2012. 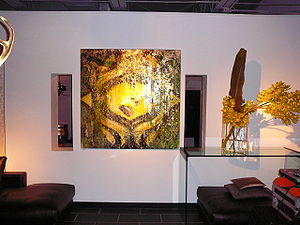 There are a lot of new galleries and showrooms in the Design District.