Encyclopedia
Metrobus Nationwide is a privately owned public transport
Public transport
Public transport is a shared passenger transportation service which is available for use by the general public, as distinct from modes such as taxicab, car pooling or hired buses which are not shared by strangers without private arrangement.Public transport modes include buses, trolleybuses, trams...
company in the Klang Valley
Klang Valley
Klang Valley is an area in Malaysia comprising Kuala Lumpur and its suburbs, and adjoining cities and towns in the state of Selangor. An alternative reference to this would be Kuala Lumpur Metropolitan Area or Greater Kuala Lumpur. It is geographically delineated by Titiwangsa Mountains to the...
that was formed in 1992. It is based in Subang Jaya
Subang Jaya
Subang Jaya is a suburban city in the Klang Valley, Selangor, Malaysia. It comprises the southern third of the district of Petaling, and is home to a third of the district population of 1.78 million. Subang Jaya comprises , Bandar Sunway, UEP Subang Jaya, Putra Heights and Batu Tiga...
. It is the second largest stage bus (regular or trunk bus route) and feeder bus operator in Kuala Lumpur
Kuala Lumpur
Kuala Lumpur is the capital and the second largest city in Malaysia by population. The city proper, making up an area of , has a population of 1.4 million as of 2010. Greater Kuala Lumpur, also known as the Klang Valley, is an urban agglomeration of 7.2 million...
after Rapid KL
Rapid KL
RapidKL, short for Rangkaian Pengangkutan Integrasi Deras Sdn Bhd, is a government-owned company which was formed in 2004 as part of the restructuring of the public transport system in Kuala Lumpur, Malaysia's capital....
. Metrobus Natiowide owns a huge fleet of Nissan Diesel, Hino
Hino Motors
-External links:Global* * * Overseas offices****.*.***.*.* - Philippines**...
and Mercedez Benz
Mercedes-Benz buses
Mercedes-Benz has been making buses since 1895 in Mannheim in Germany. Since 1995, the brand of Mercedes-Benz buses and coaches is under the umbrella of EvoBus GmbH, belonging 100 % to the Daimler AG.-Heritage:...
buses to serve all its routes. 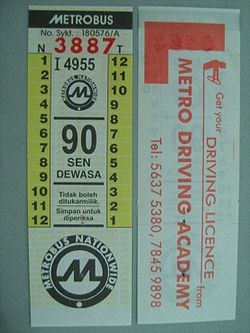 Zone 1 is the city center. Zone 1 charges are normally applied when a passenger travels within a zone. Whenever the passenger travels in zones 2, 3 and 4, they will still be charged RM 1.00. Zone 2 charges occur when a passenger travels from a zone to the next zone, such as Zone 1-2, or zone 2-3, or zone 3-4 and vice versa. Zone 3 charges apply when travelling two zones across, such as from zone 1-3 or zone 2-4 while zone 4 charges (seldom used) are when one travels from the first zone to the fourth zone, which would be from the city center to the remote areas.