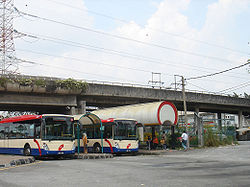 RapidKL bus is the largest bus operator in the Klang Valley
Klang Valley
Klang Valley is an area in Malaysia comprising Kuala Lumpur and its suburbs, and adjoining cities and towns in the state of Selangor. An alternative reference to this would be Kuala Lumpur Metropolitan Area or Greater Kuala Lumpur. It is geographically delineated by Titiwangsa Mountains to the...
, Malaysia. As of 2008, it operates 167 routes with 650 buses covering 980 residential areas with a ridership of about 400,000 per day.

In January 2006, RapidKL began its total revamp of the bus routes previously operated by Intrakota and Cityliner which the company inherited. When RapidKL took over operations from the two companies in October 2003, it operated 98 stage bus routes and 39 feeder bus services.

The revamp involved redrawing all its routes and reorganising them based on the "hub and spoke" concept. Four types of bus services were created, namely express routes (EKSPRES), city shuttles (BANDAR), trunk routes (UTAMA) and local shuttles (TEMPATAN).

Express route services operate from point-to-point without or with very few stops in between. City shuttles operate within Kuala Lumpur
Kuala Lumpur
Kuala Lumpur is the capital and the second largest city in Malaysia by population. The city proper, making up an area of , has a population of 1.4 million as of 2010. Greater Kuala Lumpur, also known as the Klang Valley, is an urban agglomeration of 7.2 million...
's central business district, linking five city bus hubs. Trunk route buses run from these hubs to suburban or regional hubs and stop at all regulated bus stops along the way. Local shuttles operate from suburban or regional hubs into residential areas.

According to RapidKL, there are in total three express route services, 15 city shuttle services, 19 trunk route services and 140 local shuttle routes in total. As of September 2006, RapidKL had 849 buses operating on these routes.

RapidKL has also divided up the Klang Valley into six areas and the bus route numbering system to a large extent follows the zone numbers.

The revamp has been met with mixed feelings from commuters.


Arguments in favour of the revamp


Criticisms of the revamp

In October 2003, SPNB
Syarikat Prasarana Negara Berhad
Syarikat Prasarana Negara Berhad is a 100% government-owned company which was set up to own the assets of several public transport services in Kuala Lumpur, the capital of Malaysia, under the government's move to restructure the city's public transport system...
bought over Intrakota Komposit and its subsidiaries from DRB-Hicom for RM177mil. It also paid RM14mil cash for the 364 buses belonging to Cityliner. The original companies were appointed interim operators.

RapidKL began the first phase of the revamp of its bus network in January 2006 by introducing 15 City Shuttle bus routes which serve major areas in the central business district of Kuala Lumpur
Kuala Lumpur
Kuala Lumpur is the capital and the second largest city in Malaysia by population. The city proper, making up an area of , has a population of 1.4 million as of 2010. Greater Kuala Lumpur, also known as the Klang Valley, is an urban agglomeration of 7.2 million...
. The buses run between four hubs at the edge of the central business district, namely KL Sentral, Titiwangsa, KLCC and Maluri, and Medan Pasar
Medan Pasar bus hub
Medan Pasar bus hub is a major bus interchange in Kuala Lumpur. It is a 200 m walk away from Masjid Jamek LRT station.This bus hub is served by rapidKL buses as well as other private bus operators such as Metrobus Nationwide & Selangor Omnibus Company Limited which operates the area of Kepong &...
in the city centre. These bus hubs also serve as rail interchanges, with the exception of Medan Pasar, although it is at a walking distance from Masjid Jamek LRT station
Masjid Jamek LRT station
Masjid Jamek LRT station is a rapid transit station in Kuala Lumpur, Malaysia. It is the interchange station between two of RapidKL's light rail transit lines, namely the Ampang Line and the Kelana Jaya Line...
.

In March 2006, RapidKL revamped the bus network serving Kepong, Selayang, Gombak, Batu Caves, Bandar Sri Damansara and Bandar Manjalara areas which it called Area 2. The areas are now service by four Trunk Routes and 35 Local Shuttle routes when fully implemented. The four trunk routes all begin from the Titiwangsa hub where passengers can change to City Shuttles. At the other end, the trunk routes serve regional hubs where Local Shuttles fan out into the residential suburbs.

On 30 April 2006, the bus network in Area 3 covering Setapak, Ulu Kelang, Wangsa Maju, Keramat, Ampang and Pandan was revamped. Three trunk bus routes serve this area, one from Titiwangsa and two from KLCC while 26 local shuttle routes complete the network for this area.

On 1 July 2006, two express services, four trunk lines and 32 local services were introduced in Area 4. It covers areas including Cheras, Serdang
Serdang
The state of Serdang was an ancient Malay-Indonesian monarchy, neighboring the Sultanate of Deli, to which it lost some territory.-Rulers:*1728 - 1782 Tuanku Umar Johan Pahlawan Alam Shah bin Tuanku Panglima Paderap [Kejeruan Junjungan], Raja of Serdang...
, Kajang
Kajang
Kajang, is a town in the eastern part of Selangor, Malaysia. Kajang is the district capital of Hulu Langat. It is located from of Malaysia's capital, Kuala Lumpur.The current locational gravity of growth in Kajang would be Sungai Chua...
, Balakong
Balakong
Balakong is a huge township in Selangor, Malaysia. Balakong is situated exactly at the boundary of Kajang and Cheras. The township consists mainly of residential condominiums,office complexes and factories.-Name:...
, Putrajaya
Putrajaya
Putrajaya is a planned city, located 25km south of Kuala Lumpur, that serves as the federal administrative centre of Malaysia. The seat of government was shifted in 1999 from Kuala Lumpur to Putrajaya, due to the overcrowding and congestion in the Kuala Lumpur areas...
, Cyberjaya
Cyberjaya
Cyberjaya is a town with a science park as the core that forms a key part of the Multimedia Super Corridor in Malaysia. It is located in the district of Sepang, Selangor and is situated about 50 km south of Kuala Lumpur, the capital of Malaysia...
and Bandar Baru Bangi
Bandar Baru Bangi
Bandar Baru Bangi is a township situated in the district of Hulu Langat, in Selangor, Malaysia. It is named after the small town of Bangi situated further south. It is located between Kajang and Putrajaya and is about 25 km away from the capital city, Kuala Lumpur...
.

On 21 April 2007, sixteen months after the first step of the first revamp, a second major revamp was undertaken on the entire bus network on grounds of feedback from commuters who wanted the buses to ferry them from their housing estates direct to the city centre, that is with less or without much need to change buses in the middle of their journey.

RapidKL has also divided up the Klang Valley into six areas:

RapidKL's new bus system expects users to hop on more than one bus to complete a journey. This is unlike the previous RapidKL bus system and that still in use by other bus operators in the Klang Valley, where most bus services begin in the suburbs, follow a trunk route to the city, then perform a sweep in the city centre before terminating.

Instead, RapidKL's bus users are expected to use a combination of its four types of services to complete journeys. Local Shuttles take users in the suburbs to hubs, usually bus terminals or LRT stations, where users transfer to LRTs or trunk buses to continue their journeys to the city or elsewhere in the Klang Valley. The city centre is served exclusively by City Shuttles.

Effective 1 September 2009, all rapidKL buses will be issued a single journey tickets for their city shuttle (BANDAR), local shuttle (TEMPATAN) & express (EKSPRES) bus routes which replaced the daily unlimited ride tickets. As for trunk shuttle (UTAMA) bus route, the tickets will be issued based on the number of zones covered. For example, if a person travels across three zones on the trunk shuttle (UTAMA) bus route, the bus fare is RM 2.50 for single journey. The ticket must be kept while on board for inspection by rapidKL officials failure of which the ticket must be purchased again if the ticket is lost while on board during the inspection.


Note: Sales of the SEMUA and SEPADU tickets have been abandoned on 1 March 2008 and it is replaced by Touch 'n Go
Touch 'n Go
The Touch 'n Go or smart card is used by Malaysian toll expressway and highway operators as the sole electronic payment system . The credit card sized smartcard made of plastic with Philips' MIFARE microchip technology embedded in it....
card (except for concession fares). By 1 September 2009, all daily passes including BANDAR, UTAMA, TEMPATAN & EKSPRES have been replaced with a new zoning system. The Zonal Bus Fares is a single journey ticket.

Monthly travel cards or rapidpass are also issued and these may be purchased from all rail stations and bus terminals from the 24th to the 7th of every month. 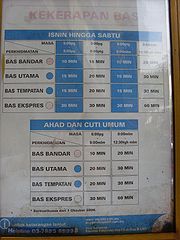 + Spouse and a total of 4 kids under 15 years old are allowed to accompany the pass holder FREE on weekends and public holidays.

Detailed schedules of bus services are not published, although headway information and operating hours is publicly available.

There are scheduled services that are not subject to the above headways.

BET is a system where the buses utilise less congested highways to link heavily populated areas and the city centre. Naturally, by using the highways, travel time is reduced as the highways are less congested than the normal routes. The service will have limited stops and rely on feeder buses and park-n-ride facilities to ensure sufficient ridership. With BET, travel time is expected to be reduced by up to 50 percent on certain BETs.

Buses for BET routes are about four to six buses initially and will be reviewed from time to time as the demand grows. BET is more of an enhancement to the current services, whereby the focus is more to shorten the travel time.